RIYADH: Ancient manuscripts held by the King Faisal Center for Research and Islamic Studies in Riyadh are a priceless treasure trove of religious, historical, scientific, and philosophical knowledge that has allowed scholars to unlock the region’s remarkable past.

Created long before the invention of the printing press in the 1400s, these writings have provided religious and academic authorities with rich insights into how Middle Eastern civilizations were born, flourished, and evolved and over many centuries.

These handwritten texts, many of them beautifully decorated by skilled calligraphers, with ornate illustrations and elaborate maps distinct to their era, are still pored over by librarians, scientists, archivists, and curators even to this day.

Everything from pre-Islamic hanging odes to the earliest editions of the Torah, the Bible, and the Qur’an were painstakingly compiled, often over many years and by multiple authors, all for the sake of preserving history.

KFCRIS has an extensive library of such artifacts, including more than 28,500 rare physical manuscripts and 120,000 photographed pieces.

Established in 1983, the center serves as a repository for the Faisal Family Archives and is today considered one of the foremost cultural collections in the Kingdom for its contribution to the humanities and social sciences.

“Asfar,” KFCRIS’ year-long exhibition which ends in February 2023, has featured some of the world’s rarest Arabic and Islamic texts, including 36 manuscripts and printed works carefully selected from 178,500 original and photographed pieces held in its archives.

The exhibition, named after the plural for sifr in Arabic, a Qur’anic word that means “large book” or “tome,” has put on display some of the world’s rarest texts and manuscripts dating back hundreds of years.

“The term ‘asfar’ could mean travels and voyages where the visitor can journey through the contents of a book,” Rasha Ibrahem Al-Fawaz, the center’s director of museums, told Arab News.

“The exhibition sheds light on the most distinct and unique of books and manuscripts at KFCRIS.

Divided into six sections, the first being the journey of knowledge, the exhibition tells the story of how science was transmitted across civilizations, while showcasing various manuscripts, one of which — “Kalila wa Dimna” — was owned by King Faisal.

The second section showcases three manuscripts that are more than a thousand years old, displayed as examples of Arabic calligraphy down the ages, including “Al-Bayan wa Al-Tabyin,” which translates as “Elegance of Expression and Clarity of Exposition,” by Al-Jahiz.

The next section showcases three works reflecting the contributions of women to their respective societies, including Bab Bashir, consort of Abbasid Caliph Al-Musta’sim, and Umm Al-Husayn bint Shihab Al-Din Al-Makki.

The fourth, “By the Author’s Hand,” exhibits nine works of copyists.

“The most distinct of the items showcased in this exhibition is a Mamluk Condex of the Qur’an, an endowment of Sitt Miska, the caretaker of Sultan Ahmed Qalawun,” said Al-Fawaz.

“One of the fourth section’s most unique manuscripts is ‘Kitab Al-Ibar wa Diwan Al-Mubtada wa Al-Khabar,’ by Ibn Khaldun.

“The fifth section, titled ‘Rare Manuscripts,’ showcases eight manuscripts, which are single copies in the world written by their authors, hence the title.

“One of these manuscripts, ‘Women News’ by Usama ibn Munqidh, an equestrian and an Arab poet who lived to the age of 96 years during the Ayyubid dynasty, specifically during the reign of Salahuddin Ayubi, the sultan of Egypt.

“The manuscript is one of many from his biography ‘Al-Itebar,’ and in it he mentioned that he wrote the ‘Women News,’ which was believed to be missing for many years until we discovered it in the center, and is under investigation and research where we will soon print it and distribute it.”

The sixth and final section, titled “Gutenberg’s World,” showcases ten printed books from Germany’s first modern printing press in the mid-15th century. According to Al-Fawaz, the most famous of the earliest prints is the Hamburg Qur’an, the second oldest printed copy of the holy book after the Venice copy.

Established in 1983, the center houses one of the Kingdom’s foremost cultural collections.

The “Asfar” exhibition is a showcase of some of the world’s rarest Arabic and Islamic texts.

The treasures obtained by the center constitute a precious national asset. Furthermore, the center has trained many Saudi scholars on the process of manuscript preservation and restoration using traditional methods.

“In 1986, experts specializing in paper manuscript and artifact restoration visited the center to train those working in the center in the field,” said Al-Fawaz.

“Since then, the center applies the traditional conservation methods according to UNESCO standards. The center has provided 20 training courses to government, private and international entities and we have annual training for men and women interested in working in the field. Last year, we trained eight men and women, some of which are college students.

“This is an important and rare field that achieves sustainability and preserves the treasures at hand.”

When visitors descend into the center’s basement, home to the treatment and restoration department, they can witness for themselves the crisp, clean laboratory where specialized staff test the ink, paper, and binding of old manuscripts.

With extreme care, each delicate page is examined, photographed, and tested using chemical solutions to ensure no damage is caused during the preservation process.

To minimize the rate of deterioration, experts first ascertain the ink’s stability, remove acidity, soften dry and yellowed papers, and reinforce weak materials. Holes are filled and tears are repaired.

Preservation of these delicate documents depends to a great extent upon the physical conditions in which they are stored. Fluctuations in room temperature and humidity can have a significant impact on papers and fabrics.

Maintaining a consistent level of humidity of around 40-60 percent and temperatures of 16-21 C under low-energy ultraviolet light is essential to preserving these rare items.

As soon as the documents have been treated and repaired, they are immediately packed away in boxes away from natural light.

“Manuscripts are the major source of information to know about the historical facts, cultural and old traditions of the past,” said Al-Fawaz.

“They are scattered all over the world and we’re privileged to have such a vast variety at KFCRIS. It’s our duty to protect such rare treasures and display them for all to examine their intricate details.” 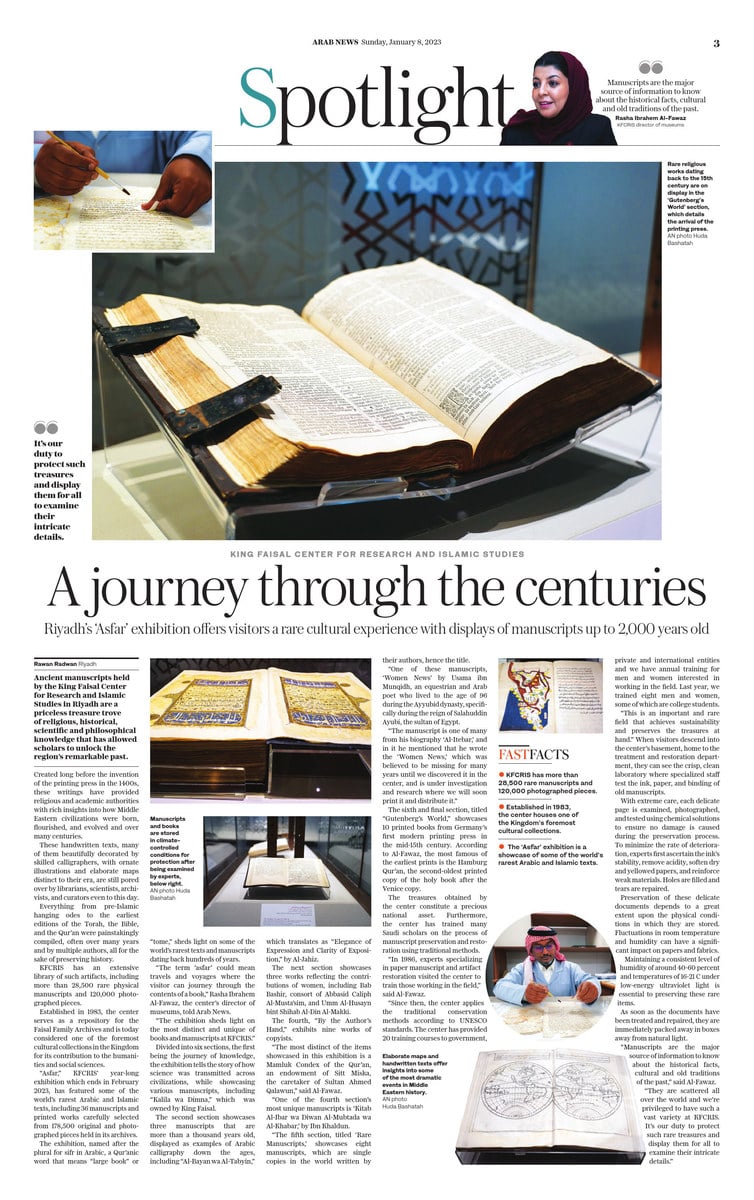