The home team stole an early march in the 31st minute when Yakob Sayuri latched on to Muhammad Rizky Pratama’s pass to put the team ahead in the first half.

PSM Makassar consolidated their position when Yuran Fernandes scored in the 54th minute, but eight minutes later, he was shown the red card following a second yellow card, dealing a blow to the team left to play with 10 players.

Fernandes’ send-off gave the upper-hand to KDA FC, who are coached by Aidil Sharin Sahak, and they almost reduced the deficit through Muhammad Al Hafiz Harun’s attempt in the 81st minute but his thunderous shot only rattled the goal post.

Muhammad Fayadh Mohd Zulkifli Amin gave hope to the Canaries squad with a goal in the 86th minute but it was not good enough as the Kedah team had to accept defeat, which ended their run in the AFC campaign this season.

Another PSM Makassar player Agung Mannan was shown the red card at the end of injury time.

See also  UFC 274: Dana White shuts down talk of trilogy between Esparza and Namajunas, says no one wants to see that rematch
Share on FacebookShare on TwitterShare on LinkedInShare on Reddit
asianewsdayAugust 9, 2022 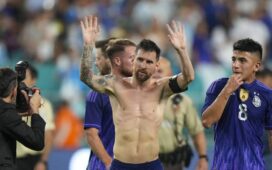 Messi at the double as Argentina streak continues with Jamaica defeat