Diligent research, a counterfeiting expert, an identical box and nerves as hard as the diamonds they stole helped a gang of audacious jewel thieves and con artists scam their way across Europe, pocketing stones worth almost €20m (£17m) and swindling a classic car collector out of €185,ooo.

But their sleight-of-hand skills and bundles of fake banknotes eventually caught the attention of police on both sides of the Pyrenees, and eight people were arrested at the end of December following a year-long joint investigation by Spanish and French police.

According to Spain’s Policía Nacional force, the eight people, who were arrested in the Paris suburb of Bondy, ran a so-called rip-deal scam, posing as wealthy buyers and using fake money to con their victims.

In January 2020, officers from the Catalan regional police force, the Mossos d’Esquadra, investigated the theft in Barcelona of a diamond valued at between €7m and €15m.

“The criminals pretended to be interested in buying the stone and used a distraction technique to swap the box containing the original jewel for an empty one,” the Policía Nacional said in a statement.

“At least three people were involved: a man posing as the buyer; a woman who claimed to be an expert gemologist brought in to authenticate the stone and a third man who was identified by the fingerprints left on the box handed to the victim.”

Once the trio was identified and traced to France, the Spanish forces sought the help of the French police. Phone taps in France established that the three people thought to be behind the Barcelona theft had been carrying out similar scams across Europe.

“The investigation revealed the existence of a very professional organisation whose criminal activities were very lucrative,” the statement said.

“They were specialists in rip-deal frauds and used a special bag with a false bottom and fake money to deceive their victims. They were well trained, experienced and on the lookout for new victims on an almost daily basis.”

Suspecting that the gang was about to sell one of the diamonds, officers from France’s Police Judiciaire arrested eight people and searched three properties, where they found a pink suitcase identical to the one used in the Cannes theft and envelopes containing fake banknotes.

The searches also yielded €10,000 in cash, two jewellery certificates, documents relating to the purchase of a house in Romania, a jeweller’s loupe, and a USB stick used to access a cryptocurrency wallet. 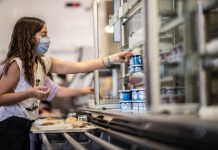 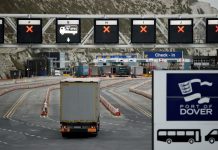 ‘It’s so unfair’: life on the streets of the French town branded as ‘lost to Islam’

Christians, Muslims and Jews to share faith centre in Berlin 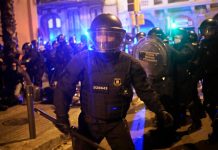 Barcelona rocked by fifth night of unrest over rapper's jailing

After a year of death and solitude, Italy is a sober, serious place