Despite pop singer Justin Bieber’s health break announcement, the Asia leg of his Justice World Tour is said to continue as scheduled. — Picture via Instagram/ AEG Presents Asia and justinbiebermusic.com

KUALA LUMPUR, Sept 7 — The Asia leg of Justin Bieber’s Justice World Tour is set to proceed despite Bieber’s announcement of a health break.

The organiser, AEG Presents Asia (AEG) has announced the news via their social media earlier today while also wishing the Baby singer a speedy recovery. 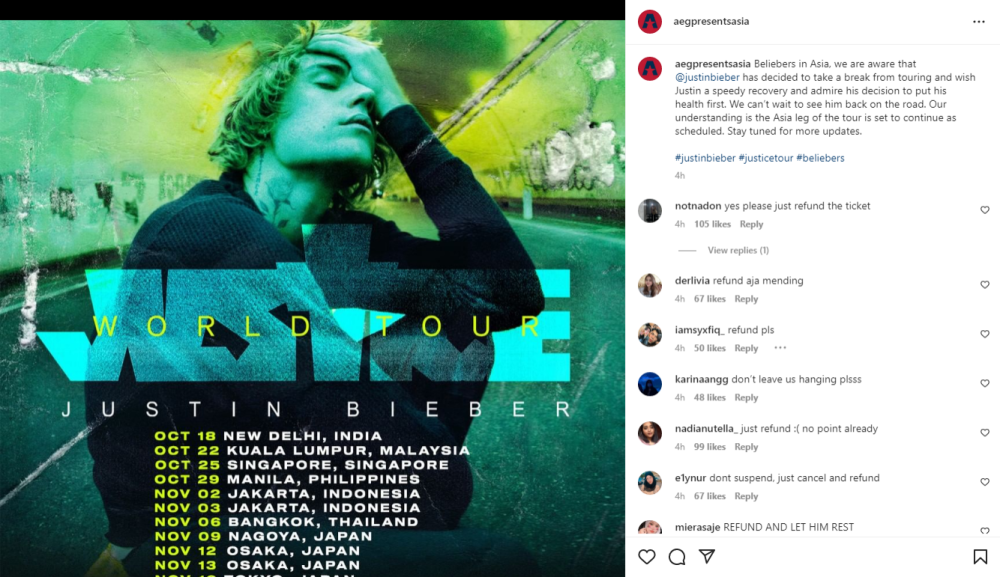 “Beliebers in Asia, we are aware that Justin Bieber has decided to take a break from touring and wish Justin a speedy recovery and admire his decision to put his health first.

“We can’t wait to see him back on the road. Our understanding is the Asia leg of the tour is set to continue as scheduled.

“Stay tuned for more updates,” they wrote in the caption.

AEG’s post on Instagram has garnered over 5,000 likes along with over 600 comments from social media users with some of them already asking for refunds.

The Canadian pop singer yesterday took to his Instagram to announce that he is taking a break from his rescheduled Justice World Tour due to mental and physical health issues.

He said that after his performance at Rock in Rio in Brazil, exhaustion has overtaken him and after following up with his doctors, family and team, Bieber decided to make his health a priority over his tour.

“I’m going to take a break from touring for the time being. I’m going to be okay, but I need time to rest and get better.

“I’ve been so proud to bring this show and our message of Justice to the world,” he said.

In June, Bieber disclosed that he was diagnosed with Ramsay Hunt Syndrome, which left half of his face paralysed, forcing him to cancel performances to recover.

He posted a video on Instagram explaining to viewers that he could not smile on one side of his face, but assured fans that he just needed time to recover.

Bieber is set to take the centre stage of the Bukit Jalil National Stadium on October 22.

See also  Shang-Chi and the Legend of the Ten Rings: Simu Liu, Tony Leung shine
Share on FacebookShare on TwitterShare on LinkedInShare on Reddit
asianewsdaySeptember 7, 2022