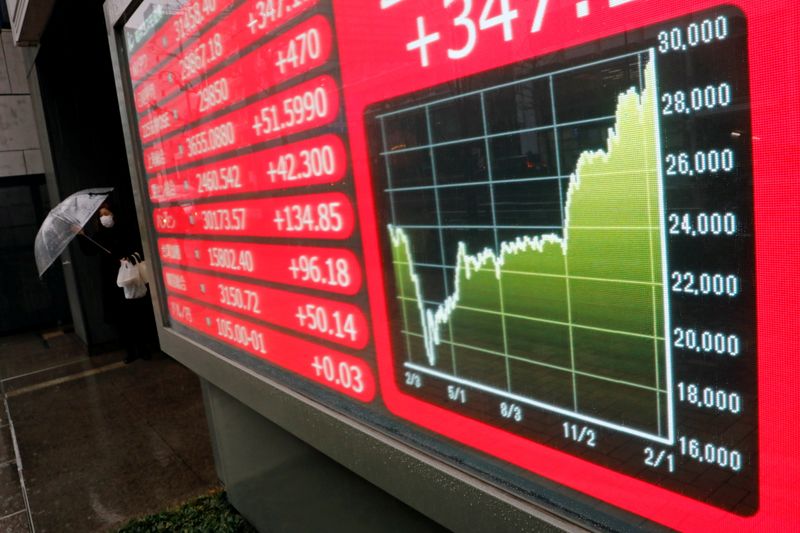 © Reuters. FILE PHOTO: A woman holding umbrella walks near an electric board showing Nikkei index at a brokerage in Tokyo

Europe’s eurostoxx 50 futures and futures were both up 0.2%, while futures for London’s were barely changed. E-mini futures for the were slightly lower.

MSCI’s broadest index of Asia Pacific shares outside of Japan was last down 0.1% at 733.9 from a record high of 745.89 touched on Thursday.

The index is on track for a small weekly loss after two consecutive weeks of gains.

Since the start of the year, the index has surged nearly 10.5%, largely led by easy monetary and fiscal policies around the world and initial rollouts of COVID-19 vaccines.

On Friday, Australia’s benchmark finished 1.3% down while fell 0.7%.

Chinese shares, which started the day in the red, recouped losses with the blue-chip CSI300 up 0.2%.

“It’s kind of odd to think that only a year ago investors were worried about depression and deflation and now they are worried about overheating and inflation,” said Shane Oliver, Sydney-based economist for AMP.

“The big picture backdrop of still low underlying inflation and spare capacity in jobs markets, combined with economic and profit recovery and low interest rates is a positive one for growth assets, particularly shares,” he added.

Germany’s 10-year yield on Thursday posted its highest close since June, British 10-year yields traded at a 10-month top of 0.65% and U.S. Treasury yields are hovering near one-year highs around 1.3%, a large factor supporting the U.S. dollar.

Rising bond yields hurt the appeal of gold, with spot prices hitting a seven-month low of $1,759.3 an ounce on Friday.

An unexpected increase in the number of Americans seeking jobless benefits weighed heavily on the outlook. The Labor Department reported initial unemployment claims rose by 13,000 to 861,000, injecting scepticism about how quickly the U.S. economy could rebound from the global pandemic.

In currencies, the dollar was steady with its index at 90.511.

The British pound held near its highest in over three years at $1.3983 led by the country’s successful vaccine programme which has seen 16.5 million people already inoculated. It is on track for a sixth straight weekly rise.

The euro is poised for a small weekly loss. The single currency was last at $1.2098.

The risk sensitive Australian dollar was on track for a third straight weekly rise, last trading at $0.7787.

In commodities, oil markets saw some profit-taking following days of gains that were driven by a deep freeze across Texas that weighed on production.

READ  Banks are begging for spare change: How long coin shortage could last 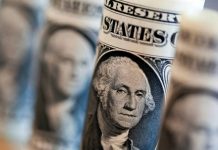 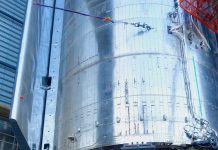 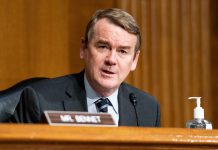 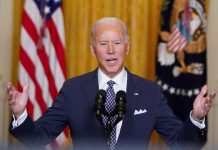 Biden says U.S. and Europe must push back against China's economic 'abuses and coercion'

'It has nothing to with who I am': Lower credit scores can make car insurance much pricier for Black, Latino and Indigenous Americans 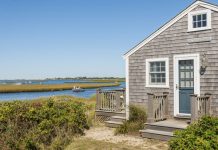 Ready to book your summer rental on Nantucket? You're too late 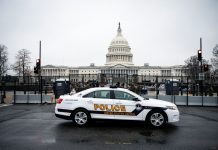 'It has nothing to with who I am': Credit scores can raise car insurance premiums, which takes a toll on Black Americans, Latinos 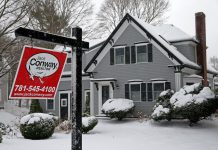