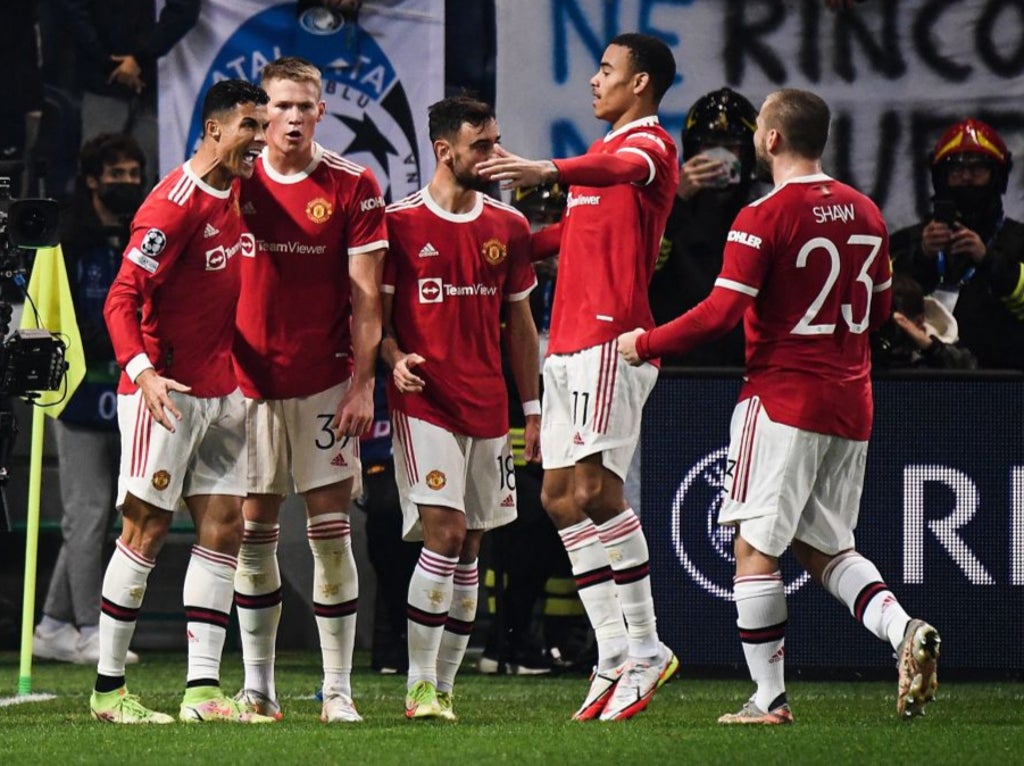 Follow all the action as Atalanta host Manchester United in the Champions League this evening.

A dramatic week has seen Ole Gunnar Solskjaer’s position become somewhat more secure after United’s 3-0 thrashing of Tottenham Hotspur led to the north London club appointing Antonio Conte as their new head coach. That removed one of the main contenders to replace Solskaer at Old Trafford, but it is by no means a long-term guarantee, with tonight’s match and Saturday’s Manchester derby set to be key in deciding the Norwegian’s future.

United produced a miserable first-half performance in the reverse fixture and trailed 2-0 last month, but a fightback, capped by Cristiano Ronaldo, saw the home side prevail 3-2 to maintain their position at the top of Group F. Victory tonight would be significant in securing the club’s safe passage into the knockout stages and Solskjaer urged his squad to rally together, regardless of whether they are starting or on the fringes. “I understand players want to play, no one is happy when they don’t play, but the squad morale is really good and it has to be,” he said. “It’s the team which has to come before any individual.” Follow all the latest updates live below:

50 mins: Mason Greenwood hits the post but he’s offside! Man Utd’s intent is already better. They’re moving the ball around the final third a lot quicker with short, sharp, one-touch passes. Rashford slips Greenwood into the box and he drills a shot onto the post but the offside flag is raised.

48 mins: Zappacosta drives down the right side but is tackled by Maguire and the ball goes out for a goal kick off the Atalanta man.

Man Utd lose the ball in midfield again and the home side fly up the pitch. It comes to Koopmeiners who shoots and fires his effort straight into Pogba. The ball loops into the box and drops for Zapata who tries to turn it into the back of the net but the offside flag goes up against him.

Kick off: No further changes from Manchester United but Atalanta have replaced Mario Pasalic with Berat Djimsiti. He slots into the back three with Marten De Roon pushed higher up into central midfield.

Villarreal are beating Young Boys 1-0 in the other Group F fixture. If they go on to win that game and Man Utd lose the Red Devils could be knocked out of the Champions League on Matchday Five when they face the Spanish side.

As it stands though United are still top of the group and will remain there if they avoid defeat tonight.

Chelsea remain on course to reach the Champions League knock-out phase after Hakim Ziyech struck in the second half against Malmo to secure a hard-fought 1-0 victory earlier tonight.

The Blues attacker tapped home after a wonderful cross by Callum Hudson-Odoi who continued his encouraging recent form to help Thomas Tuchel’s side clinch a third win in Group H.

Manchester United’s problems in the first half came from simple mistakes. I can’t count how many times they gave the ball away by misplacing easy passes. Paul Pogba has had a shocker so far. Cristiano Ronaldo has scored again but Eric Bailly has been United’s best player. He’s throwing himself in front of shots, closing down the ball quickly and getting stuck in at the back.

45+4 mins: Not the best 45 minutes for Manchester United but they’re heading into the break on level terms. Cristiano Ronaldo netted his fourth Champions League goal in as many games since returning to the club and cancelled out Josip Ilicic’s opener. The second half is set up perfectly.

45+1 mins: Oh yes they can! This is a brilliant move from Manchester United. McTominay knocks the ball up to Fernandes on the edge of the box. He gives it to Ronaldo who sends it across to Greenwood. Fernandes makes a run inot the box and Greenwood picks him out. He’s under pressure from Merih Demiral but manages to backheel the ball to Ronaldo who runs onto it and blasts it into the far corner! Great goal.

45 mins: Four minutes of added time to play. Can United get an equaliser before the break?

42 mins: Wan-Bissaka slips a pass into the right side of the box for Greenwood but he’s beaten to the ball by Palomino who knocks it out for a throw in. United then send the ball back to their defensive line and are forced back down the pitch.