Awkward exchange between Xi and Trudeau caught on camera 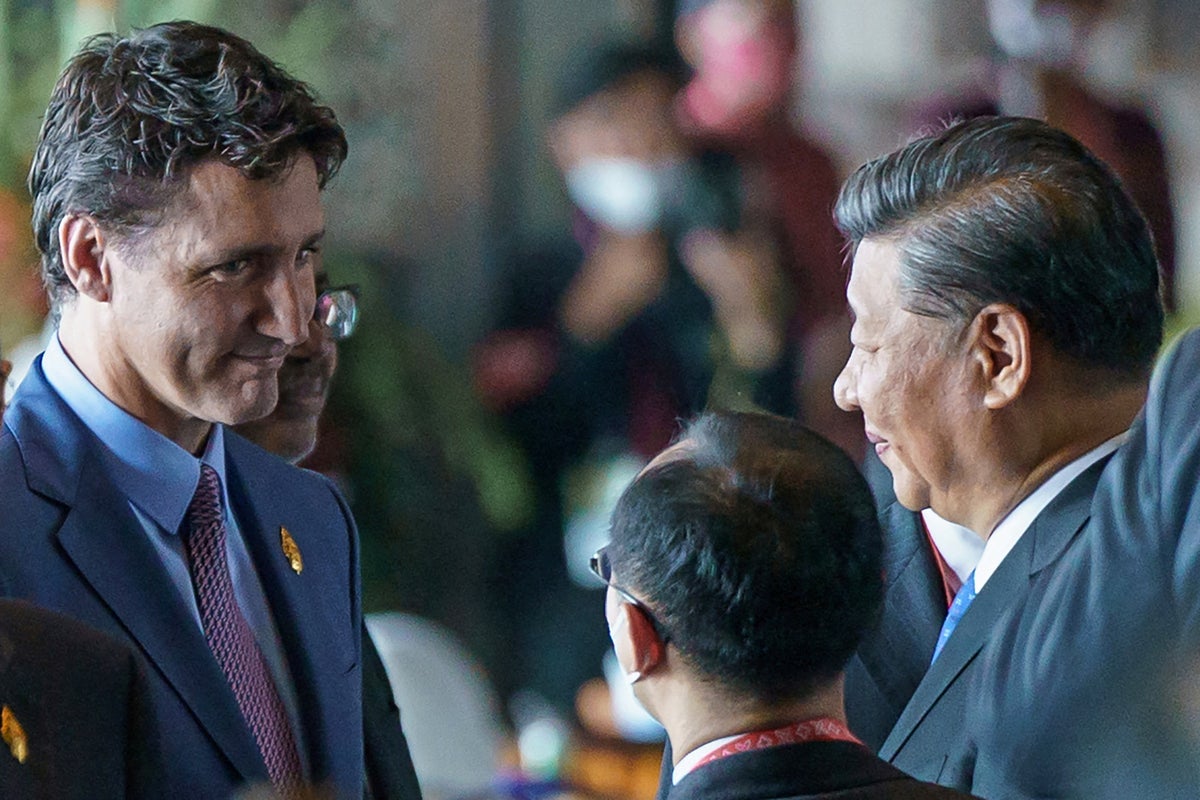 Xi Jinping and Justin Trudeau were caught having an awkward exchange on the sidelines of a G20 meeting in Bali after China’s president raised concerns about the details of their earlier talks being leaked to the media.

“Everything we discussed has been leaked to the papers and that’s not appropriate,” President Xi could be seen telling the Canadian leader through his translator. “That’s not the way conversation was conducted, if there is sincerity on your part (sic).”

Prime minister Trudeau, who nodded incessantly while looking at China’s head of state, responded sharply to the remarks.

“Well I do believe in free and open and frank dialogue we will continue to have. And we will continue to work constructively together,” he said as President Xi looked away from his gaze. “But there will be things we will disagree on and we will have to,” continued Mr Trudeau before being cut off by Mr Xi.

“Let’s create the conditions first,” said China’s president as the leaders shook hands and walked away.

The sharp exchange comes a day after Mr Trudeau raised “serious concerns” over suspected Chinese “interference activities” in Canada, in an apparent reference to the reports about their meddling in the 2019 election.

Mr Trudeau and Mr Xi also discussed Russia’s invasion of Ukraine, North Korea, and the importance of December’s summit in Montreal “to protect nature and fight climate change”, a government source was quoted as saying by Reuters.

Members of the G20 economies ended their summit on Wednesday with a declaration of firm condemnation of the war in Ukraine and a warning that the conflict is making an already delicate world economy worse.

“Most members strongly condemned the war in Ukraine and stressed it is causing immense human suffering and exacerbating existing fragilities in the global economy,” the statement said.

The use of the words “most members” was a telling sign of the divisions, as was an acknowledgement that “there were other views and different assessments” and that the G20 is “not the forum to resolve security issues”.

Even so, the statement’s use of language from a March UN resolution that deplored “in the strongest terms the aggression by the Russian Federation against Ukraine” and demanded “its complete and unconditional withdrawal” from Ukrainian territory was a big breakthrough, according to John Kirton, director of the G20 Research Group.

“Here the G20 left no doubt about who it knew had started the war and how it should end,” he said in an interview.

There was a noteworthy shift of tone towards China among the Nato members as French president Emmanuel Macron expressed hope that Beijing could play a bigger role in mediation of the war.

“I’m convinced China can play, on our side, a more important mediating role in the coming months, to prevent in particular a stronger return of ground assaults in early February,” Mr Macron told a news conference.

Mr Macron also said he had discussed with the Chinese leader the idea of a presidential visit to Beijing at the beginning of next year. His office confirmed the visit would take place if health restrictions related to the coronavirus pandemic allow it.

France, along with its Western partners, has tried for several months to persuade countries that have not openly criticised Russia for its invasion of Ukraine to take a tougher stance.

The comments come days after US president Joe Biden said there “need not be a new cold war” between US and China, following a three-hour summit meeting with President Xi.

“I don’t think there’s any imminent attempt by China to invade Taiwan,” he said despite the escalating rhetoric and aggressive military moves by China in Taiwan Straits.

Additional reporting from the wires