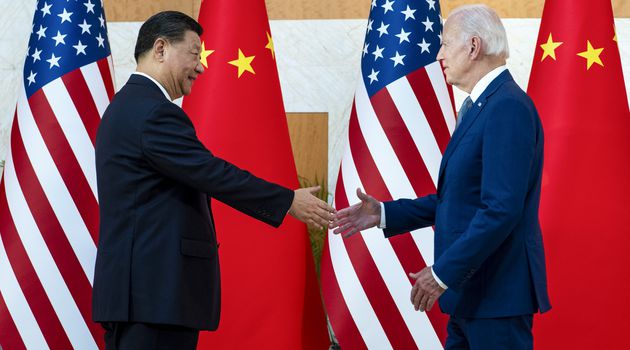 Joe Biden and Xi Jinping have agreed to step up diplomatic efforts to improve the relationship between China and the United States despite their dispute over Taiwan and intense economic and technological competition. The two leaders met for 3½ hours on the Indonesian island of Bali on Monday ahead of a G20 summit, their first in-person meeting since Mr Biden became president.

Mr Biden agreed to send secretary of state Antony Blinken to Beijing to follow up on the meeting and to open a regular channel of communication. He told reporters that his conversation with Mr Xi had been candid and open, adding that he did not believe that a new cold war with China was inevitable. “We’re going to compete vigorously. But I’m not looking for conflict. I’m looking to manage this competition responsibly,” he said.

Relations between Washington and Beijing have been worse in recent months than they have been for decades, particularly after House of Representatives speaker Nancy Pelosi visited Taiwan in August. China responded with a series of military exercises that showed how the People’s Liberation Army could encircle Taiwan.

Last month the United States introduced a sweeping ban on exporting advanced semiconductors to China, a move Beijing saw as an attempt to hobble its progress in the technological race. Speaking after he shook hands with Mr Biden at the start of the meeting, Mr Xi said the two sides had a responsibility to improve their relationship.

The White House said Mr Biden raised concerns about human rights in Xinjian, Hong Kong and Tibet, and criticised China’s “coercive and increasingly aggressive actions” towards Taiwan. But after a number of statements in recent weeks which appeared to question the US policy of strategic ambiguity on whether it would defend Taiwan against an invasion, the US president reaffirmed his commitment to the One China policy.

Mr Xi, who has refused to rule out the use of force to achieve unification with Taiwan, said China’s red lines on the issue must not be crossed.