What is Boris Johnson’s claim?

Boris Johnson has argued that the EU was seeking to “blockade one part of the UK, to cut it off” in justification of breaking international law and breaching the withdrawal agreement through the internal market bill.

The prime minister claimed in a Daily Telegraph article that the threat of a block on goods entering Northern Ireland from Great Britain had emerged as the two sides were thrashing out details of how the withdrawal agreement’s clauses on Northern Ireland would be implemented from 1 January.

Not really. The prime minister’s argument in favour of the internal market bill is a mixture of truth, untruth and conflation, although there are grounds to criticise the EU’s rather high-handed approach.

What is the truth?

Under the Northern Ireland protocol in the withdrawal agreement agreed and ratified last year, Northern Ireland will in effect stay in the single market and follow EU standards in goods at the end of the transition period, while the rest of the UK exits and does its own thing on standards.

Under the agreement, the EU’s customs code would also be enforced on goods entering Northern Ireland from Great Britain, although Northern Ireland would stay in the UK’s customs territory. This “in-out” arrangement was agreed in order to prevent a customs border being implemented on the island of Ireland.

In the event of a wider trade deal not being agreed by the EU and the UK this year, that could mean tariffs being applied to goods entering Northern Ireland from Great Britain if they are deemed “at risk” of entering the Republic of Ireland at a later point.

Tariffs would be repayable to importers where it could be proven that the goods had not gone over the border into the Republic. But tariffs and checks would be done in the first instance, creating barriers to trade between Northern Ireland and Great Britain.

This outcome was the reason Theresa May, as prime minister, had been adamantly against any such customs border between the four nations of the UK.

However, to make this more palatable to the British side, it had been agreed that a joint EU-UK committee would analyse the range of goods that move from Great Britain to Northern Ireland.

The negotiations on what goods are deemed “at risk” are ongoing. But under the Northern Ireland protocol agreed by Johnson, a failure to agree on it would end in a default position of all goods entering from Great Britain being regarded as “at risk”, and therefore attracting tariffs.

The prime minister has said that this would be an “extreme interpretation of the Northern Ireland protocol” and that it would “impose a full-scale trade border down the Irish Sea”. In reality, it is simply what was agreed.

But Johnson is no longer comfortable with what was agreed. The internal market bill would overrule key clauses, leaving the decision of what is “at risk” in the hands of British ministers.

Is it just tariffs that the prime minister is concerned about?

No. “We are being told that the EU will not only impose tariffs on goods moving from Great Britain to Northern Ireland, but that they might actually stop the transport of food products from GB to NI,” he writes.

Here, the prime minister is bringing in an entirely separate issue and not one that is solved by the internal market bill.

In order for British exporters to move agricultural produce into the EU’s single market, including Northern Ireland, Brussels needs to give “third-country approval” to the UK regulatory regime. It is a health check. For example, a country must have a salmonella control programme for chickens to be imported.

The EU has said the UK has so far failed to provide sufficient details of the so-called sanitary and phytosanitary regime for animal and plant products post-Brexit. The UK government says the EU has ample information. Either way, there is nothing in the internal market bill that would resolve this particular dispute. Critics argue that the prime minister has a habit of not letting facts get in the way of a good story.

Activists protest ban on distributing food to migrants in Calais 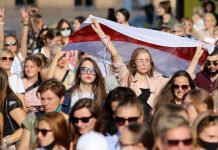 Can democracies stand up to Facebook? Ireland may have the answer | John Naughton

We lost the Brexit fight – now we must listen to voters, Ed Davey urges Lib Dems

Brexit: EU citizens in UK could be shut out of vital services