Cancer-stricken father of bride gets wish to see daughter get married, dies later that night


Stricken with cancer and bedridden, one father in Singapore got his last wish to see his daughter get married.

He participated in the couple’s tea ceremony held at the hospice on Oct 30 and passed away peacefully later that night, Shin Min Daily News reported.

According to the Chinese evening daily, the couple had originally intended to get married on Nov 11.

While it could have been resolved with surgery, Sng shared that her father also had heart problems which made it too risky for him to undergo the operation. They then decided to proceed with chemo and radiotherapy.

His condition stabilised at first, but took a turn for the worse about a month ago, where the family was told that he had slightly over three months to live.

He was then transferred from the National University Hospital to Assisi Hospice.

Sng and her mum were devastated by the grim prognosis.

“We then began discussing whether my father had any unfulfilled wishes,” Sng told Shin Min.

Sng’s mum told her that her father’s biggest wish was to see her get married, “but if we weren’t ready then there’s no need to force it”.

The coupe decided to hold the ceremony as soon as possible, after discussing it with her fiance as well as his side of the family who was supportive of the idea.

“Henry [Sng’s dad] became bed-bound after he was diagnosed with cancer and his wish was to attend his daughter’s wedding tea ceremony,” wrote Ambulance Wish.

Staff at the hospice linked Sng up with Ambulance Wish Singapore, who shared about the ceremony in a Facebook post on Oct 31. 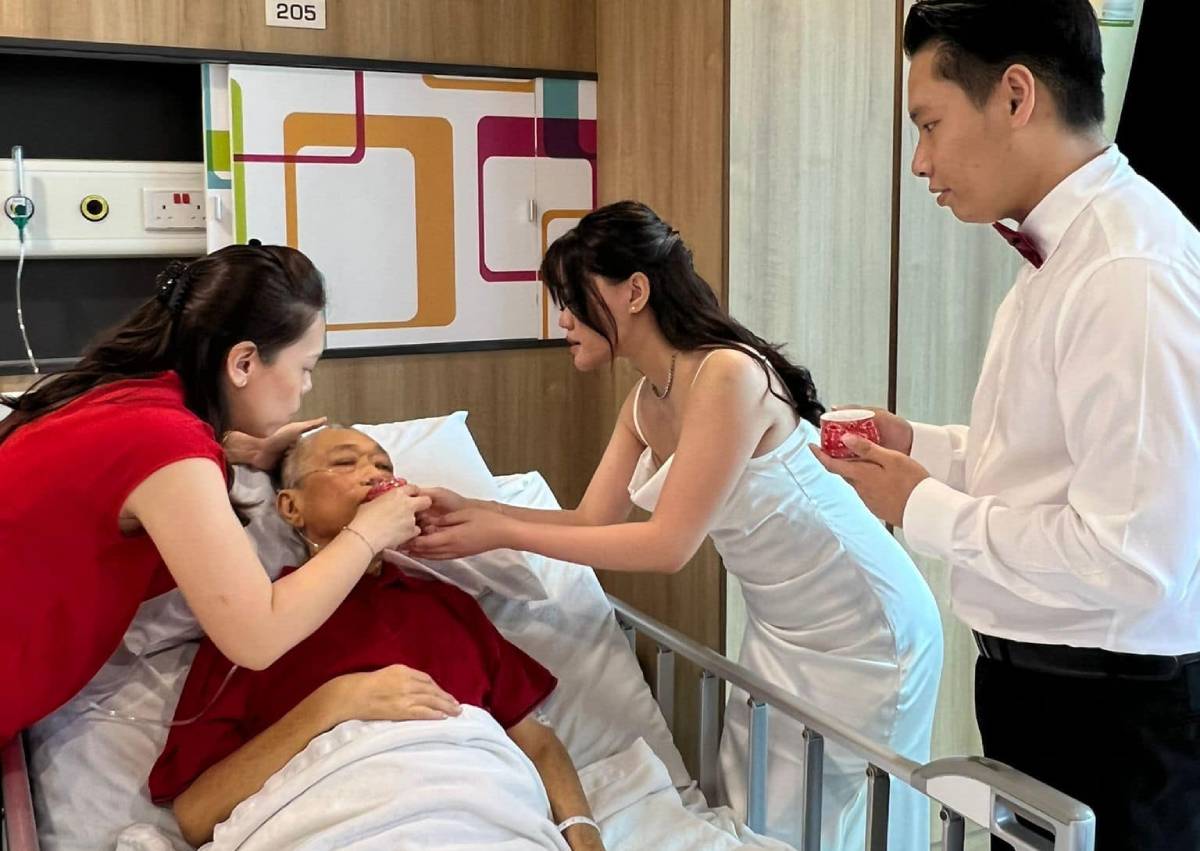 More than the gratitude she felt, Sng was also awed by the result.

“It turned out even better than I’d expected,” she shared.

“Within three short days, they were able to help arrange for a room, a make-up artist, bouquet and settle the tea set and decorations among other things,” said Sng.

With special permission granted from the hospice, around seven family members were allowed to witness the ceremony.

A particularly heart-tugging moment was when Sng’s fiance handed her father the tea.

Wrote Ambulance Wish Singapore in its post: “When the groom said to Henry ‘Papa, tea for you’ we knew, though Henry was looking tired, his heart must be beaming with joy as he sipped down the tea. It was a moving sight to behold.”

Sng, the eldest of six kids, also described how her father attempted to hold the cup with both hands. “At that time he was already unable to eat normally but he still finished the tea,” she shared.

The family believes that Sng’s father had left peacefully after having his dying wish fulfilled.

Sng told Shin Min that the couple’s ROM ceremony will now be held on Dec 18 instead and it will be a simple affair at home. Their wedding banquet will be postponed till next year.

Shin Min Daily News reported that following Henry’s funeral, Sng and her mother donated $500 to Ambulance Wish Singapore in his name as a token of appreciation and in hopes that it can help support others in getting their last wishes fulfilled.