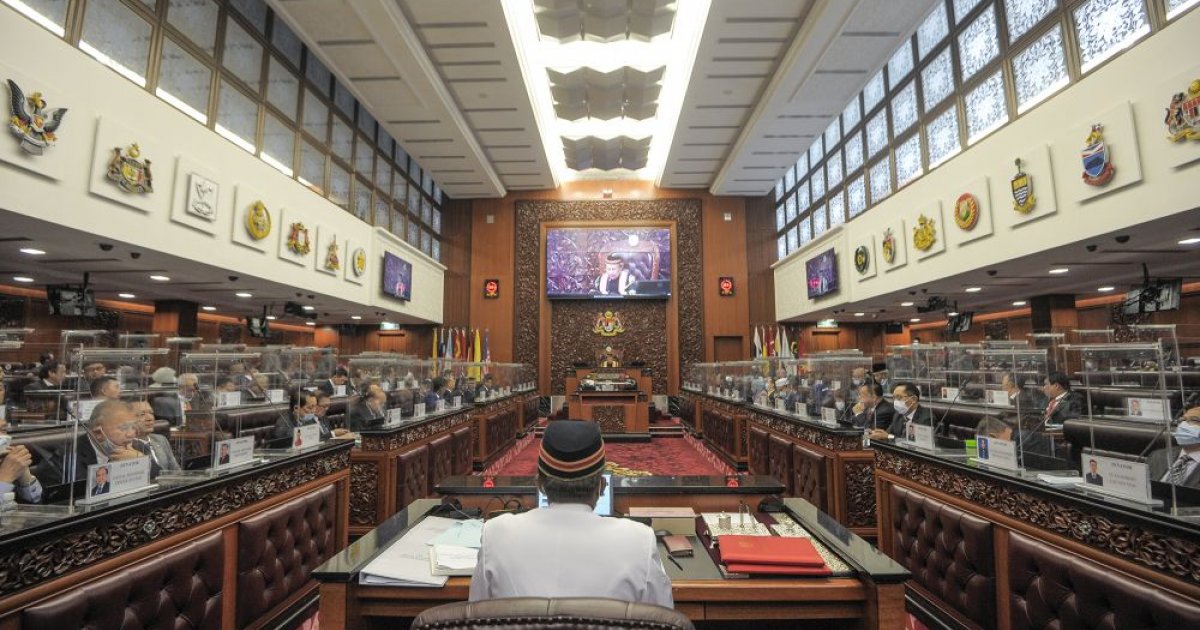 KUALA LUMPUR, June 14 — The Malaysian government’s plans to study a hybrid Parliament model — involving a combination of physical and online processes — is a welcome move, with the model already successfully adopted in the United Kingdom, civil society groups have said.

When asked about the government’s move to only study a hybrid Parliament model at this stage, when the Covid-19 pandemic has been ongoing since last year and with five months of Emergency already gone, Fann’s response was: “It is of course late, but as they say, better late than never. The UK Parliament met in a hybrid way from April 2020, at the start of the pandemic.”

With the prolonged Covid-19 pandemic crisis, Fann said there is “no certainty when we can gather safely”, while also noting that Parliament “as the legislative branch of government cannot remain suspended any longer”.

“We can look to many other countries where they have improvised how their Parliaments continued the business of lawmaking even at the height of the pandemic.

“In particular, we can learn from the British Parliament where they began hybrid sitting back in April 2020 by observing social distancing of at least two metres in the chamber and the rest connecting via Zoom from their homes,” he said.

Fann said Malaysia is capable of rolling out a hybrid Parliament.

“Bersih 2.0 believes that if there is political will on the part of the government, we have the technical capabilities to conduct hybrid sittings and the legal obstacles can be overcome through amendments to existing laws and Standing Orders.

“We hope that the proposed study would be expedited and presented to the Cabinet as soon as possible so that Parliament can reconvene at the latest soon after August 1, 2021 when as promised, the Emergency is lifted,” he added.

Asked if Bersih 2.0 would want Parliament to reconvene through a hybrid model before the Emergency’s scheduled end date about two months later on August 1, Fann said: “Most definitely. I said at the latest August 1 but if it can happen earlier it would be better.”

The UK Parliament’s website lists the timeline of temporary arrangements starting from April 21, 2020 that have been carried out to ensure Parliament could carry on safely during the Covid-19 pandemic, as well as a general overview of the main changes made including allowing all MPs to participate remotely in Parliament business such as debates.

Voting in the UK Parliament during the pandemic includes having MPs tap their passes on electronic readers in dedicated lobbies to register an “Aye” or “No” vote and leaving immediately these lobbies after voting, and voting by proxy.

The schedule for Malaysia’s Dewan Rakyat or the lower House of Parliament was heavily disrupted last year, with Covid-19 cited by the government as the reason for deferred sittings.

Last year, the Dewan Rakyat was set to have its first meeting of the year on March 9, but this was deferred to a one-day sitting on May 18 where the Yang di-Pertuan Agong delivered his royal address and with the ongoing Covid-19 pandemic cited as the reason for no debates or questions being allowed or any Bills being tabled.

The usual days of debates were skipped entirely for the first meeting. The second meeting of the Dewan Rakyat was later carried out on July 13 to August 27, while the third meeting was from November 2 to December 17.

Prior to the Dewan Rakyat reconvening on July 13, 2020, civil society and the federal Opposition repeatedly pressed for a virtual Parliament to enable much-needed laws to handle Covid-19 to be passed, but this was not implemented by the government.

To show that virtual Parliament sittings were possible and workable, several youth groups came together to organise the two-day Parlimen Digital initiative on July 4 and July 5, 2020 to provide a simulation of what a Parliament sitting would look like if carried out online.

Organised by non-partisan youth groups Challenger Malaysia, Undi18, Liga Rakyat Demokratik, in collaboration with United Nations Association of Malaysia (UNAM) Youth, the Parlimen Digital platform gathered 222 youths online to debate on the Microsoft Teams platform for two days on policy recommendations for Malaysia to tackle Covid-19, similar to how MPs would actually do so in Parliament.

Since last year, Parliament has not been reconvened as it typically would, as it has been suspended under the nationwide Emergency in place from January 11 to August 1.

Qyira Yusri, a co-founder of Undi18 and one of Parlimen Digital’s organisers, said she welcomed the minister’s announcement on the government looking into the concept of a hybrid Parliament.

“This is a model that has been successfully executed in the UK, whose model of Parliament we mirror (the Westminster system),” she told Malay Mail when contacted.

Asked about the government’s move to only study the hybrid Parliament model at this point in time with more than a year of Covid-19 pandemic locally and over five months of Emergency, Qyira suggested that this could have been due to public calls for the government to resume Parliament sittings.

“Of course, the recent announcement shows that the government does have the capacity to look into the feasibility of this. It’s clearly only becoming a matter of priority now that so many parties, including civil society organisations and high-ranking politicians in the government’s coalition are calling for Parliament sittings to be held.

“Youth have already marched to the streets to demand for Parliament to open, so the pressure is very high for the government to at least attempt and consider pivoting how a Parliament sitting can be held,” she said.

As for the hybrid Parliament concept, Qyira noted that Undi18 has always felt that democracy must be upheld, and even more so during a pandemic.

“Parlimen Digital has proven that the tools and technicalities to run an online sitting with proper debates are possible. Not to mention that if the Malaysian Parliament and Law Ministry put resources into it, surely they can have a better setup than we did.

“There are many types of platforms to use to have successful hybrid sittings, but the most important aspect would be having security mechanisms in place to prevent outsiders coming in, plus ensuring that all MPs who are dialing in have good internet bandwidth.

“I hope that the MPs dialing in would attempt to do so from their constituency, then we might be able to even highlight access to the internet (killing two birds with one stone),” she said.

As for Parlimen Digital’s experience last year such as whether it was able to do the same things as an actual Dewan Rakyat sitting such as voting, debate regulation and timekeeping with a timer to let MPs know how long they have left in their allotted time to speak, Qyira said the youth-led initiative was able to do all of that.

“Many video conferencing tools have the option to do all these within the app already, even if not — there are many ways to do online polling on resolutions/collect questions through more apps. As long as the MPs and Parliament have digital devices and internet, this can be done,” she said.

As for an actual Dewan Rakyat sitting having other elements to take into account such as duration of debates, Qyira said that it was of course much easier to design a simulation, but went on to say that it does not mean that a digital Parliament cannot be done, noting: “And that ultimately was the point for our project.”

“I suggest that the debates’ style be amended to reflect its digital format. Which is why the study is good timing. They should compare how other countries are managing this, because it’s not a problem unique only to Malaysia.”

Qyira confirmed that Parlimen Digital took one month to organise. It kicked off the application process on June 1 with more than 6,200 youths applying, and by June 20 had announced the list of 222 digital MPs aged 15 to 33.

On June 24, the economy and education motions were announced to have received the highest votes out of eight motions given to the youths to select. On July 4 and 5, the digital MPs successfully debated and voted on the motions in three-hour and four-hour proceedings respectively streamed ‘live’ on Facebook, earning much praise from the public including the oldest MP and the youngest female MP in the current Dewan Rakyat.

As for when Parlimen Digital and Undi18 hope the hybrid model being studied by the Malaysian government would become a reality in order for Parliament to reconvene, Qyira said: “Honestly, it should be done as soon as possible.”

“I think if Parliament can convene either through a virtual or hybrid manner, there is no more reason for there to be an Emergency unless the government is worried about a vote of no confidence,” she said.

And asked if she would want Parliament to reconvene either through a fully virtual or a hybrid model perhaps even before the Emergency officially ends on August 1, Qyira said: “Yeah. I think Parliament should be one of the highest priorities for the government.”

Previously on May 27, the Dewan Rakyat’s Deputy Speaker Datuk Seri Azalina Othman Said said the only way for Malaysia to move forward during the Emergency is to reconvene Parliament.

She listed simple standard operating procedures to enable this, such as ensuring all Parliament staffers are vaccinated against Covid-19, investing in virtual Parliament and speech-to-text systems, which she said would not be costly.

She also indicated that Health director-general Tan Sri Dr Noor Hisham Abdullah has no objection to Parliament reconvening virtually, citing a chat that she had with him.

On June 4, Takiyuddin said he, the Speakers and Deputy Speakers of both the Dewan Rakyat and Dewan Negara had agreed in principle to a hybrid Parliament, adding that it was decided that further studies would be carried out on the concept for the preparation of a paper to be brought in the near future for the Cabinet’s consideration and approval.

On June 7, Dewan Negara president Tan Sri Rais Yatim said a special committee is looking into how to implement hybrid Parliament sittings, including by looking at the experiences of other countries such as the UK and Australia.