In the second round of bidding for February, Certificate of Entitlement (COE) prices fell across all categories.

Get data on past COE bidding exercises at our 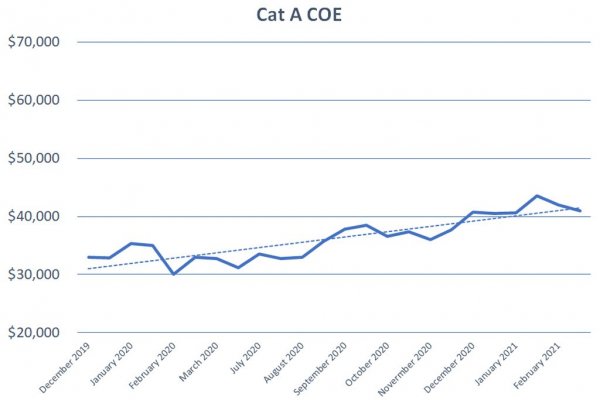 This second fall in premiums for the category mean the current premiums now stand at 14.3 per cent above the 12-month trailing average.

The number of unsuccessful bids this round exceeded the available quota by only 36 per cent. This figure has averaged 52 per cent for Cat A in the last 12 months. 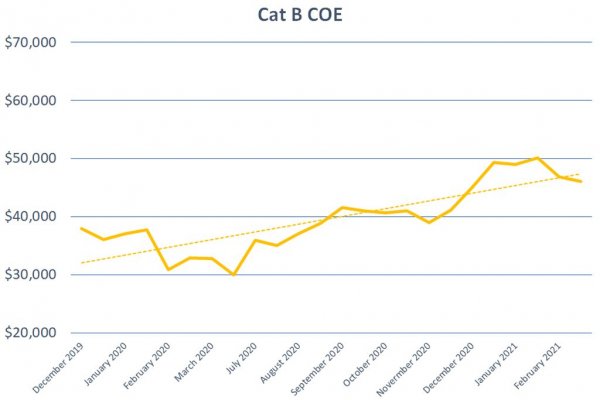 Premiums for Cat B, for larger cars with more than 130bhp or engine displacements larger than 1,600cc, likewise dropped slightly from the new highs reached at the start of the year. This bidding round saw Cat B premiums fall by $788 (1.7 per cent) to end at $46,002.

This slip sees the premium for this bidding round settling into the 82nd percentile of the 12-month trailing average, at 16.7 per cent higher than the average for premiums of the last 12 months.

The total bids received this round sees the number of unsuccessful bids exceeding the quota available by only 24 per cent, far below the 12-month average of 52 per cent.

The number of unsuccessful bids this round exceeded the available quota by 64 per cent, in line with the 12-month trailing average of 62 per cent. 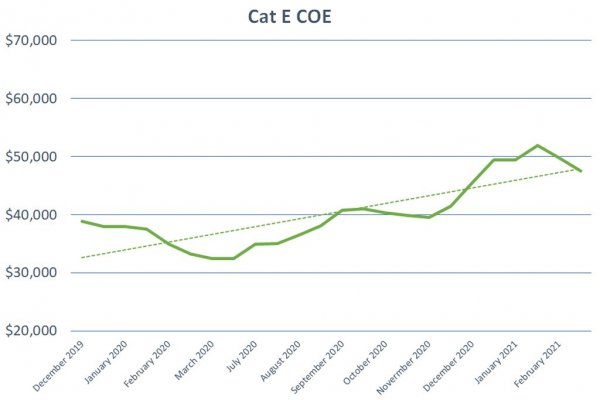 The premium for this bidding round now stands at 18.7 per cent above the 12-month trailing average and is at the 82nd percentile of the premiums of the last 12 months.

The number of unsuccessful bids this round exceeded the available quota by 65 per cent, which is higher than the 12-month trailing average of 53 per cent.

*The 12-month trailing average only takes into consideration the months wherein there was active COE bidding.

The Prevailing Quota Premium is the amount to be paid for COE renewal and is computed from the moving average of the previous three-months of COE prices. Those looking to renew the COE on their cars will thus have to pay the following prices for the respective months.


This article was first published in sgCarMart.