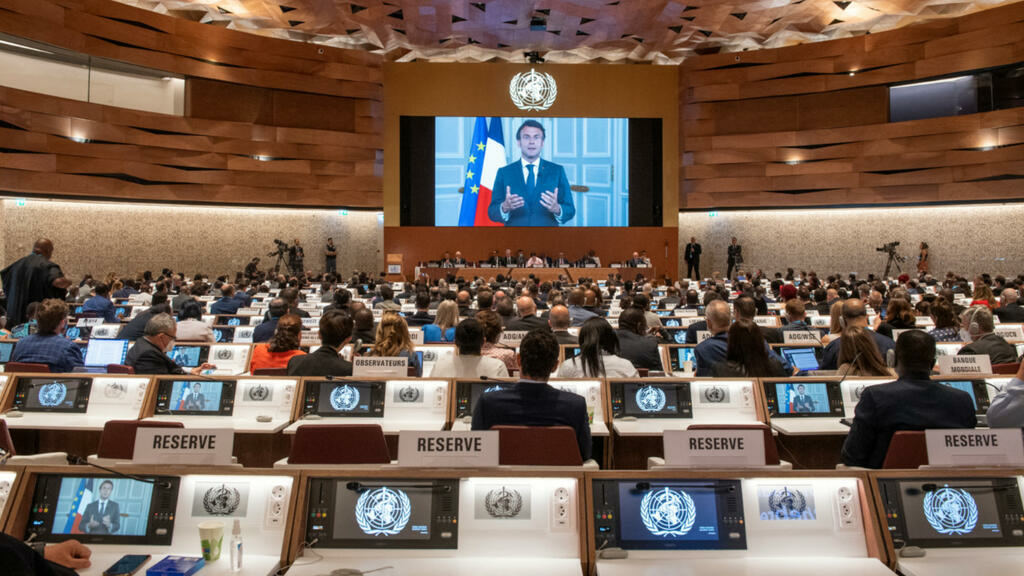 “The consequences of this war are devastating, to health, to populations, to health facilities and to health personnel,” French President Emmanuel Macron told the UN health agency’s 75th World Health Assembly.

In a video address, he called on all member states to support a resolution to be presented by Ukraine and discussed by the assembly Tuesday, which harshly condemns Russia‘s invasion, especially its more than 200 attacks on healthcare, including hospitals and ambulances, in Ukraine.

“Health must never be a target,” Swiss Health Minister Alain Berset told the assembly at an opening ceremony featuring interventions from five presidents and a number of government ministers.

The resolution will also voice alarm at the “health emergency in Ukraine”, and highlight the dire impacts beyond its borders, including how disrupted grain exports are deepening a global food security crisis.

But while Russia has been shunned and pushed out of other international bodies over its invasion, no such sanctions are foreseen at the World Health Assembly.

“There’s not a call to kick them out,” a Western diplomat told AFP, acknowledging the sanctions permitted under WHO rules are “very weak”.

The assembly, due to run through Saturday, marks the first time the WHO is convening its 194 member states for their first largely in-person gathering since Covid-19 surfaced in late 2019.

The Ukraine conflict is far from the only health emergency up for discussion this week, with decisions expected on a range of important issues, including on reforms towards strengthening pandemic preparedness.

“This meeting is a historic opportunity to strengthen universal architecture for security and health,” Dominican Republic President Luis Abinader Corona told the assembly.

Among the decisions expected at the assembly is the reappointment of WHO chief Tedros Adhanom Ghebreyesus to a second five-year term.

His first term was turbulent, as he helped steer the global response to the pandemic and grappled with other crises, including a sexual abuse scandal involving WHO staff in the Democratic Republic of Congo.

But while the former Ethiopian health minister has faced his share of criticism, he has received broad backing and is running unopposed, guaranteeing him a second term.

Several leaders speaking Sunday hailed Tedros, with Kenyan President Uhuru Kenyatta saying he showed “exemplary leadership and commitment during one of the most challenging periods” the organisation has gone through.

There will be no shortage of challenges going forward, with the Covid-19 pandemic still raging and demands for dramatic reforms of the entire global health system to help avert similar threats going forward.

And new health menaces already loom, including hepatitis of mysterious origin that has made children in many countries ill, and swelling numbers of monkeypox cases far from Central and West Africa where the disease is normally concentrated.

One of the major reforms up for discussion involves the WHO budget, with countries expected to greenlight a plan to boost secure and flexible funding to ensure the organisation can respond quickly to global health threats.

The WHO’s two-year budget for 2020-21 ticked in at $5.8 billion, but only 16 percent of that came from regular membership fees.

The idea is to gradually raise the membership fee portion to 50 percent over nearly a decade, while WHO will be expected to implement reforms, including towards more transparency on its financing and hiring.

The remainder came from voluntary contributions that are heavily earmarked by countries for particular projects.

“It will be important for WHO to implement reforms quickly,” US Ambassador to the United Nations in Geneva Sheba Crocker said.

Amendments are being considered to the International Health Regulations — a set of legally binding international laws governing how countries respond to acute public health risks.

And negotiations are underway towards a new “legal instrument” — possibly a treaty — aimed at streamlining the global approach to pandemic preparedness and response.

But leaders and experts warn the reform process is moving too slowly.

“We know that time is running out,” Berset said.

“At its current pace, an effective system is still years away, when a pandemic threat could occur at any time.”

See also  I love the UK and would like to stay (please). But you need a few lessons on being Danish | Sofie Hagen

Russia-Ukraine war: what we know on day 123 of the invasion

Russia-Ukraine war: what we know on day 121 of the invasion