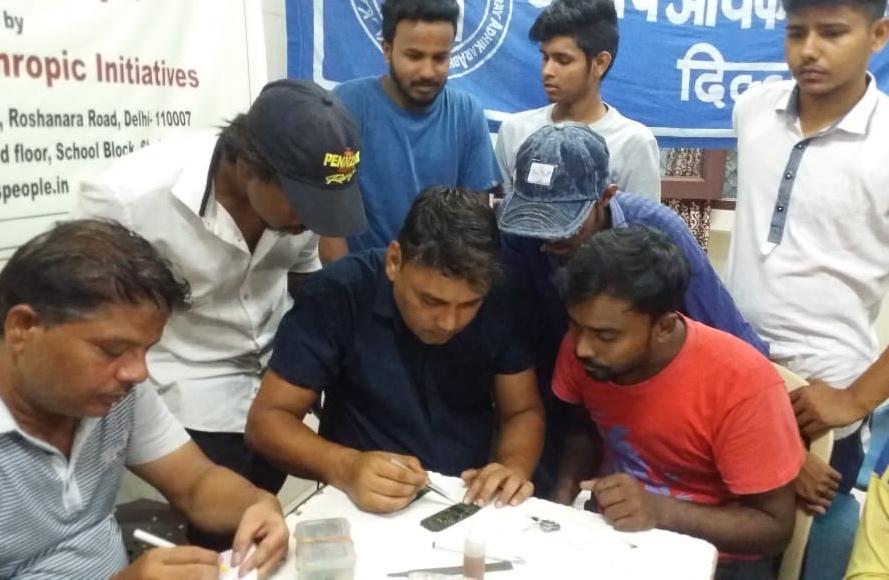 The largest homelessness charity in Delhi is offering rough sleepers a course in mobile-phone repairs that gives them support and skills to get off the streets.

With India offering some of the cheapest mobile data in the world, smartphone ownership has spread across all levels of society, and an estimated 70 per cent of homeless people own a mobile phone.

Now charity workers are putting this technological literacy to good use by plugging the gap in demand for services such as screen replacement, component repair and reassembly.

The scheme has been welcomed by London charities supported by The Independent and Evening Standard’s Christmas appeal.

Delhi is home to almost 19 million people, more than 100,000 of whom are estimated to be homeless.

The month-long course is run by the Aashray Adhikar Abhiyan (AAA) charity, after which participants receive a certificate backed by the Indian government’s Khadi (handicrafts) and Village Industries Commission.

Trainees are selected from its 15 shelters across the city. They are taught to identify faults in mobile phones, to solder certain parts of the device where possible and, if not, to replace damaged components, during an intensive schedule of workshops lasting 10 hours a week.

Of the 20 people who took part in the pilot course this summer, four went on to jobs in mobile-phone repair shops and two set up their own businesses. The charity hopes to run the course again next year.

Anil, 25, took part in July after almost six years living on the streets. Like many of Delhi’s homeless population, he was drawn to the city seeking a well-paying job. But the job he got meant he could not earn enough to house himself.

Now with his new skills he hopes to launch his own business. “It is my dream to have my own shop, a mobile repair centre in my own name,” he told The Independent.

“I would have a regular schedule, a routine – I’d know what time I have to open up the shop in the morning, I’d know when I have to close at night.”

AAA’s director, Sanjay Krishna, said that Delhi’s homelessness issue is too equated with the very visible issue of begging on the city’s major roads. His charity estimates that 90 per cent of homeless people in Delhi are in fact workers, taking jobs on construction sites and at markets as they come.

The centre, which is run by Church Army, provides classes in activities ranging from crafts and DIY to a professional catering start-up that supplies London offices and conferences, all run by homeless clients.

Ms Middleton said: “It’s about feeling independent and there’s something they can achieve … Many of them feel ostracised or they’ve failed, so this says: ‘You’ve got something valuable to give.’”

This year’s Christmas campaign is for The Homeless Fund, which will finance desperately needed services. The campaign will highlight the worst instances of homelessness globally, with money raised going to help homeless projects in London. Click here to donate.

Nissan to launch slew of new vehicles in China over next five years, CEO says

How do children fight off the coronavirus?