He had just changed the bonnet of his car a month ago but unfortunately, Mother Nature had other plans.

An Instagram video shared by Sgfollowsall on Tuesday (Aug 16) showed a bolt of lightning striking a tree along Tagore Road at Upper Thomson a day ago.

From the dashcam footage, branches from the damaged tree flew across the road and hit this driver’s BMW as it drove past.

The 30-second clip later showed dents on the car’s bonnet and doors.

“Even my lightning-fast reactions couldn’t avoid this,” the driver lamented, adding that the incident had left him “sick in the stomach” after he had just replaced the car bonnet less than a month ago.

But the damage to his vehicle could have been worse, according to the driver.

“If I drove faster, the branch would have cracked through the front windscreen,” he said.

In the comments, netizens agreed that the BMW driver was down on his luck.

“Glad the driver is safe,” a netizen said, while adding that the driver should buy a lottery ticket to turn his luck around.

There were others who wondered if the driver could be compensated for his damages. 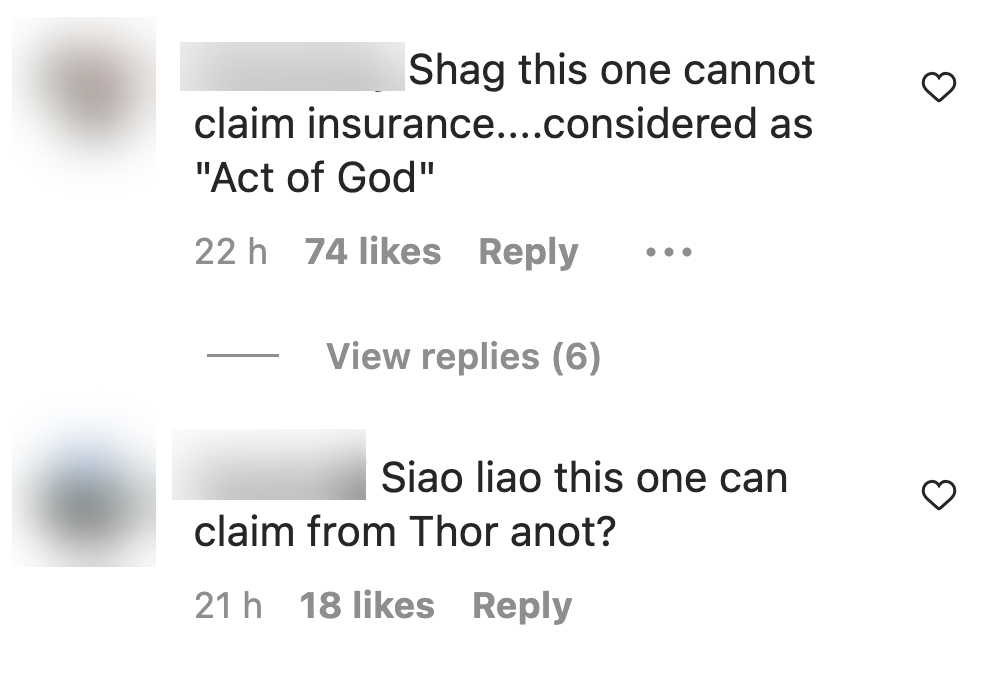 Besides accidents on the road, a comprehensive car insurance should also cover damages from natural causes and unforeseen circumstances such as fire, floods and storms, according to an article by ValueChampion.

But consumers will have to pay a higher premium than other insurance plans to attain this kind of coverage, ValueChampion added.

In another similar accident in February, branches from a fallen tree narrowly missed a man while he was parking his car in Punggol.

Describing how the branches pierced his car windscreen and the right window, the 54-year-old told Shin Min Daily News then: “A few more centimetres and I wouldn’t be here now.”

And in another close shave, a family of three emerged unscathed in Feb 2020 even though a huge tree fell on their car in Dhoby Ghaut.

The incident also caused a traffic jam for about two hours while workers cleared the debris and removed the tree, the Straits Times reported.