Students from poor families are suffering amid the global health crisis as their families can’t afford internet services — they’re missing out on school and the poverty cycle wears on.

That’s precisely what stakeholders are worried about — the digital divide, the glaring fault of a system that, inevitably, favors the well-to-do over the poor. It’s not the direction education wants.

Choi is a single mother with two children trying to keep up with their studies online.

But, to do so, they’ve to become Wi-Fi squatters, hanging out where there’s free internet, which is usually available for a limited time.

All classes are online. Schools have been closed since February as the city is at war with Covid-19.

The battle is still going on and Choi’s 13-year-old daughter and 10-year-old son are collateral damage.

“They (two children) are frustrated by the weak Wi-Fi signal at home on their mobile phones,” said Choi.

The family lives in a subdivided flat in Kwai Chung, Kowloon. Choi works at a restaurant. She and her kids rely solely on her income and monthly government subsidies.

The rent comes with wireless internet, but it’s weak and often can’t handle stream video. The family can’t afford mobile data to catch up on the children’s online education.

Thus, McDonald’s and 7-Eleven stores have become their classrooms. They go there to learn, using the free wireless networks. 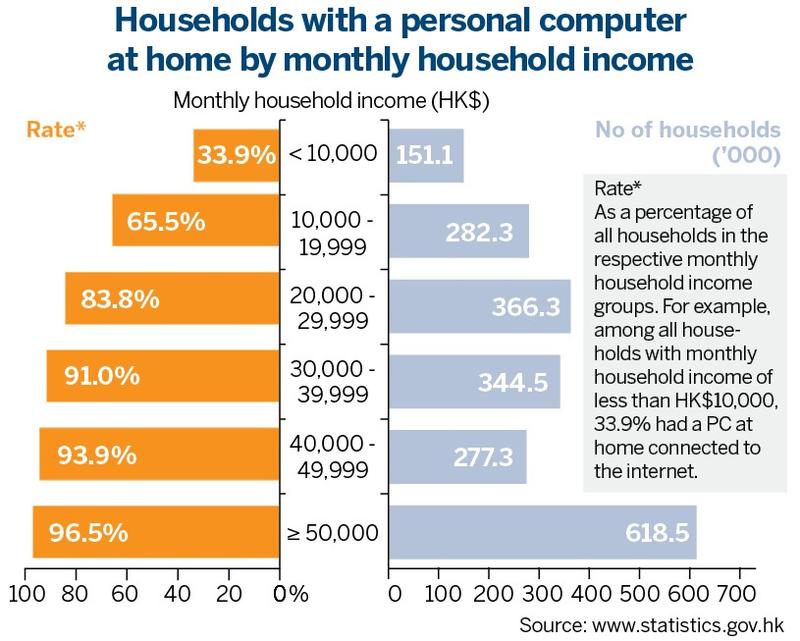 However, it’s not a good solution.

Online classes normally go on for 40 minutes or more. Free Wi-Fi at 7-Eleven outlets is limited to 30 minutes a day. One minute Choi’s daughter is in on a group video chat, the next minute she’s gone — offline.

It’s all happening at a time as people stay at home to keep themselves safe from the coronavirus, and it’s no comfort to Choi when her kids are out, going from place to place trying to access the internet.

“But, I’ve no choice. I can’t prevent them from learning.”

Choi is worried, but she feels all she can do is to keep admonishing: “Wash your hands, keep a safe distance from other people”.

The Alliance for Children Development Rights ran a survey of 286 primary and secondary students from grassroots families from February to early March.

It found that more than 65 per cent of students study on their mobile phones during the pandemic. Fewer than 10 per cent of them said there’re no digital devices at home and they can’t take online classes. 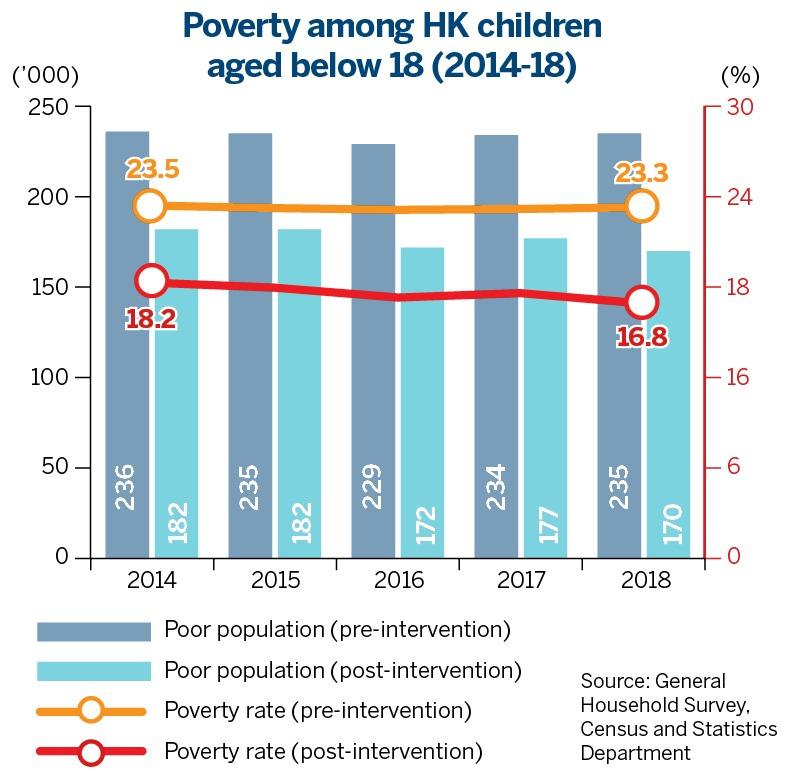 Celest Chan Wing-yin, assistant principal of the Salesians of Don Bosco Ng Siu Mui Secondary School, told China Daily the school in February found dozens of students having trouble with remote learning. Some had no mobile phones, and some had no internet access at home.

The circumstances that let kids from grassroots families fall behind disturbed Chan and her colleagues.

“Schools should provide equal opportunities for students to study even under exceptional circumstances,” she said.

The school bought SIM cards with data for the kids and urged families and school alumni to donate old computers to help low-income students.

According to Charles Chan Kin-hung, the school’s executive director, 51 SIM cards had been handed out by early April. Eighteen second-hand computers were donated along with four new laptops. 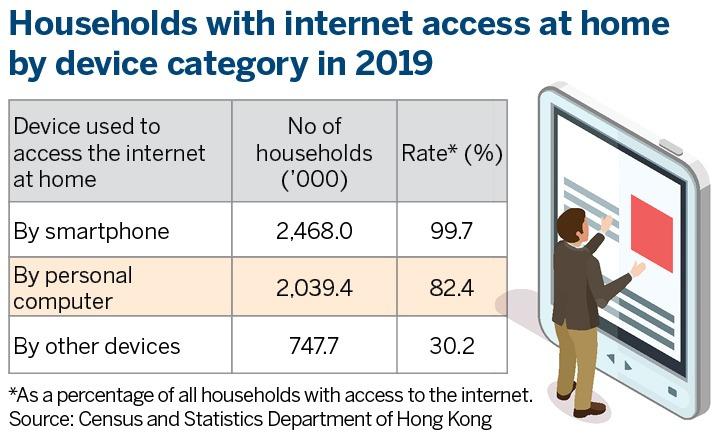 With the club’s free SIM cards now available, Choi’s children are doing better and can study at home. Some other children are less fortunate.

Though the situation is improving, it’s not over yet. Celest Chan in early April said her school still hasn’t collected enough devices for all the students in need.

She hopes Hong Kong people can help underprivileged families. “I hope grassroots students can make full use of the digital resources we have today,” she said. 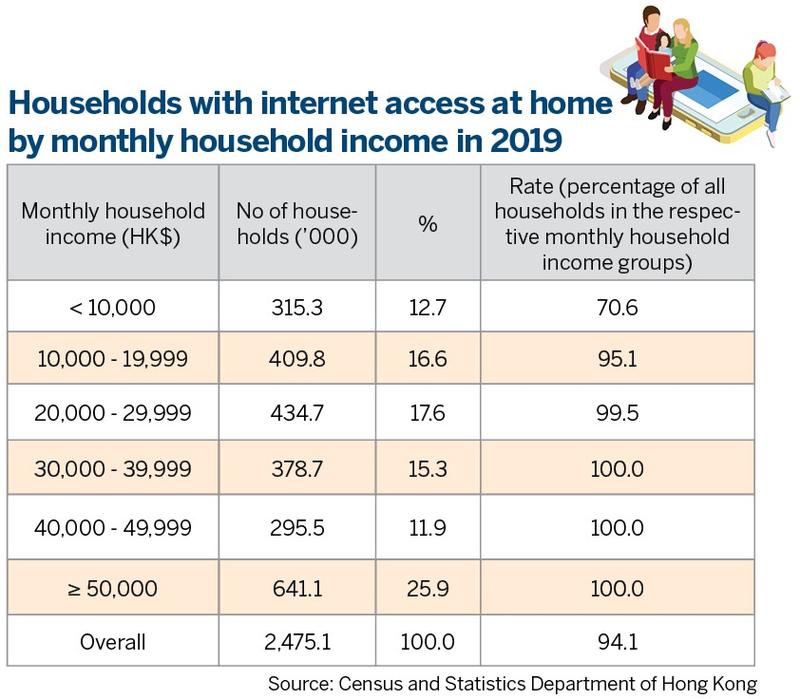 Given that people are more likely to depend on the internet, online learning is becoming a mainstream avenue for learning, said Gary Wong Chi-him, a non-official member of the government’s Commission on Children.

If the government and the community cannot provide digital resources for poor families, children from these families will never be at peace with the digital world, he lamented.

“The digital divide and the gap between the rich and the poor will widen.”

Scant digital resources will only compound the poverty of underprivileged families, and the lack of digital know-how among children and parents will widen the wealth gap.

The invisible impact of this day-to-day reality has been brought into the full glare of publicity.

But, the impact of the deficiencies will make things worse, Hong Kong Federation of Education Workers President Wong Kwan-yu warned.

With teachers absent, well-educated parents can help their kids with their schoolwork at home. Wealthy families can bring in tutors.

“But, the grassroots families cannot provide such abundant resources to their children,” he said.

Thus, the homework gap, as well as the gap among schools, will get wider as the long school suspension drags on, Wong observed.

Currently, there’re few effective ways to relieve the plight of poor students other than to equip them with the digital resources they need, he said.

School closures, followed by online classrooms, have meant chaos for kids whose families can’t afford what they need.

Maybe, from all this, Gary Wong hopes, some good can emerge – if the government finally accepts that digital access for all children must be guaranteed.