This article is an on-site version of our #techFT newsletter. Sign up here to get the complete newsletter sent straight to your inbox every weekday

This has been one expensive cab ride for Didi Chuxing. The Chinese ride-hailing group travelled to New York for its $4.4bn IPO in June, but on Friday said it would be delisting, turning round and driving to Hong Kong for an IPO there.

Didi had borne the brunt of China’s decoupling from US capital markets as Beijing cracks down on the country’s leading technology groups. Regulators had ordered Didi’s app be taken off domestic app stores, it was banned from signing up new users and subjected to a wide-ranging government investigation into its cyber security practices.

Its shares had tumbled from the June IPO price of $14 to $7.80 at the New York close on Thursday. Its announcement contributed to Hong Kong’s Hang Seng Tech Index falling as much as 2.7 per cent on Friday. Ecommerce group Alibaba dropped as much as 5.4 per cent and internet group Tencent lost as much as 3.3 per cent.

Lex says China fears local businesses represented in America will give the US access to sensitive information and believes that Big Data has become a strategic resource.

Tom Mitchell comments that Didi could no longer escape the kind of party discipline China’s president Xi Jinping had imposed across the mainland over the past decade and on Hong Kong over the past few years. Chinese regulators would probably have had reservations about Didi listing in Hong Kong, rather than Shanghai, before a new national security law was imposed on the territory.

Still, a lack of clarity from Beijing has meant initial public offerings in Hong Kong have raised less than $26bn this year, down 10 per cent compared with 12 months ago and more than a fifth lower than 2020’s total, according to Dealogic data.

The Internet of (Six) Things

1. Alibaba challenged by Gen TikTok
Tech doesn’t always need a regulator to disrupt it. Eleanor Olcott reports the live-streaming shopping market, which was first pioneered by Alibaba in 2016, is disrupting its main businesses, Taobao and the more upmarket Tianmao. The value of goods sold through livestreams will double this year to Rmb2tn ($313bn), according to analysts.

2. FTC sues to stop Arm deal
US regulators have sued to block Nvidia’s multibillion-dollar acquisition of UK chip design company Arm from SoftBank, one of the most serious threats yet to a deal that has already run into scepticism from EU and UK authorities. The Federal Trade Commission said the cash and stock transaction — which has a valuation of $82bn and would be the largest takeover of a semiconductor group — would give Nvidia too much control over the market.

#techFT brings you news, comment and analysis on the big companies, technologies and issues shaping this fastest moving of sectors from specialists based around the world. Click here to get #techFT in your inbox.

3. SoftBank and celebrities glory in God
Here’s a smaller SoftBank investment, but with some of the biggest names, including God. London-based Glorify is an app that helps Christians connect to God and its $40m series A funding round includes SoftBank, Andreessen Horowitz, reality TV star Kris Jenner and singers Michael Bublé and Jason Derulo.

4. Russia’s VKontakte comes under state control
The country’s largest social media network VKontakte has come under state control after a series of deals gave a majority stake to companies linked to state-run gas monopoly Gazprom. The Kremlin has recently stepped up its decade-long campaign to assert control over the internet.

5. Japan’s digital minister says tech is stifled
The minister in charge of Japan’s new digital agency has blamed decades of conservative regulation for holding back the country and declared that technological ambitions were being stifled by its “laws, systems and customs”. In an FT interview, Karen Makishima said Tokyo had moved too slowly to loosen rules on emerging technologies, stifling companies and industries in areas where they might otherwise be global leaders.

6. Apple’s meme stock moves
Puzzling activity in the group’s shares this week has strategists pointing to a possible cause: an explosion of trading in options linked to one of the world’s most valuable companies. The moves have been accompanied by a few of the hallmarks of the “meme stock” craze this year, traders said.

The latest release from Canadian smart-light brand Nanoleaf, Lines is a collection of backlit, 30cm-long LED strips, reports Jamie Waters for How To Spend It. You join them together in whatever shape you please and attach them to the wall (they have hexagonal, sticky-backed connecting blocks) in a painless set-up process.

“Rather than being a primary light source, the luminous sticks [from £180] excel at creating a mood,” he says. “Nanoleaf says they can change into 16m different colours; you can alter the hue and the rhythm of the lights (solid, flashing, gently flickering), and sync them to shift in time to music or the TV through a smartphone app or by pressing a button on the lights.”

#techAsia — Your guide to the billions being made and lost in the world of Asia Tech. Sign up here

#fintechFT — The latest on the most pressing issues in the tech sector. Sign up here 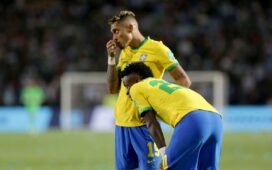