Curiosity saved the cat, this time.

A customer in China was rescued from the clutches of death after relying on his better judgment when faced with a strange-looking octopus at the dinner table.

According to South China Morning Post (SCMP), the deadly blue-ringed octopus — one of the most dangerous sea animals — had somehow ended up being served at a restaurant in Guangdong, China.

The toxic creature is described by multiple online sources as “small but deadly”, with enough venom to kill 26 human beings in a matter of minutes, according to the Ocean Conservancy website.

A photo which the diner posted to his Weibo account on Jan 16 showed several raw small octopuses on a bed of ice, ready to be added to a hotpot. 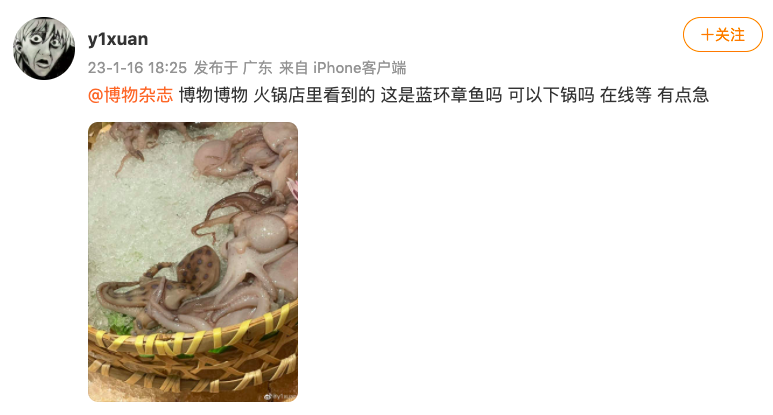 Tagging the account of a natural science magazine, the man asked: “Saw this in a hotpot restaurant. Is it a blue-ringed octopus? Can I eat it? I am waiting for your reply. A little anxious.” 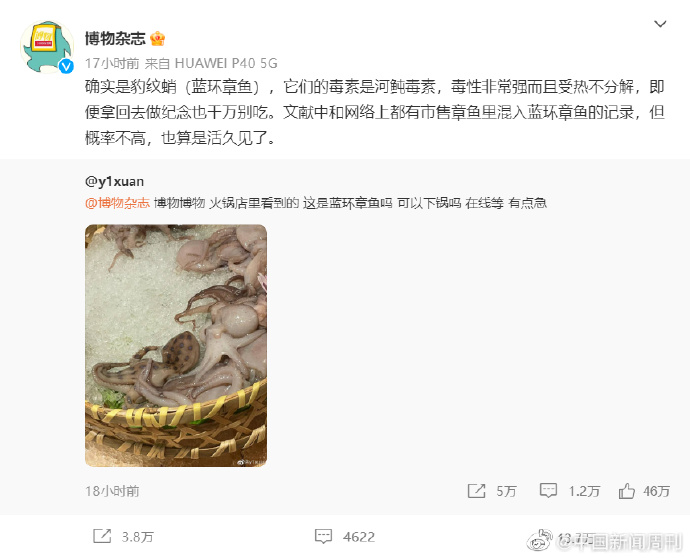 Thankfully, the reply from the account came in time, confirming that the cephalopods cannot, indeed, be eaten.

“It is a leopard-striped octopus or blue ringed octopus,” the comment read, with the Weibo user adding that the poison from the blue-ringed octopus cannot be neutralised by heat.

“Even if you take it home as a keepsake, you must never eat it,” noted the account-holder, described by SCMP as a science and education blogger.

The blogger also shared how there have been documented cases of blue-ringed octopuses being accidentally mixed in with regular octopuses when sold at markets. However, the user expressed that it’s a rare occurrence.

Fellow Weibo users who saw the blogger’s reply were immediately concerned for the welfare of the diner, reported SCMP.

“Are you ok? You didn’t eat it, right? Quick, tell the boss that the octopus can’t be eaten,” wrote one commenter.

They breathed a sigh of relief when the diner eventually replied: “I haven’t eaten it. It has been taken away from the table.”

The terrifying story went viral in China, reported SCMP, with 420 million views on Weibo. The sequence of events appeared to leave users shaken.

“Knowledge can change one’s fate. If it were me I’d have eaten it,” one user bemoaned, while another noted, “This is a close brush with death.”

Others hoped that the same thing would not happen to others, with many urging the diner to lodge a police report against the restaurant.

“Call the police, this is too scary,” one user stated.

“What’s worrisome is if the restaurant owner is a penny-pincher, and ends up serving the dish to another customer,” shared another.

Back in 1984, a six-year-old boy in Singapore died after he was believed to have been bitten by a blue-ringed octopus at East Coast Park.

It was believed to be the first death caused by such an octopus in local waters then.

In March 2021, an American tourist in Bali, too, shared her uncomfortably close encounter with the highly-venomous creature.

A TikTok video showed the user posing, and playing, with a blue-ringed octopus in her hand, as she described being unaware about her unwitting dance with death. The video quickly went viral.

“Woman nearly meets God without realising it,” captioned another user who reposted the original clip.