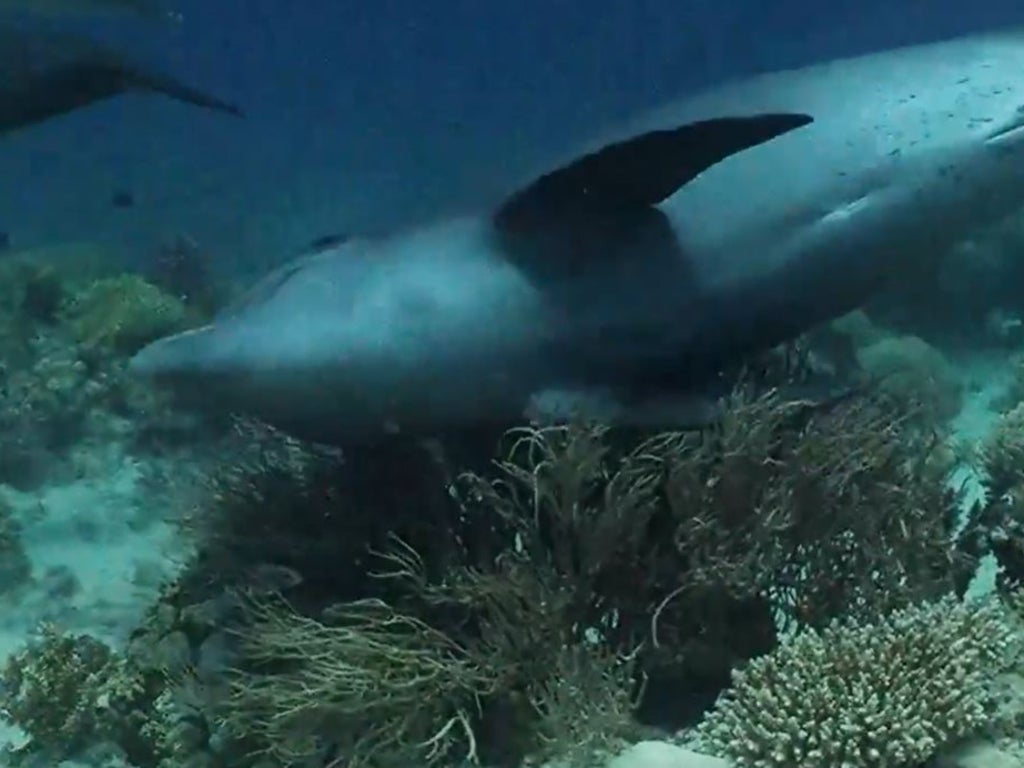 New footage shows dolphins queuing up to treat skin ailments at coral reef “clinics”, in behaviour researchers say is the equivalent of humans showering after getting out of bed.

The intelligent mammals can be seen lining up nose-to-tail to scratch themselves against the outcroppings and the tactic has been detailed in a new study.

Researchers have now shown that the corals have medicinal properties, suggesting that the Indo-Pacific bottlenose dolphins are using the marine invertebrates to treat skin conditions.

Dr Angela Ziltener, a wildlife biologist at the University of Zurich in Switzerland, first observed dolphins rubbing against coral in the Northern Red Sea, off the coast of Egypt, about 13 years ago.

She and her team noticed that the dolphins were selective about which corals they rubbed against, and wanted to understand why.

Dr Ziltener, who co-authored the study published in iScience, said: “I hadn’t seen this coral rubbing behaviour described before, and it was clear that the dolphins knew exactly which coral they wanted to use. I thought, ‘There must be a reason.’”

Most dolphin research is conducted from the surface of the water, but because Dr Ziltener is a diver, she was able to study the dolphins up close.

It took some time to earn the trust of the pod, which she was able to do in part because the dolphins were not phased by the large bubbles released by her air tank.

Dr Ziltener said: “Some dolphins, like spinner dolphins in the Southern Egyptian Red Sea, are shyer regarding bubbles.”

Once the pod allowed her to visit them regularly, she and her colleagues were able to identify and sample the corals that the dolphins were using.

Dr Ziltener and her team found that by repeatedly rubbing against the corals, Indo-Pacific bottlenose dolphins were agitating the tiny polyps that make up the coral community, and these invertebrates were releasing mucus.

To understand what properties the mucus contained, the team collected samples of the coral.

When study lead author Professor Gertrud Morlock and her team used state of the art equipment to analyse samples of the gorgonian coral Rumphella aggregata, the leather coral Sarcophyton sp. and the sponge Ircinia sp. they found 17 active metabolites with antibacterial, antioxidative, hormonal, and toxic activities.

This discovery of the bioactive compounds led the team to believe that the mucus of the corals and sponges is serving to regulate the dolphin skin’s microbiome and treat infections.

Prof Morlock, an analytical chemist and food scientist at Justus Liebig University in Germany, said: “Repeated rubbing allows the active metabolites to come into contact with the skin of the dolphins.

“These metabolites could help them achieve skin homeostasis and be useful for prophylaxis or auxiliary treatment against microbial infections.”

The reefs where the corals are found are important places for the local dolphin populations, according to Dr Ziltener.

She said: “They head there to rest and to have fun. Many people don’t realise that these coral reefs are bedrooms for the dolphins, and playgrounds as well.”

In between naps, Dr Ziltener says the dolphins often wake to perform the coral rubbing behaviour.

She said: “It’s almost like they are showering, cleaning themselves before they go to sleep or get up for the day.”

But since she began researching dolphins in Egypt in 2009, Dr Ziltener has noticed a disturbing trend.

She said: “The tourism industry makes a lot of money now out of dolphin swimming. People are dreaming of swimming with the dolphins, so they are figuring out which reefs they use and disturbing the dolphins if they don’t follow the guidelines for how to approach them in a responsible way.”

Dr Ziltener said she was so concerned that she has started an organisation called Dolphin Watch Alliance, a conservation group that educates tour guides, tourists, and the public on how to give tourists experiences that are safe for dolphins, and has lobbied for the reefs to become protected areas.