What is chicken rice without chilli sauce?

Enough to send one customer spiralling into a rage, after discovering that his delivery order was missing the all-important chilli sauce packets.

According to the aggrieved chicken rice stall boss, the customer allegedly raised his voice and demanded for the offending staff to be sacked.

Daniel Tan, owner of Halal chicken rice chain OK Chicken Rice with several outlets across Singapore, shared about the heated exchange with a customer in Yishun which took place on Friday (Jan 20).

Tan, 43, wrote in the post: “Sorry guys, we make mistakes from time to time and we know how important chilli is to a chicken rice customer.

“Please however don’t raise your voice, make unreasonable demands, let us make it up to you properly and don’t shout at us please.”

Based on the screenshot of his response to the customer, Tan, who was not at the outlet at the time, apologised and offered several options to compensate the customer for the oversight.

Tan added that he could not, however, deliver the packets of chilli sauce as the business does not employ delivery personnel.

In the reply, Tan also told the customer off, stating: “It’s not reasonable for you to demand that we sack the employee, say we are cheating, say you cannot allow any mistakes… our staff are human and from time to time make mistakes.”

Speaking to AsiaOne, Tan shared that the order was made over a delivery platform at the OK Chicken Rice outlet located at Blk 513 Yishun St 51.

According to Tan, the customer was frustrated after trying to contact the delivery platform but managed to get a hold of Tan’s mobile number from the internet.

“I picked up the [customer’s] call roughly around 7pm to 8pm on Chinese New Year Eve,” shared Tan, who was driving to dinner with his family.

Upon learning about the situation, Tan shared that he offered several options of compensation — including a complimentary meal on the next visit, or 10 free sticks of satay on top of the extra chilli for triggering another delivery order — all of which were rejected.

“He rejected, started shouting at us, accusing us of cheating,” said Tan of the multiple calls from the customer he received that night.

“Finally I asked ‘what do you want me to do as I don’t have delivery staff’. He said either deliver it to him now as it’s his right to have chilli or sack the staff,” said Tan, who eventually stopped responding as the calls continued through the night and till the next day.

“The last call was really heated, it was loud, but no vulgarities were used,” he shared.

The Facebook post also prompted a discussion in the comments section on whether the owner should have posted about the issue, and if rude behaviour from customers should be tolerated.

A majority of commuters appeared to be sympathetic to Tan’s situation, with many expressing how the customer is not always right.

Wrote one: “Some customers are just too entitled. It’s chilli sauce, for goodness sake. You want someone to lose their job over that?! Watch out for karma!”

See also  Having the courage to help, and to ask for help when needed

Another urged more compassion for staff in the food and beverage (F&B) business. 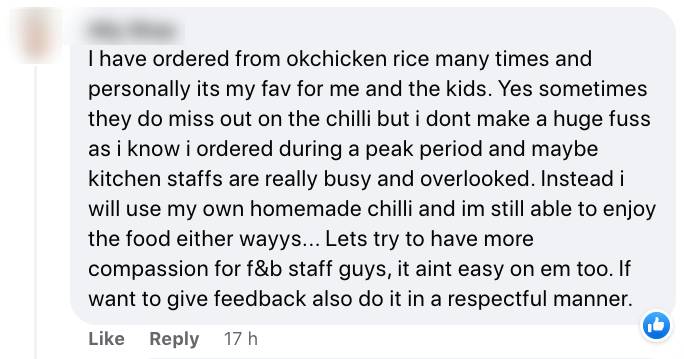 “It ain’t easy on them too. If want to give feedback also do it in a respectful manner,” shared the commenter.

But it may not be an isolated case, however, as at least one customer shared how her three previous orders too, were missing chilli sauce. 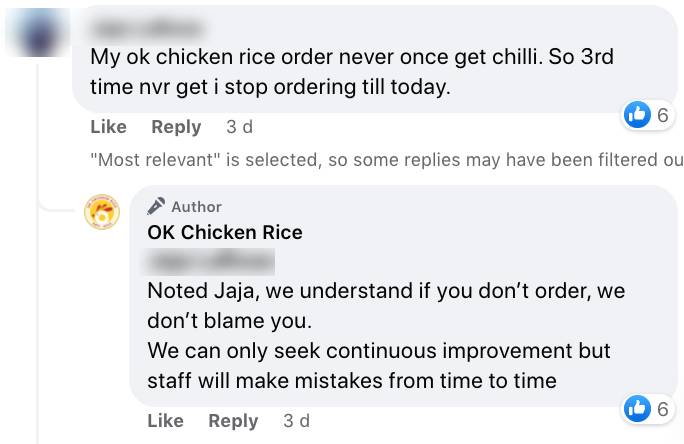 Some argued that Tan should have shown restraint in “shaming the customer”, or diverted their resources into dealing with the issue instead of posting about it online. 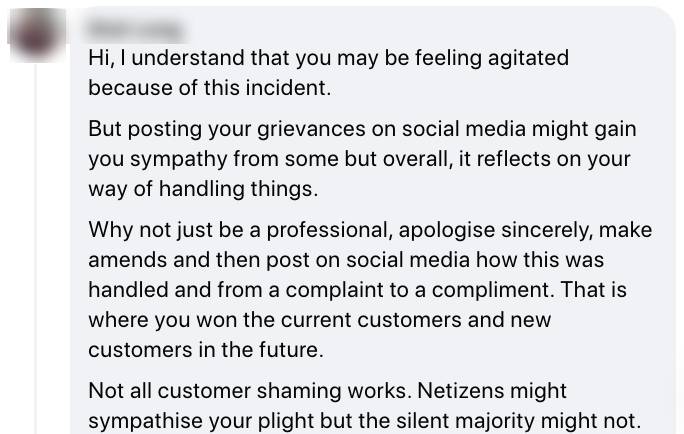 Tan explained that he had posted his reply on Facebook, “as I was worried about him accusing us of things we didn’t do”.

“The purpose of the post wasn’t to shame but to share that while we are really understanding of the frustration of a missing chilli sauce, our staff also didn’t do it deliberately,” he added.

“Allow us to make it up to you, allow us to ask you for details so that we can identify the right person or team to help, we don’t doubt customers who contact us at all.”

AsiaOne has reached out to the customer for more information.

Tan added that said customer had engaged in arguments with other users in the comments section as well, but his comments were later deleted.

Tan, who also operates Humfull Prawn Laksa along with other non-food related businesses, admitted that he is particularly protective of his staff as OK Chicken Rice is run much like a social enterprise, with a significant portion of staff either ex-offenders or those undergoing rehabilitation.

Addressed Tan: “We value people who are sincere at working, as long as they want to work, we will be patient.”

“99 per cent of our staff have never worked in F&B,” Tan shared, adding that the training “explains why our food is unusually consistent… [but] also explains why sometimes they are not as sharp or fast as the usual hawker aunty”.

Tan himself has been featured in the media several times on other issues, most notably for offering free chicken rice meals — to healthcare workers as well as to the community.