Driver nearly hits 'entitled' jaywalker at Shenton Way, accuses him of 'forcing' his way through


As a driver are you obliged to give way to jaywalkers?

This was what a dispute between a driver and a pedestrian, who looks like he was jaywalking along Telok Ayer Road, was about.

In a video taken on Tuesday (Jan 10) morning posted on SG Road Vigilante’s YouTube page, a driver was seen turning right from the main road into Telok Ayer Road.

All was well at this point until a man suddenly appeared and started crossing the road right in front of that car, indifferent to that oncoming vehicle.

The miffed pedestrian then blocked the car from going further and had a brief terse exchange with the driver.

Upon hearing the pedestrian claim that the driver should give way to him, the driver then raised his voice even further.

“Are you serious? Cars are going and there’s no traffic light. I have to give way to you and you’re forcing your way to cross the road!”

“[But] you’re turning…,” replied the pedestrian.

“You’re mad! You’re so entitled to cross the road like that! The entitlement is crazy you know!” said the driver as he continued his journey.

‘No one needs to be too upset’

In the comments thread, some netizens who agreed with the driver pointed out that it is the pedestrian’s responsibility to ensure his own safety, which in this case is to wait for the traffic to clear. 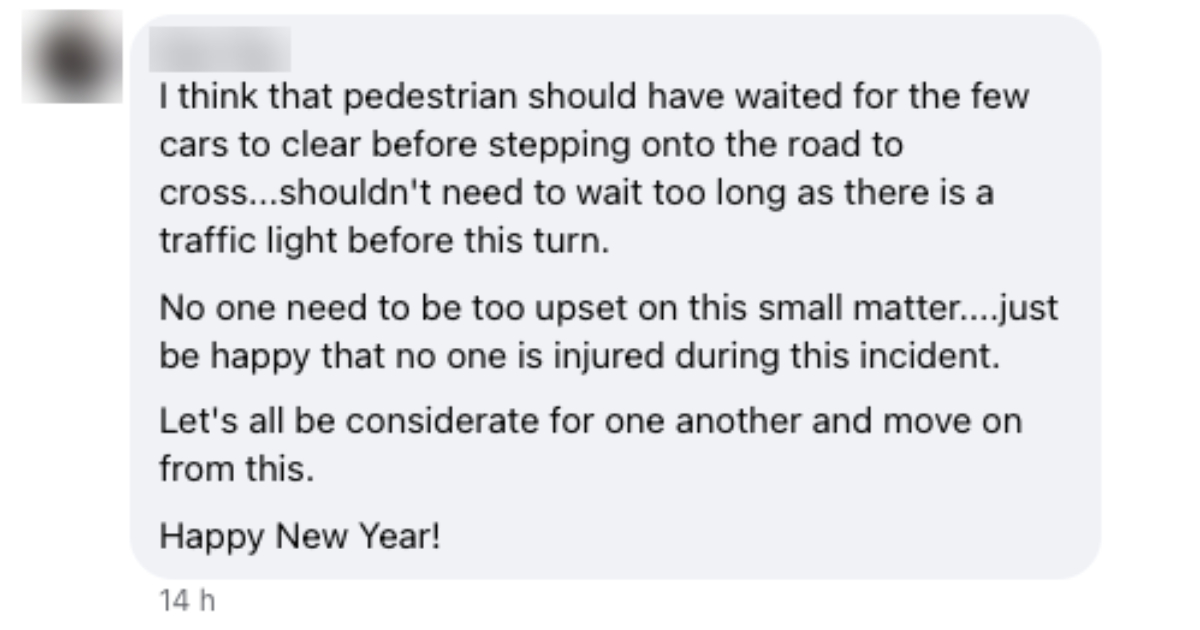 On the other hand, some netizens argued that that the driver should have given way.

After all, the man was already halfway across the road — all the more reason for the driver to give way.

Who has right of way?

According to the Highway Code, drivers must not only give way to vehicles but also pedestrians who are going straight when their car is turning left or right.

Likewise, it is an offence for pedestrians to fail to cross at a pedestrian crossing under the Road Traffic Act.

“The composition sum for this offence was raised from $20 to $50 on April 1, 2019,” said Sun Xueling, then Senior Parliamentary Secretary, Ministry of Home Affairs in February 2020.

ALSO READ: Passenger of passing car yells at man walking along PIE, gets called out for being rude