The frontman and guitarist for the American rock band Eagles of Death Metal have told a Paris court how they watched from the stage in confusion and horror as terrorists opened fire on the crowd at their sold-out concert at the Bataclan in 2015, leaving 90 people dead.

Jesse Hughes, the band’s singer, and Eden Galindo, a guitarist, both said the attack had changed their lives “forever”.

They travelled to Paris to give evidence to France’s biggest-ever criminal trial over the attacks claimed by Islamic State on 13 November 2015, which killed 130 people and injured more than 400, in synchronised suicide bombings and mass shootings across the French capital, from the national stadium to bars and restaurants and the Bataclan rock gig.

Hughes, 49, said the gig should have been the best of their tour and he had been “really excited” to play in Paris. He said he recognised the sound of gunfire instantly when three gunmen with suicide vests burst in mid-show and opened fire. “Being from a desert community in California, I know the sound of gun shots,” he said. While other band members hesitated and wondered what was going on, Hughes said he “knew death was upon us”. He said the band “ran for their lives”, describing how “nearly 90 of my friends [the fans] were murdered in front of us”.

The band escaped through a side door after Hughes had found his girlfriend in the concert hall. Arthur Dénouveaux, a rock fan who is now the president of the survivors’ group, Life for Paris, was among fans who managed to escape at the same time. He led the band members running through Paris streets, handing them €50 and putting them in a taxi telling them to head to the nearest police station, where they found other fans covered in blood. During the wait there, they learned that Nick Alexander, who had been working on the band’s merchandise at the gig, had been killed.

Hughes said that six years on, he still got nervous looking into crowds and had been anxious about giving evidence, with emotions rising up that he thought he had got over.

Galindo, 52, said it had been a great show, with everyone dancing, and that he had not understood the sound of gunshots at first, thinking it was the sound system. He said there were so many people in front of the stage that they could not move and he recalled the fans’ faces looking up at the band and the stage in confusion as the terrorists opened fire.

“We were thinking that it was going to stop but it just kept coming,” Galindo told the court. “After a while they reloaded and a technician told us: ‘Next time they stop, we run’.” He said that when he had got home to the US, he felt “broken” and found it hard to talk about “normal things”.

He eventually left the band. “I’ll never be the same after that night,” he said, adding that he thought of the victims’ families every day.

Hughes, arriving at the courthouse earlier on Tuesday, had been asked by the media how he felt to be in court facing Salah Abdeslam, believed to be the last survivor from the cell of 10 men who struck across Paris that night, as well as several others accused of preparing or helping the attacks.

Hughes told reporters: “I’m a Christian and everyone can be lost and everyone needs to find the way and most of the gentlemen in there do, so I forgive them and I hope that they find the peace of God themselves.” 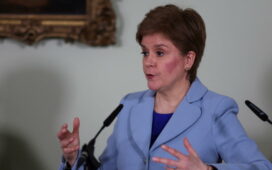 NATO set to increase its high-readiness forces to over 300,000 in massive military buildup

Russia-Ukraine war: what we know on day 123 of the invasion

Russia-Ukraine war: what we know on day 121 of the invasion