Even from the corridor, the stench of rotting flesh was discernible.

The decomposed body of a 54-year-old man was found on Tuesday (June 21) at a fifth floor unit at Block 85 Commonwealth Close, Shin Min Daily News reported.

When reporters from Chinese evening daily arrived at the scene, police had already cordoned off the area, and even though they could not get close to the flat, a foul smell permeated the air.

According to the paper, the unit is occupied by the deceased and his elderly mother, who’s in her 80s.

When interviewed, one neighbour who’d moved into the block more than a decade ago told reporters that she had not seen the male occupant for about a week.

Describing him as thin and frail-looking, the 68-year-old cleaner said she believed the man was not working, and she would often see him at the corridor in the morning hanging the laundry or watering their plants.

The neighbour, who did not wish to be named, also shared that her husband was the one who eventually called the police, after a foul smell detected since the start of the week became intolerable. Her husband was also worried that something untoward might have happened, she revealed.

Other neighbours shared with Shin Min Daily News that both mother and son generally kept to themselves and did not interact with others.

One neighbour surnamed Mei said that the elderly woman would retreat into her flat whenever she saw other people. Their main door was also usually closed.

Police confirmed that a case of unnatural death was reported at 12.38pm on Tuesday. Upon arrival at the unit, a man was found lying motionless on the ground and was pronounced dead at the scene by a paramedic.

According to the anonymous neighbour, police had knocked on the door for over an hour before a locksmith was eventually called in.

“When the policemen entered the home, I heard the woman crying loudly, I assume it’s because she was unwilling to part with her son” shared the neighbour.

“I felt my heart ache as well,” said the woman of a situation described as “the white-haired sending off the black-haired”. “How can anyone accept it?”

The neighbour added that elderly female resident is believed to have two other children whom they rarely saw. 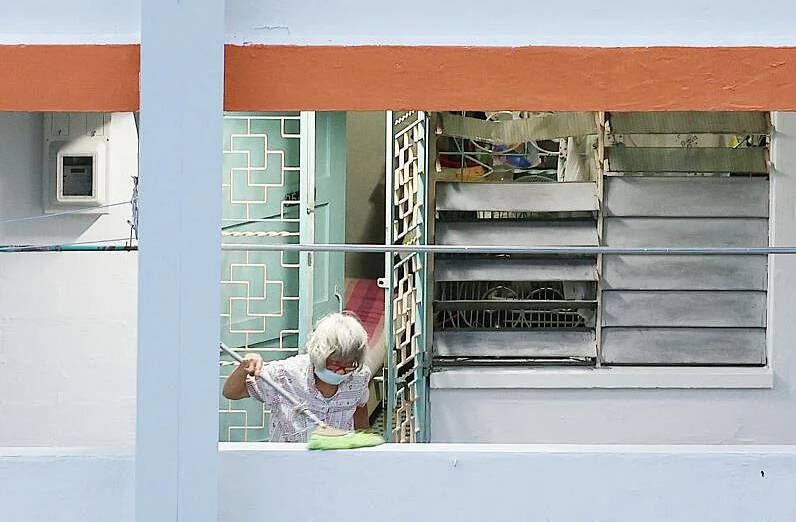 Shin Min Daily News reported that after the body was moved, the elderly woman was seen sweeping the living room area, which had been lined with newspapers. A middle-aged woman was also seen helping her to clean the flat.

“There are many factors that will affect the process, such as humidity or temperature. The smell [which emits from a decomposing body] can also happen anytime after death,” said Ang, who advised that bodies be embalmed as soon as death takes place.