We have been here before. Nine months ago, another international tour was cut short by some positive Covid tests – in the England one-day camp, in South Africa. The positives turned out to be false ones, and the tour was soon forgotten – but it’s highly relevant now, as it leaves England without much of a leg to stand on if they’re inclined to blame India.

Whatever the official result, this is a lose-lose situation. England lose the chance to draw the series. India lose the chance to win it in style and make history – they are only the second Indian squad ever to come to England and win two Tests, and none of their predecessors, going right back to 1952, has ever won three. The crowd lose a grand day out. Lancashire CCC lose a shedload of income. Cricket loses face. And more importantly, it loses goodwill.

Mike Atherton is talking on Sky Sports News. He’s pointing out that the elephant in the room here is the IPL, which is due to resume on Sunday week – only four days after what should have been the last day of this Test. And he reckons that decision of Chris Broad’s that I mentioned just now will be subject to a lot of negotiation. He’s not in any doubt about which way that negotiation will go. “I don’t think forfeiture will be the end result, for sure.”

And we still don’t know the final score in the series. It’s either 2-2, if this is a forfeit by India as the ECB originally said, or 2-1, if it’s “match abandoned”, as the ECB implied by withdrawing the word “forfeit” almost as soon as they’d uttered it. The latest suggestion is that that decision goes to the ICC match referee – Chris Broad, father of Stuart.

Thanks Rob and morning everyone. What a sad morning it is: five days’ cricket swept away by one, possibly rather hasty decision. The game is off, but the blame game has only just begun.

That’s quite enough from me. Tim de Lisle will keep you updated for the next few hours, and I’ll be back

during the afternoon session
later. Bye!

If the Covid concerns were so great, why wasn’t the fourth Test abandoned when most of the backroom staff tested positive?

The thoughts of Nasser Hussain on Sky

“It’s an evolving situation; it’s a mess. There’s still a bit of debate about the actual result – that hasn’t been clarified. The ECB will work that out with the BCCI and the ICC in time. There’s been no forfeiture.

“The ECB have said there will be a refund on ticket sales, but you can imagine how many people have waited to come here and watch this Test match – and it was set up beautifully. It’s a real shame the series has to end on such a low note.”

Here’s a quick report on the breaking news that the Test has been called off.

The fifth Test at Old Trafford has been called off because of the Covid outbreak in the Indian camp. At first, the ECB’s official statement said India had forfeited the game, which would mean a 2-2 series draw, but the word ‘forfeit’ has since been removed. We all feared the Manchester weather would disrupt the game; turns out the forecast is for a shitstorm to start blowing over Old Trafford any minute now.

We’ll keep you updated as the story develops. For now, all we know is that the game is off, and that the series scoreline is either England 2-2 India or England 1-2 India. 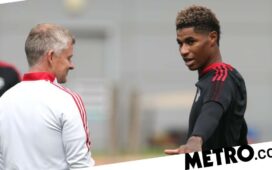