Excited for the release of She Said? The 10 best movies about journalists


Journalists: there’s something very appealing about this unique breed to filmmakers. Like a more public private eye, these moral crusaders are the perfect vessel to expose wrongdoing.

Hitting cinemas soon is Maria Schrader’s She Said, the story of how The New York Times’ Megan Twohey and Jodi Kantor (played by Carey Mulligan and Zoe Kazan, respectively) helped bring down Hollywood mogul Harvey Weinstein for multiple sexual assaults and break the code of silence that had been surrounding his actions.

Apart from the rarity of seeing two female journalists take centre stage, it’s yet another fine example of this intriguing subgenre.

So hold the front page: here’s our ranking of the 10 best films about reporters ever made. 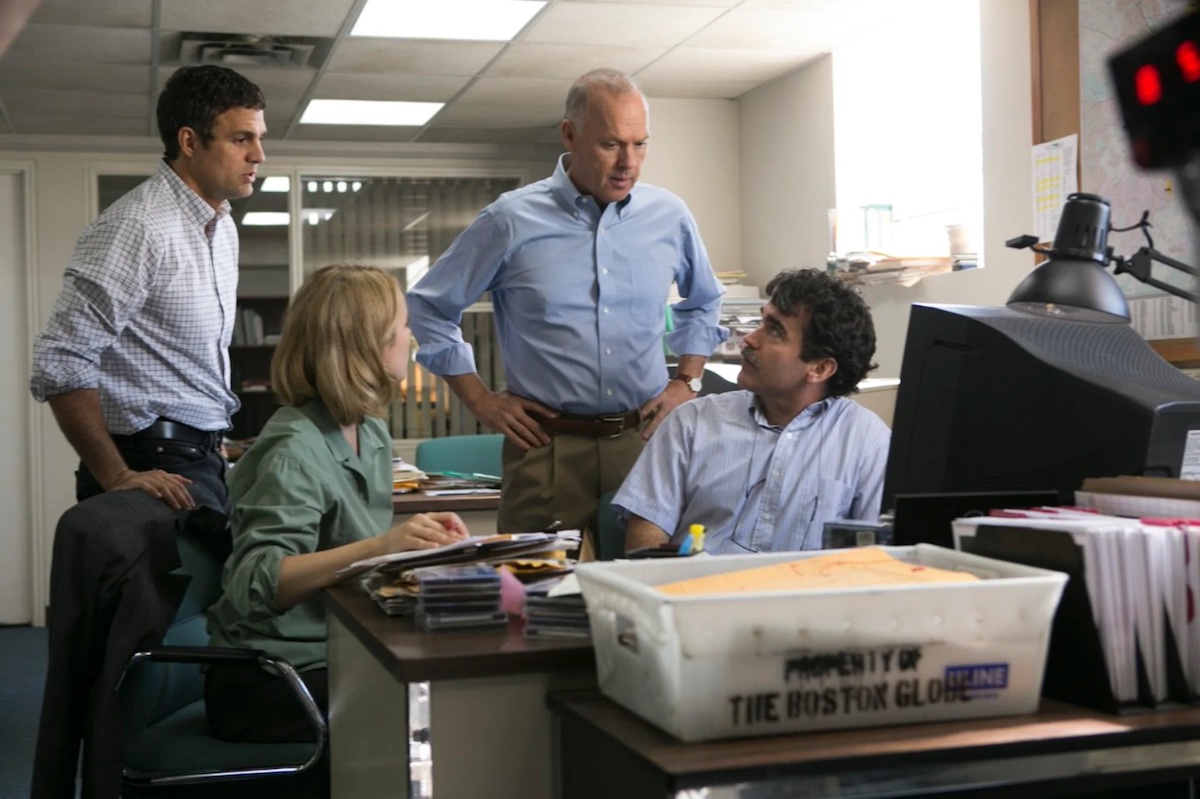 “I just thought this was the right time to talk about freedom of the press, to talk about the right of free speech, [and] celebrate the hard work of journalism and news reporting,” said director Steven Spielberg when he made The Post — a perfect film for a double bill with All the President’s Men.

The story lays the groundwork for the Watergate scandal, in which the administration of US president Richard Nixon attempted to cover up its break-in at the Democratic National Committee headquarters in Washington as part of a political spying and sabotage campaign.

The film is less about dogged detective work and more about fighting for the right to publish — in this case, the potentially damaging Pentagon Papers, classified documents concerning America’s deception over its involvement in Vietnam.

The need to scoop your rivals has never felt so urgent.

It’s not always the written word that compels.

Salvador — still one of Oliver Stone’s best movies — tells of photojournalist Richard Boyle and his coverage of the civil war in El Salvador.

James Woods has never been better than he is here as Boyle, a man devoted to his work but hampered by substance abuse problems.

See also  'Tom Cruise knows exactly what goes on in Scientology': Leah Remini urges fans not to be fooled by 'movie star charm'

Stone, who co-wrote the script with Boyle, revels in the sleaziness of his protagonist, but also emphasises his principles — as he discovers just how the US government is supporting El Salvador’s right-wing military dictatorship.

The world of TV news was beautifully realised by James L. Brooks in this appealing romcom that took audiences behind the scenes of the Washington bureau of a national news network.

Albert Brooks, Holly Hunter and William Hurt take the leads, with the latter excelling as the charming, good-looking, but vapid anchorman who has come to represent everything Brooks’ character hates about the media.

Critic Roger Ebert called it as “knowledgeable about the TV newsgathering process as any movie ever made” — a comment that could still stand today.

Most films about journalism are heroic tales of reporters unearthing institutional corruption; Billy Ray’s true-life drama is quite the opposite.

Hayden Christensen — who was then in the midst of playing Darth Vader in the Star Wars prequels — excels as Stephen Glass, a writer for political commentary magazine The New Republic, who is gradually revealed to have fabricated or falsified a huge number of his stories.

This, the audience comes to realise, is just why he managed to get away with such grand deceptions in the first place. 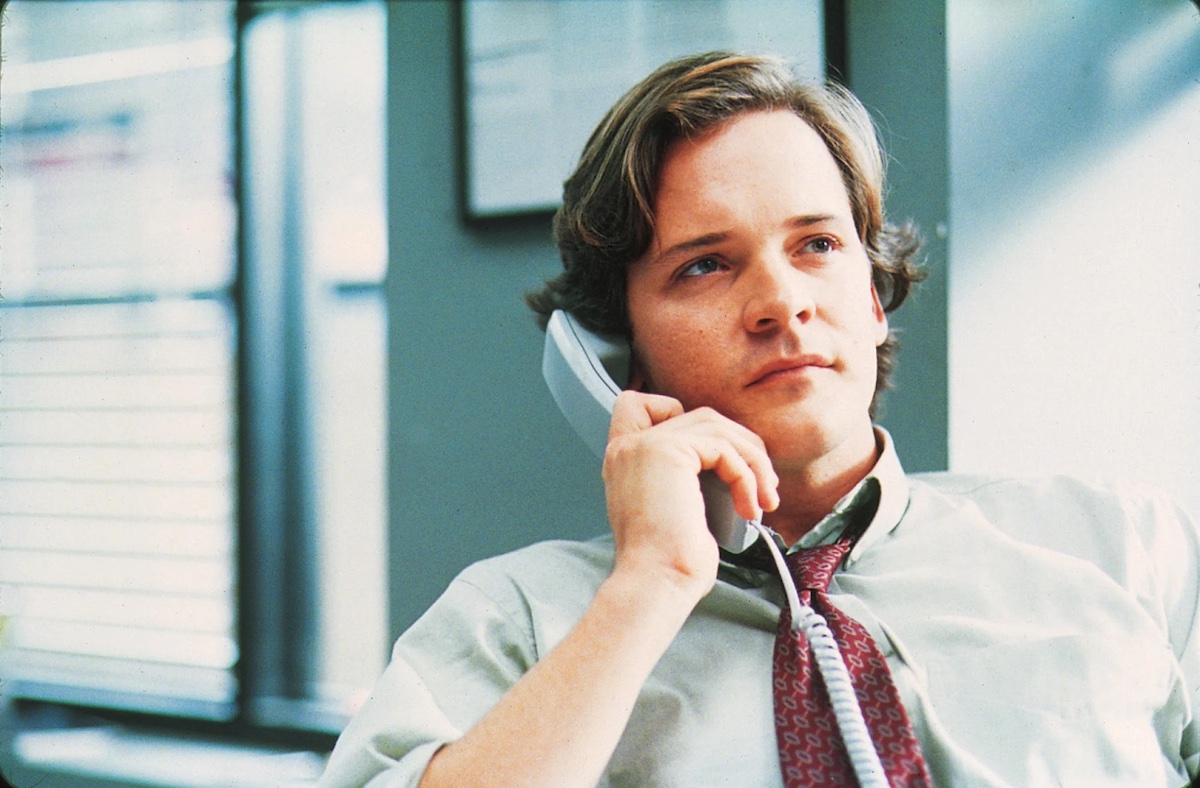 Howard Hawks’ screwball comedy, based on the influential Broadway play The Front Page, has come to embody the screen image of the old-school newspaper reporter: fast-talking and cynical as hell.

Set to marry — much to the chagrin of her editor/ex-lover (Cary Grant) — she ends up covering a death row case.

If any film shows how reporters will follow their story to the detriment of everything else including their personal life, it’s this.

The second masterful film about journalism to be made in 1976, Sidney Lumet’s take on Paddy Chayefsky’s script dug deep into TV news ratings wars — and the mental toll it takes on those involved.

Prefiguring the avalanche of angry opinion formers that would swamp US prime time in the 1980s, Peter Finch’s Howard Beale, “the mad prophet of the airwaves”, remains an iconic creation.

Critically, he arrived just two years after the first ever on-screen suicide, as Florida reporter Christine Chubbuck took her own life in 1974 — an event dramatised in 2016’s Christine, with Rebecca Hall. 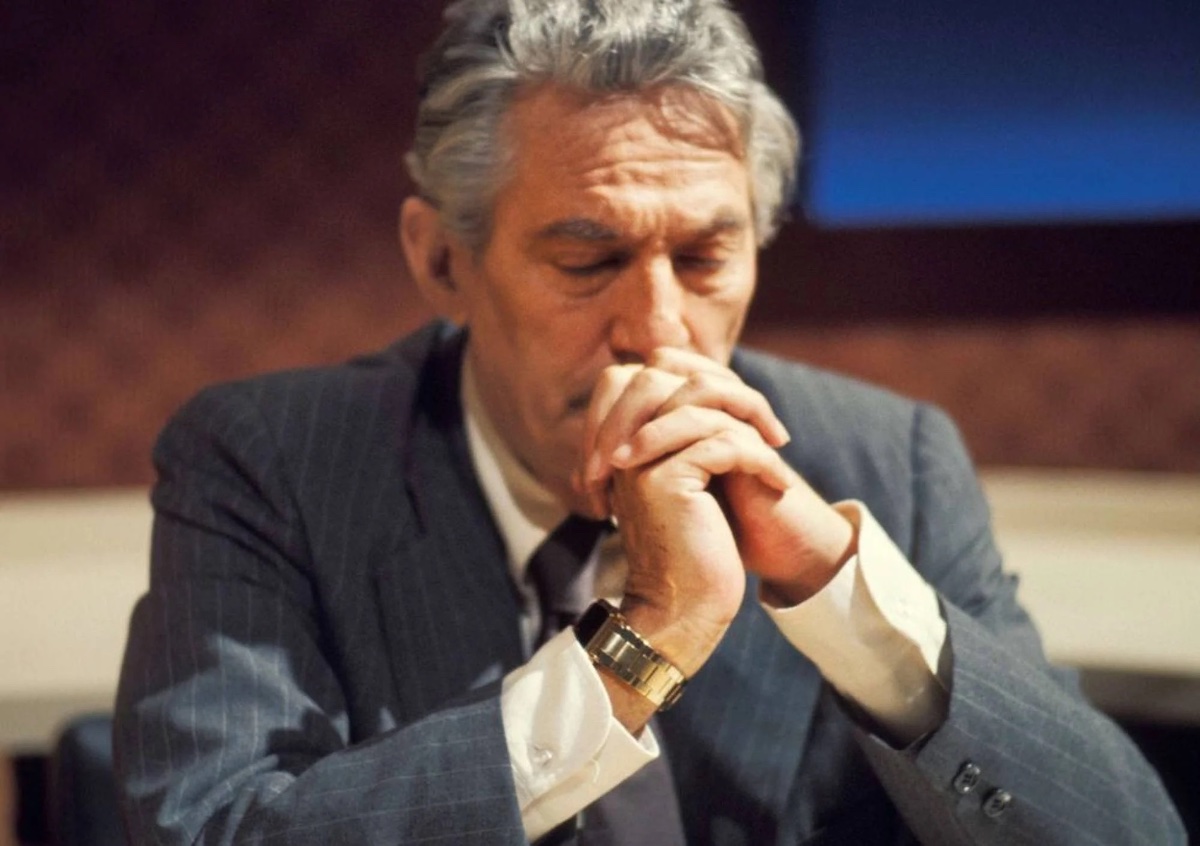 Gregory Mcdonald’s series of books about an investigative reporter for the Los Angeles Times provided former Saturday Night Live comedian Chevy Chase with one of his most endearing roles.

Directed by Michael Ritchie, Chase’s Irwin M. Fletcher truly captures the spirit of poking your nose in where it’s really not wanted.

While Fletch’s disguises and false names lent a lightheartedness to the film, the noirish plot about police corruption and narcotics trafficking lends just the right amount of intrigue.

Serenaded by Harold Faltermeyer’s score, it’s also a fine look at how the best hacks don’t take no for an answer, even from their bosses.

His 1974 comedy The Front Page cast Walter Matthau and Jack Lemmon in a remake of the play that had already inspired His Girl Friday.

But 15 years before that, he made this stone-cold classic, starring Kirk Douglas as Chuck Tatum, an on-the-slide reporter who gets a job at the Albuquerque Sun-Bulletin.

When he discovers a man trapped in a cave, he cynically exploits the situation to reboot his career. 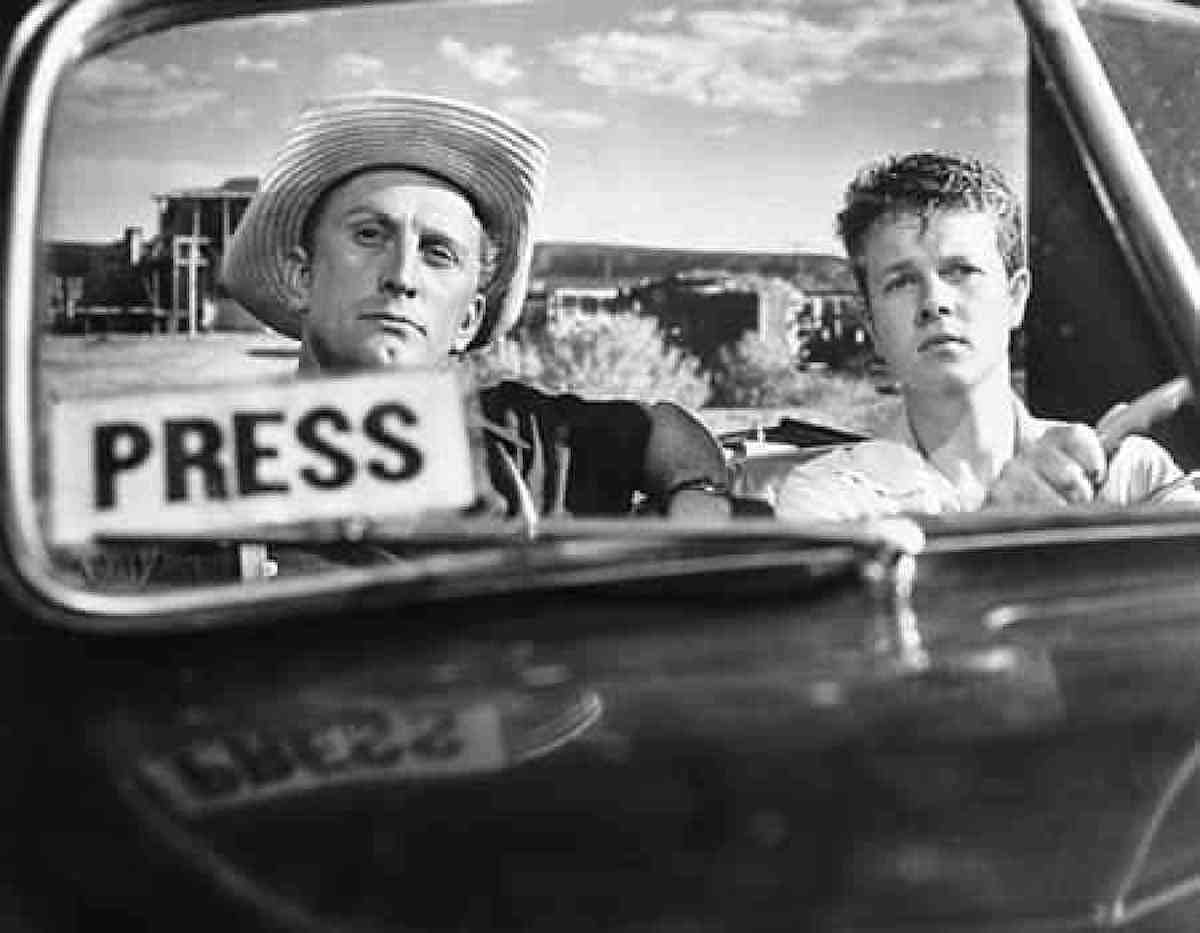 The film flopped on release, Wilder believing audiences “did not believe me that when somebody’s a newspaperman, they are capable of that behaviour”.

How wrong they were.

A worthy Oscar best picture winner, Spotlight shows how the Boston Globe’s investigative unit, Spotlight, picked at a scab on the Catholic Church and uncovered a festering wound.

Director Tom McCarthy, who had already played a reporter in TV sensation The Wire, brought huge credibility to this tale of paedophile priests and how their crimes were covered up by church officials.

With a cast led by Mark Ruffalo as journalist Michael Rezendes, this film really impresses in how McCarthy conveys the old-school legwork of journalism, combing through endless filing cabinets in search of that one crucial clue to crack the story.

The grandaddy of all journalism films, Alan J. Pakula’s masterpiece tells of how Washington Post reporters Bob Woodward and Carl Bernstein uncovered the Watergate scandal, which ultimately led to the resignation as US president of Richard Nixon.

Casting Robert Redford and Dustin Hoffman, both in the prime of their careers, was a coup, but this is not a film that skates by on the performances of its A-list stars.

The Oscar-winning script by William Goldman offers a dense, methodical account of how the story broke, right down to meeting the vital informant known only as ‘Deep Throat’ in an underground car park. 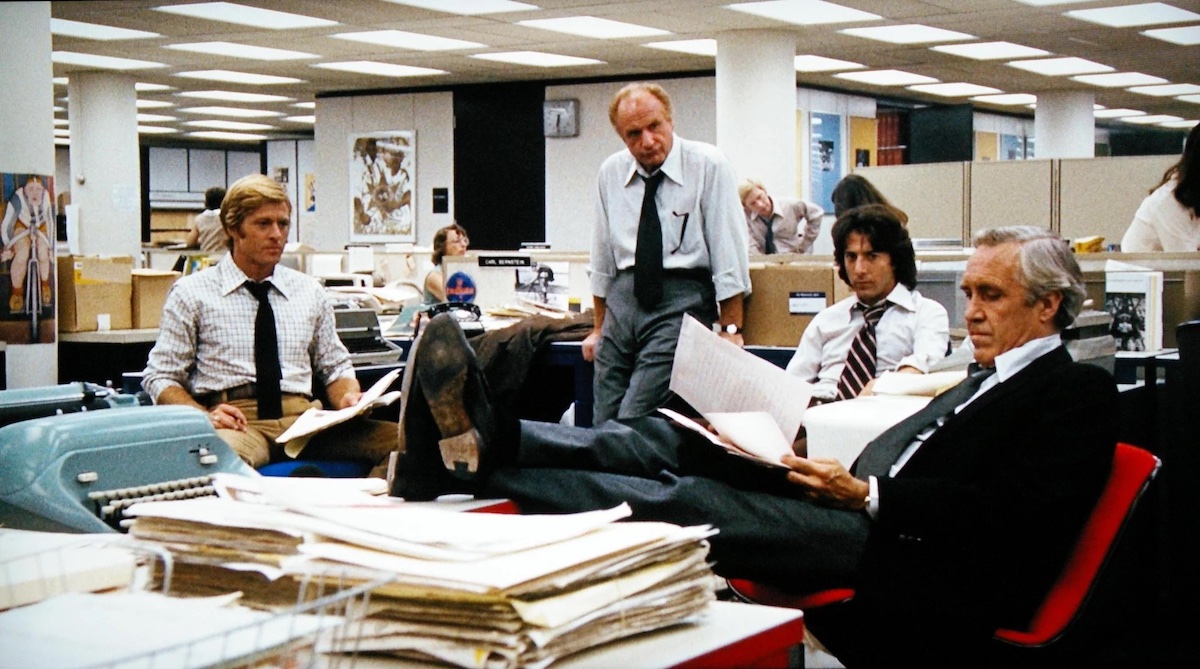