SINGAPORE/SHANGHAI — Chu Wenhong would fly back to Shanghai and visit her parents at least once a year after she moved to Singapore in 1994.

But she hasn’t been able to do so in the past three years due to China’s signature zero-Covid policy, which involved mass PCR testing, city-wide lockdowns and quarantining all inbound arrivals, including overseas Chinese like Chu.

The last time the 54-year-old lab worker visited her hometown was in November 2019, one month before the world’s first Covid outbreak was detected in the central Chinese city of Wuhan.

But Chu snatched a ticket last month to fly back after China announced it would end quarantine on all inbound travellers from Jan 8, marking the final unravelling of the country’s zero-Covid policy.

“Finally, I can go back. I have been waiting for this day for a long time,” Chu said from her Singapore home after packing her suitcase on Wednesday (Jan 11), the night before her flight.

The removal of inbound quarantine prompted a surge in demand for plane tickets in countries like Singapore which have large communities of overseas Chinese.

Singapore resident Chu paid $2,264 for a one way ticket to Shanghai, while a return journey used to cost her around $600 before the pandemic.

However, in the absence of a long quarantine, it was still a price she was willing to pay in order to spend with her family over the Lunar New Year holiday that starts on Jan 21.

The holiday is especially important to Chinese families as it is often the only time of the year when relatives, distant and close, reunite and spend time with each other.

China had imposed inbound quarantines on all arrivals from outside its borders since March 2020. The measure discouraged business travel into China and kept families separated for years, as it involved paying to stay inside a hotel room for two to three weeks.

And even for those willing to endure the hotel quarantine, flights were often unavailable or overpriced as Beijing drastically cut the number of inbound flights in a bid to prevent imported Covid-19 cases.

“China remained closed off after Singapore reopened, so to go back, people needed to do PCR tests, undergo quarantine, and prices of flight tickets skyrocketed. There were too many obstacles,” Chu said.

China’s easing over the past month of one of the world’s tightest Covid regimes followed historic protests against a policy that included frequent testing, kerbs on movement and mass lockdowns that heavily damaged the world’s second-biggest economy.

Chu said she had missed her parents, her 83-year-old father and 78-year-old mother, and worried about their failing health. Her biggest wish was to spend as much time with them as possible when she goes back this time.

“I haven’t seen them for three years, and they both got Covid, and are quite old. I feel quite lucky actually, as it wasn’t too serious for them, but their health is not very good. So I want to go home and see them as soon as possible,” she said.

Chu said she felt exhilarated to be home soon after landing at the Shanghai Pudong Airport on Thursday.

“I’m so happy because I’ve been looking forward to it for three whole years. I want to see my mother the most and take a good look at her,” she said.

See also  China coal: Australia ban continues to weigh on supply, imports down 40 per cent even as Russia moves to fill gap

Her mother, Cao Yafang, was equally relieved after reuniting with her daughter.

“She is pretty much the same as in the videochat. Now when I see her in person, my heart is more at ease.”

ALSO READ: Chinese fret over elderly as WHO warns of holiday Covid-19 surge 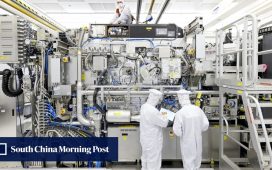