Pro-democracy protesters in Hong Kong who were charged with rioting appeared in court Wednesday, setting the stage for further unrest in a weeks-long crisis that has rocked the city.

The announcement that 44 people had been charged with rioting — an offense that carries a jail term of up to 10 years — immediately triggered another round of clashes late on Tuesday night between police and protesters.

Supporters of those charged continued to voice their outrage as they stood outside court on Wednesday morning, braving heavy winds and rain, before the proceedings started.

“Release the righteous… no rioters, only tyranny… reclaim Hong Kong, the revolution of our times,” they chanted.

Four of those charged appeared before a judge on Wednesday morning, then proceedings were adjourned, according to an AFP reporter at the court.

Hong Kong has endured more than seven weeks of unrest that began with a government bid to introduce a law that would have allowed extraditions to mainland China.

The protests have since evolved into a movement for deeper democratic reforms and an end to eroding freedoms, in the most significant challenge to Beijing’s rule since the city’s handover from Britain in 1997.

In the latest confrontation, police used pepper spray and batons against hundreds of protesters who had gathered outside a police station in solidarity with the 44 who had just been charged.

Footage broadcast live on television showed an officer aiming a shotgun at protesters who were throwing objects at him. It was unclear whether the shotgun was loaded with live ammunition or rubber bullets, which have been used repeatedly to disperse past protests.

READ  Coronavirus outbreak: Hong Kong’s medical workers on strike could have been left with a bitter pill to swallow

Footage circulating online also appears to show the officer being beaten to the ground by a crowd of demonstrators before brandishing the weapon, at which point the protesters move back.

The past two weekends have seen a surge in the level of violence used by both protesters and police, not to mention pro-government thugs who attacked protesters at a New Territories MTR station, and the unidentified people behind a fireworks attack on protesters at a different police station last night.

The move to charge the 44 protesters with rioting came a day after Beijing publicly threw its weight behind Hong Kong’s unelected leader Carrie Lam and the police, saying violent protesters must be swiftly punished.

Lam has shown no sign of backing down beyond agreeing to suspend the extradition bill, and has made few public appearances.

Protesters, meanwhile, have vowed to keep their campaign going until their core demands are met. 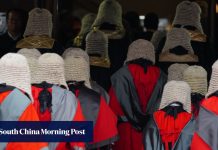 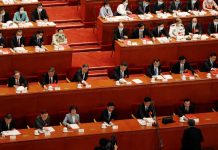 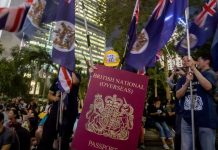 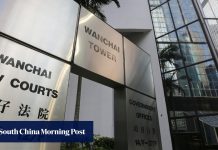 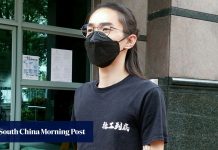 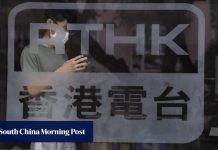 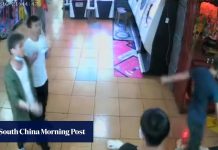 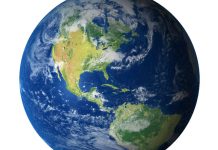 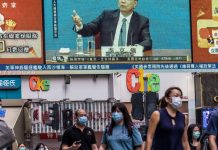