France cracks down on Guadeloupe protests over Covid measures


French authorities have dispatched police reinforcements to the Caribbean island of Guadeloupe after a week of violent protests over coronavirus restrictions.

Islanders are angry after Paris announced that health workers across all French territories must have Covid vaccinations. This sparked demonstrations that degenerated into the torching and looting of shops and pharmacies and clashes with police.

There were reports that rioters had broken into an arms depot in the island’s coastal capital, Pointe-à-Pitre, and stolen rifles. “We just don’t know how far this will still go,” the city’s mayor, Harry Durimel, told FranceInfo radio.

Island authorities have imposed a dusk-to-dawn curfew until Tuesday morning. On Monday police said they had arrested 38 people caught looting and smashing shops, and had begun dismantling road barricades set up by protesters.

Col Jean Pierre, of the gendarmerie at Pointe-à-Pitre, said protesters had fired on security forces and firefighters, and blamed the worst incidences on “organised gangs”.

In Paris, the government spokesperson Gabriel Attal described the situation on the island as “intolerable and unacceptable”. He said there would be a tough response to the “small minority” involved in the violence and vandalism. “We cannot accept this happening on national territory,” Attal said.

Olivier Serva, the MP for Guadeloupe with Emmanuel Macron’s governing La République En Marche party, said he had warned that the situation on the island was “quasi-insurrectional”. He said opposition to the vaccine and Covid regulations was down to “weakening state authority” on the island and a symptom of the legacy of “colonial slavery”.

Maité Hubert M’Toumo, the secretary general of the island’s biggest union, the UGTG, called for more protests. He said they had been sparked by the vaccine order but were symptomatic of a greater malaise. “They express the depth of suffering, inequality, poverty and exclusion felt by the people, especially the young and the elderly,” he said.

On Saturday the island’s doctors’ union appeal for calm, saying the health system was “fragile” and condemning “those individuals who want to prevent patients from accessing care or caregivers accessing their place of work”.

The French prime minister, Jean Castex is due to meet MPs from Guadeloupe on Monday to discuss how to resolve the crisis.

There are fears the violence could spread. On the neighbouring island of Martinique, union leaders called a general strike on Monday.

In September France made it compulsory for all health workers, home carers, transport staff, medical students, firefighters, and all personnel linked to these services to have the Covid vaccine.

According to government figures, just under 90% of the adult population of France – including the overseas territories – has been fully vaccinated. However, only 40.3% of adults on Guadeloupe have had the vaccine. In Martinique the figure is 41%.

A passe sanitaire, or health pass, showing a person has been vaccinated or recently tested negative for Covid is necessary in restaurants, cinemas, theatres, museums and other public buildings in France. Free Covid tests ended in the middle of October, putting pressure on the French to have the vaccine.

Guadeloupe has reported a total of 54,854 Covid cases and 822 deaths attributed to the virus. 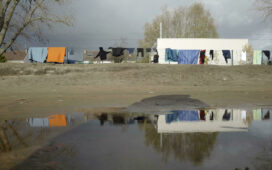