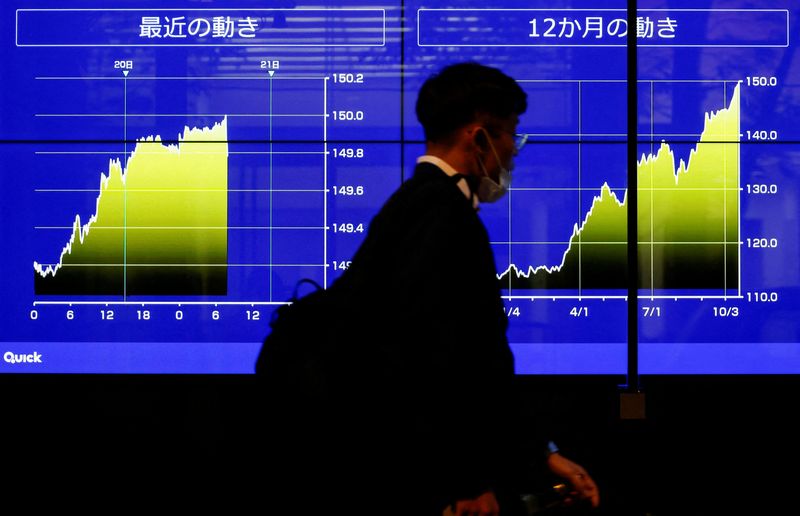 By Herbert Lash and Carolyn Cohn

NEW YORK/LONDON (Reuters) – Global equities edged up and a key part of the Treasury yield curve inverted further on Friday, a sign the U.S. economy will stall next year and that investors hope will lead the Federal Reserve to back off its aggressive hiking of interest rates.

Surprisingly strong retail sales data this week hammered home the idea that the Fed will tighten monetary policy further even though soft consumer and producer price pressures suggested inflation has peaked and would allow for lower rates.

Treasury yields rose for a second day following hawkish comments on Thursday by St. Louis Fed President James Bullard, who said rates needed to rise to at least a range between 5% and 5.25% to be “sufficiently restrictive” to curb inflation.

The remarks were a blow to investors who had wagered rates would peak at 5% or below. Futures now show the Fed funds rate at 5.05% by May, up from 3.83% now. But futures also show rates will slide to 4.66% in December 2023 on expectations the Fed will move to ease policy as the economy weakens.

Boston Fed President Susan Collins added to the Fed’s hardline stance, telling CNBC that with little evidence price pressures are waning policymakers may need to deliver another 75 basis-point rate hike to get inflation under control.

“Where we think the market is getting it wrong, is pricing in rate cuts next year,” said Dec Mullarkey, managing director of investment strategy and asset allocation at SLC Management.

“Powell often has made the point, ‘we’re concerned that if you let up too quickly, that you’ll have a second surge of inflation,’ and that’s not something they want to repeat,” Mullarkey said, referring to Fed Chairman Jerome Powell.

The market sees a recession next year as the yield spread between two- and 10-year Treasuries was -71 basis points, an inversion of the yield curve that has not reached such depths since at least 2000.

When yields are less on the 10-year note than the two-year, a security that reflects interest rate expectations, it suggests a slowdown or worse and that the Fed will cut rates to spur the economy.

The impact of rising rates was felt in housing, where U.S. existing home sales tumbled for a record ninth straight month in October as the 30-year fixed mortgage rate hit a 20-year high.

The MSCI world equities index rose 0.48% but was heading for a loss of about 0.5% on the week, coming off recent two-month highs. The pan-European index 1.16%, its best one-day performance in more than a week.

Inflows into global equity funds hit their highest level in 35 weeks in the week to Wednesday, according to a report from Bank of America (NYSE:) (BofA), as investor optimism brightened.

The euro fell 0.35% to $1.0324, having eased from a four-month peak of $1.0481 hit on Tuesday as some policymakers argued for caution on tightening. The yen weakened 0.15% versus the dollar at 140.41. Chinese blue chips dropped 0.45% amid reports that Beijing had asked banks to check liquidity in the bond market after soaring yields caused losses for some investors.

There were also concerns that a surge in COVID-19 cases in China would challenge plans to ease strict movement curbs that have throttled the economy.

Oil fell about 2% and logged its second weekly decline, pressured by concern about weakening demand in China and further increases to U.S. interest rates.