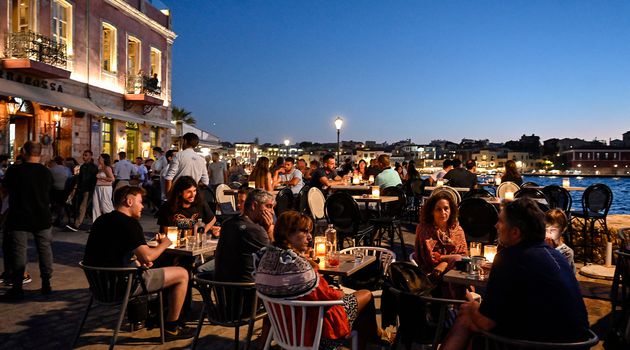 Each year, around the end of October, we reclaim the streets. This is not a political gesture. It does not require an organised march, or banners or cheer-leaders. Or police. We simply walk around the town – its beautiful arcaded streets and narrow lanes, from which we have been banished since early spring by the hordes of tourists who wander with aimless curiosity.

A recent study warned that Athens has also reached saturation point – in this case, due to the explosion of Airbnb availability which has increased by 500 per cent in the past seven years. The study referred to “tourist-carrying capacity”, which is defined as “the maximum number that may visit a tourism destination without causing negative effects on the natural, economic and socio-cultural environment”. In Athens, and in many other hotspots, that number has already been exceeded.

On the tiny Cycladic island of Santorini, wine-growers have for years complained that they are losing land to new hotels, thus endangering their unique product, its Assyrtiko wine which owes its dry quality to the island’s volcanic soil.

On nearby Ios, where Irish man Philip Corrigan operates a niche tourist business, competition from huge resorts has almost extinguished the distinctive wetlands and their biodiversity. In Corfu, two massive developments threaten to destroy unique ecosystems which are unfortunately not protected by law. Environmental damage cannot be reversed.

In Corfu alone, 1.7 million tourists arrived by air last year, to say nothing of the tens of thousands disgorged on day-release from the cruise ships. It is these latter, in fact, who follow their guide (she is the one with the numbered ping-pong bat) around the main attractions, probably wondering if this is Dubrovnik or Chania.

[ Diarmaid Ferriter: Greece burns while the tourists fiddle with their phones ]

We are repeatedly told that lack of an overall co-ordinated plan will eventually destroy the very product which constitutes Greece’s single most valuable industry. Greece, once the starting-point for democracy and philosophy, is now merely a destination.

The warnings are not being heeded, for the same reason that the natural beauties of the islands are being over-built: greed. Greek tourism is now the victim of its own success. As long ago as the 1960s, Lawrence Durrell and Gerald Durrell, who lived in Corfu in the 1930s, saw “get rich quick” as the driving force for tourism development.

We are told that 20 per cent of the national workforce are employed in tourism, but in hotspots like Corfu, Mykonos and Santorini, almost everyone, from grannies to small kids, are drafted into some aspect of tourism on which their livelihood, nowadays, depends.

Without tourism, which contributes in excess of 25 per cent of gross domestic product, Greece would be dead economically. With tourism, it is in danger of social and cultural death. How is the quality of life of the people who live permanently in Greece to be protected and sustained if uncontrolled expansion of tourist numbers and tourist behaviour is encouraged?

[ Greece Letter: Brendan Behan’s The Laughing Boy has become a mantra of the Greek Left ]

It has been argued that “strategic” developments in Ios, Corfu, Paros and Kea, funded by foreign investors, are the only way for tourism development to go. But, against this insistence on huge foreign investment, it has been argued by local folk that “hypertourism is a problematic choice and the construction of large-scale tourism is not a one-way solution”, especially for the islands.

For the brief months of winter, we enjoy the sheer pleasure of being able to stroll in the narrow streets without hindrance, without shoals of tourists who seem unable to understand “Excuse me” in any known language. But the season is stretching. Each year we surrender the streets a little earlier and reclaim them a little later.

For 400 years, Corfu was dominated by Venice, and today reflects its cultural and architectural legacy. But we are suffering from the same disease as Venice today. Donna Leon, both in her own words and in those of her fictional detective, Guido Brunetti, has been recording the erosion of the “real” Venice for decades: the replacement of traditional crafts and skills by cafes and foreign-made souvenirs. Most “authentic Murano” glass, one of Venice’s trademarks, is made today in the Czech Republic. Many of the “traditional Greek” goods are made in China or Taiwan. And why would a British tourist from a cruise ship want to buy bags of stuff in the Corfu branch of Marks and Spencer? Or a sweatshirt bearing the legend “Chicago Bulls”?

Corfu, like Venice, is becoming an inhospitable place for its own people to live. In the village where I live, the two year-round tavernas have closed up for the winter, because passing trade has become more lucrative, and therefore more important, than local custom. The village is in danger of becoming a showpiece rather than a living organism.

Soon, homogenisation will transform Corfu, Santorini, Mykonos, even Athens, into mere destinations, indistinguishable to all but discerning visitors – themselves a dying breed.