Harvey Elliott’s season has been hit hard by a serious injury sustained in a win over Leeds, but his attitude towards recovery has been complimented and in Virgil van Dijk he has the ideal sounding board 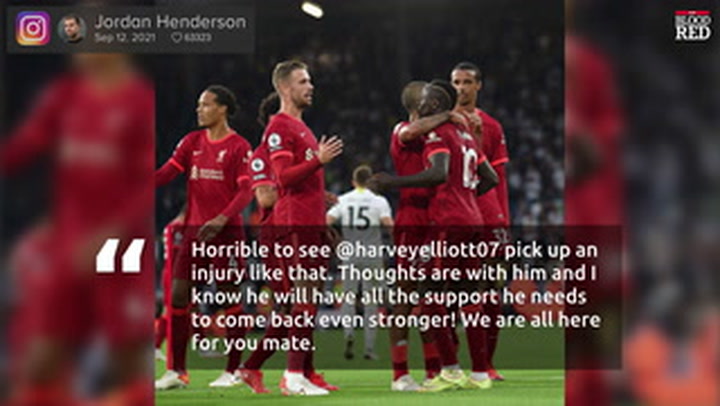 Harvey Elliott’s injury recovery is progressing nicely according to Liverpool teammate James Milner, who has praised his maturity.

The teenage sensation was thrown into the first team by Jurgen Klopp after an impressive loan spell away at Blackburn Rovers.

But a horrific injury in Liverpool’s fourth game of the season at Leeds put pay to Elliott’s ambitions.

The former Fulham man is in the midst of a lengthy rehab process, similar to the one recently undertaken by Virgil van Dijk.

Elliott’s “rare” injury, a fracture dislocation of his left ankle, is nothing like the ACL problem sustained by his Dutch colleague.

However their routes back are very much the same and the 18-year-old can take inspiration from his teammate.

Van Dijk spent almost the entirety of last season on the sidelines, returning in pre-season before playing every league game so far this term in red.

Hailed as the best centre-half in the world, the 30-year-old claimed a desire to prove he could return as a better player was a huge motivating factor.

Liverpool’s squad is not short of leaders, with Milner firmly among them.

He benefitted from older heads when he was a youngster bursting onto the scene at Leeds in the early 2000s. Now Elliott can do likewise at Anfield.

The teenager said after his injury: “I am now fully focused on my recovery and will give everything in my rehabilitation to be back out there as soon as I can.

“I know I have an incredible support network behind me at Liverpool and together we will get through this.”

The midfielder is almost ready to do away with crutches according to his teammate after successfully undergoing surgery in September.

“He’s been so positive from the start, to be honest,” Milner told the club’s website.

“I was talking about mental strength before, as soon as it happened, the things he was saying, he talks like he’s been through it all before and he’s a 30-odd-year-old player.

Players returning from injury often have to put themselves through their paces in ways they would rather not.

Work and exercises can be viewed as tedious, but Elliott’s desire to do what’s required has left a mark.

The teenager is continuing his rehab

“They see the stuff in the gym and the videos, but at home now and he’s on his crutches and he’s doing band work and just lifting his leg up to keep the strength in his muscles.

“It’s so boring and would be easy not to do, but that’s the hard work that gives you the basis to push on through. He’s doing really well and that’s great to see.”

Van Dijk’s return, in the eyes of many, has once again turned Liverpool into title contenders.

In his two full seasons at the club the Reds picked up 99 and 97 points. In the year without him they didn’t even muster 70 in an injury-hit campaign.

The Dutchman has opened up on his journey back, insisting the progress is not linear and there were certainly bumps along the way.

“Every time was a small step, but it was quite big for me mentally,” he said.

“It’s difficult, of course, at times. Especially when you have bad moments, but I’ve got quite a good mentality in that case.

“The only thing you just have to do is take every day as it is and keep working.”

He’s also claimed: “Especially in the beginning [of my rehabilitation], mentally it was tough. You are going from one day being fully fit to the next day you can’t walk, you’re full of medication, full of pain, you can’t sleep.”

Where will Liverpool finish in the league this season? Comment down below

There seems to have a shift in the German’s team selection this season.

Trent Alexander-Arnold has enjoyed a meteoric rise during Klopp’s reign, becoming one of the world’s leading right-backs.

He remained for a long time the only academy star in the club’s starting XI, but Curtis Jones has now joined him.

The midfielder is becoming increasingly influential, much like Elliott.

Klopp regretted that his teenage star was forced to face such an ordeal at his tender age, but left him in no doubt that his future was in red.

He said: “Do I want such a young boy early in his career to have this experience? No, but now it’s the case so we have to be there and we will be there.

“We’ll play football without him but we will wait for him as well because obviously he’s a top player.”

See also  Why Jude Bellingham is already on the radar of football's powerhouses
Share on FacebookShare on TwitterShare on LinkedInShare on Reddit
asianewsdayOctober 14, 2021