The story of a homeless single father and his daughter who sell balloon dolls at night and sleep outdoors during the day spotlighted the challenges faced by families in China with financial troubles.

According to the video posted on Douyin on Aug 13 by a woman, surnamed Wang, the daughter is around five years old, dresses in a pink dress, and occasionally wears some of the balloon creations for fun.

The father decorates his luggage with balloon dolls that he tries to sell to people who are out at night. Inside the luggage are cotton-padded quilts, everyday necessities and the materials necessary to make the balloon dolls.

The father, from Xuchang in Henan province in central China, said they sleep on the streets during the day because he cannot afford a nice place, so he would have been forced to leave his daughter alone in a scorching hot flat.

“He said he and his daughter were the only ones remaining in the family,” Wang said. “He had to take his daughter with him because there is no one at home who can help him with child care and the girl’s kindergarten is on summer break.” 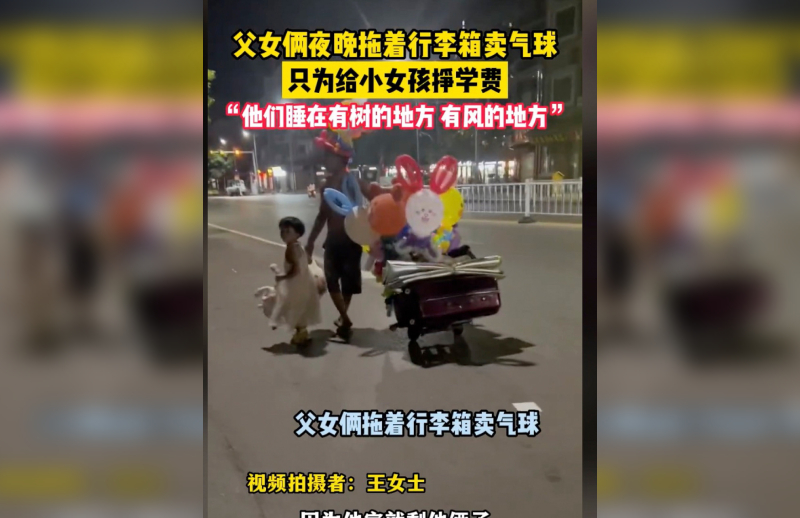 According to the father, whose identity has not been revealed and who has been dubbed “Balloon Father” by people online, he had many outstanding bills, as well as thousands of yuan in unpaid salary from working on construction sites.

“To save money, he said he can only afford cheap housing, which does not have an air-conditioner, and the youngster does not want to stay home alone,” according to Wang. “Due to the scorching heat, the father decided not to rent a place and instead sleep on the streets.”

See also  China has 33 ways to get economy back on track, but critics say ‘adjusting zero-Covid strategy is key’

The father said they sell balloons until 2 to 3am and sleep in the shade under the trees during the day.

Wang met the pair when she was riding her electric bicycle home and stopped to buy a balloon from the man. She struck up a conversation and learned about the difficulties the father and daughter were facing.

“He chose to sell balloons to raise money for his daughter’s education,” said Wang.

Despite his dire circumstances, he dressed his daughter like a princess in a puffy pink skirt and the girl had a stuffed rabbit doll she carried everywhere.

After the video went viral, many people praised the father for lavishing his daughter with love despite financial constraints.

“Even though life is hard, the father gave his daughter all the love he has,” a person commented.

Another wrote: “The father held his daughter, and the daughter held her doll. They are both clutching the things that are most important to them.”

Earlier this week, another story of a father with childcare problems went viral online. That father was a ride-hailing driver, and a passenger called the police when she thought his daughter, who was sleeping in the boot of the car, was a kidnapping victim.