More than 20 people have appeared in a Hong Kong court charged with rioting as hundreds of supporters gathered outside the building chanting “revolution of our time” and “liberate Hong Kong”.

The court hearings on Wednesday marked the first time the city’s authorities have resorted to the serious charges of rioting in a wave of unrest that has plunged the former British colony into its biggest political crisis since its return to Chinese rule in 1997.

The charges, which follow arrests during violent clashes between police and protesters on Sunday, infuriated activists who have demanded that the government avoid using the term “riot” to refer to the demonstrations.

Under Hong Kong law, rioting is defined as an unlawful assembly of three or more people where any person “commits a breach of the peace”, and a conviction can carry a 10-year prison sentence.

As the crisis in Hong Kong mounted, reports on Wednesday said that the US was monitoring what a senior Trump administration official called a buildup of Chinese forces on Hong Kong’s border.

Although the nature of the Chinese buildup was not clear, the anonymous official told Bloomberg that units of the Chinese military or armed police had gathered at the border.

News of the rioting charges sparked ugly scenes outside a police station on Tuesday night and the protests continued as the accused began to hear their cases in court on Wednesday.

Although 44 people were charged with rioting, only 23 individuals had the charges read out in court on Wednesday, Associated Press reported. It was not clear if the others would appear later.

Nine of the defendants had been released on bail of HK$1,000 (US$128) by noon, Reuters reported. They were ordered to remain in Hong Kong and a curfew was imposed between midnight and 6am.

“I’m not scared to protest. This whole thing today is just making me more angry,” said Gartner, a 21-year-old protester outside the court who declined to give his full name.
“I don’t think it will scare people.”

“The Chinese government just wants to scare people not to go out and protest again. It will deter some of us,” another supporter named Syrus, 19, said outside the court.

In Tuesday night’s protests, several hundred protesters mobilised in the streets outside the city’s Kwai Chung police station. They chanted slogans and threw eggs at the police station.

Police used pepper spray to try to disperse them. One officer also appeared carrying a shotgun, which he pointed at protesters. It was not clear if the weapon was loaded.

In one video circulated on social media, a police officer was seen punching a photographer, then wildly waving a baton at a journalist, who was wearing a yellow vest and who was forced to flee.

Police said in a statement on Tuesday that the people facing riot charges had set up roadblocks, broke fences, damaged street signs and attacked police officers with bricks and iron rods. One of the accused is a 33-year-old man who was also charged with assaulting a police officer. Separately, a 24-year-old man has been charged with possessing a weapon.

A total of 49 people, including 32 men and 17 women between the ages of 16 and 41, had initially been arrested from the scene on Sunday. Hong Kong police said it would not rule out the possibility of further arrests as it investigates four others released temporarily or out on bail.

The unannounced protest on Tuesday capped another day of unrest. During the morning rush hour, commuters argued with demonstrators who blocked subway train doors in their continuing movement to demand greater accountability from the semi-autonomous Chinese territory’s government.

The action targeted rush-hour traffic at several stations. MTR responded by providing minibuses to replace delayed trains, and normal service was restored by around noon.

One protester, Ken Chan, said he wanted MTR officials to explain why they allegedly failed to take action on 21 July when a large gang of men in white shirts beat dozens of people inside a train station as a huge protest was winding down.

“How could they let the triads in white attack people on the platform randomly, including the elderly and children in the train?” said Chan, 32. “Some of the elderly got smacked on their heads, but [MTR staff] turned a blind eye to it.”

Lorraine Lee, 26, said the subway disruption was an attempt to remind people of the government’s alleged failure to deal with social, economic and political injustices.

“The government has not been addressing the problems in our society,” Lee said. “That is why now Hong Kongers have no choice but to use different ‘creative’ approaches to remind people what is happening in Hong Kong.”

The South China Morning Post reported on Tuesday that the city’s corruption watchdog was setting up a special group to investigate the police’s response to the 21 July attacks. Many protesters have accused the police of colluding with triads, Hong Kong’s organized crime syndicates, and of failing to protect the public.

The disruption is part of a pro-democracy movement that has seen hundreds of thousands take to the streets this summer for marches and rallies. The protests have shaken the government in Hong Kong while the Chinese authorities have accused unidentified foreign actors of encouraging the protests.

Activists began protesting in early June for the government to withdraw an extradition bill that would have allowed people to be sent to stand trial in mainland China, where critics say their legal rights would be threatened. The government suspended the bill, but the protests have expanded to calls for democracy and government accountability. 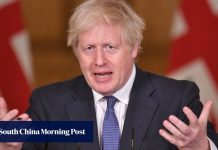 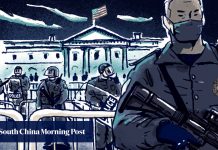 Entain plays a strong hand in a show of far-sightedness

The Guardian view on Xinjiang and crimes against humanity: speaking and acting | Editorial 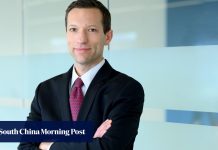 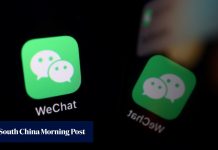 Tencent super app WeChat celebrates a decade of influence in China’s online world, but are its best years behind? 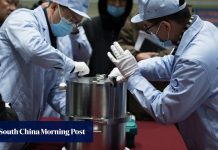 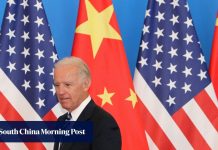