Boris Johnson’s promise to give millions of Hong Kong citizens a path to UK citizenship is a remarkable offer from a government that has spent four years wrestling with Brexit so as to end the free movement of people from Europe.

For one door to be slammed shut only for another to be opened so wide is striking, especially since the policy’s popularity among the Tory membership or pro-Brexit voters has yet to be tested. Recent polling by the Cabinet Office unearthed widespread ignorance about China.

The argument in government circles is that Brexit was never about halting migration, but about sovereignty and the right for the UK to control its own migration policy, including by selecting those with the skills most needed in the UK.

It can be argued that the quartet at the top of the Conservative party are the archetypal beneficiaries of migration. The family of the home secretary, Priti Patel, fled Uganda. The father of the foreign secretary, Dominic Raab, came to the UK from Czechoslovakia aged six in 1938, following the Munich agreement, which gave parts of Czechoslovakia to Nazi Germany. The grandparents of the chancellor, Rishi Sunak, arrived in the 60s from east Africa. Even the prime minister, Boris Johnson, a product of Eton and Oxford, has both Turkish and American ancestors. They are not quite citizens of nowhere, the phrase used insultingly by Theresa May, the former prime minister, but all four have backgrounds that make them alive to the benefits of political asylum.

There is also a streak of guilt that runs through the Conservative party about its treatment of Hong Kong citizens, and an admission that, under the leadership of Margaret Thatcher, the great cold warrior, it placed the people of Hong Kong into the hands of the Chinese Communist party in 1994.

After the handover, Hong Kong citizens ended up with a jerry-built halfway house. They could hold a British national overseas passport, providing them consular assistance and protection through UK diplomatic posts, but they would not have the automatic right to live or work in the UK. Those born after 1997 would have no rights.

In his memoirs, the last governor of Hong Kong, Lord Patten, wrote: “Even in the 1990s many Conservatives and much of the British media resisted any idea we should be moderately generous in the award of citizenship to some of those who lived in Hong Kong (often serving directly the colonial power) and deserved a guarantee if necessary they could look to Britain for a home after 1997. Civis Romanus sum was not to be translated into a modern British obligation. Australia, Canada, both of course Commonwealth countries, were much more generous over the granting of citizenship to Hong Kong residents. They were a lot more maternal than the so-called ‘mother country’.

Thatcher took some political flak at the time. Paddy Ashdown, the Mandarin-speaking leader of the newly merged Social and Liberal Democrats, defined his party at its birth in 1989 in the wake of Tiananmen Square by campaigning for Hong King citizens to be given the right of abode.

So how has Ashdown’s liberal view become the political consensus? There were, after all, influential migrants at the top of the May and David Cameron governments. Cameron, a Sinophile, confined himself to urging President Xi Jinping on a state visit to the UK in 2015 to allowing Hong Kongers to choose their own leader without Beijing’s prior vetting. Cameron had seen what had happened to Angela Merkel when she opened the door to Syrian refugees in 2015, and was not going there with Hong Kong.

Yes, individual cabinet members have played their part in the change of mind, but bigger trends forced Johnson into a choice. With protests growing ever more violent in Hong Kong and elections producing pro-democracy legislatures, the possibility that China would wreak revenge and end the “one country, two systems” arrangement had to be countenanced. A cross-government contingency planning group was set up in September.

The contingency group was formed amid a broader rethink in the Conservative party about China. By last summer an influential group of Tory MPs ranging from Iain Duncan Smith to Damian Green and Tom Tugendhat came to the conclusion that the rise of China under Xi was a threat to the west and needed to be resisted. Global Britain, a foggy concept for many years, came to be defined as a commitment to openness, democracy and a rules-based order. Hong Kong serendipitously became the rallying point for this foreign policy. China’s handling of coronavirus, and the controversy over Huawei, has further embedded this process.

The UK has few levers apart from moral persuasion with which to deter Beijing from pressing ahead with the security laws. A British-enabled mass exodus of the population of Hong Kong, the jewel in China’s economic crown, would leave that crown badly damaged.

Johnson has taken a big gamble, both in confronting China and offering the UK as a safe haven to so many. Quite whether he knows the extent of the gamble is unclear. 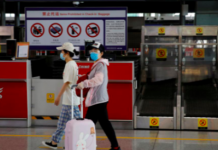 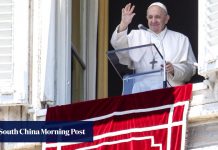 Google scraps cloud initiative in China and other ‘sensitive markets’

Lord Patten: Trump's re-election will hurt efforts to stand up to China 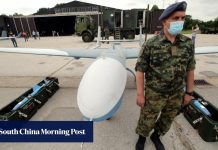 Serbian military gets reconnaissance drones and missiles from China 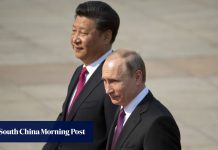