Asia Newsday
Asia Newsday > Singapore > 'I trusted her': Man, 62, hands $50k to 'lover' for safekeeping; she says no such thing
Singapore


It was a twilight romance gone sour — at least from the perspective of one party involved.

For the past eight years, 62-year-old Steven Chia has been trying to recover $50,000 which he says was handed over to his former work supervisor turned lover for safekeeping.

In an interview with Shin Min Daily News, he shared that the pair met at work in 1996 and were colleagues in the shipyard industry for several years before he quit to pursue higher studies.

Chia claimed that his relationship with the woman, surnamed Hong, only turned romantic when they bumped into each other in 2014 and he started to pursue her.

Hong, who is two years younger than Chia, also became his landlord, after he started renting a room in her condominium for $600 a month. Chia added that as he was bad with his finances, he entrusted $50,000 to Hong for safekeeping — an act which Hong has since denied.

“With our mutual friends as witnesses, we signed an agreement that the other party would have to return the money whenever I needed it,” claimed Chia.

However, the pair broke up after three months, he said. And when Chia asked for the return of the $50,000, Hong refused.

“I handed the sum to her for safekeeping because I trusted her. I didn’t think she would do this.”

Chia added that the situation had remained unresolved for many years as he had lost the original agreement, leaving him with only a photocopy. 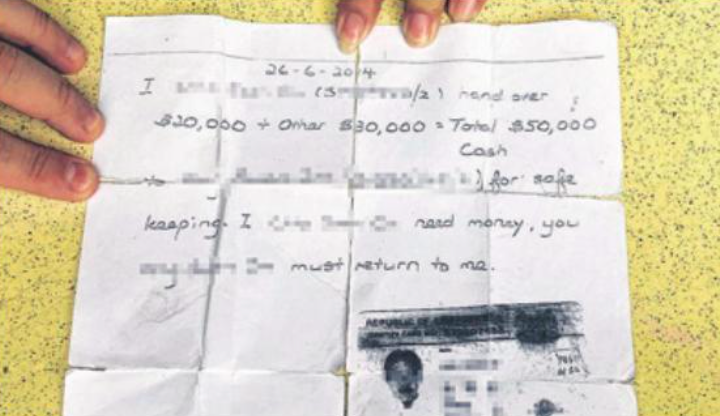 Chia said he had called and texted Hong many times as well as knocked on her door, to no avail. He had also made a police report, sought advice from a lawyer and approached professional debt collectors, but the latter’s fees were too expensive, Chia said.

See also  Buy an electric car on your phone, collect it from a plant in Singapore

When contacted by Shin Min Daily News, Hong, 60, denied ever receiving any money from Chia for safekeeping or signing any agreement.

She claimed that the pair only had a superior-subordinate relationship at work. Hong also denied renting out a room to Chia at any point in time.

Hong told the Chinese evening daily that Chia had been fired from his job for being caught drinking on multiple occasions, and that even though he had pursued her, they were never in a relationship.

“He’s simple-minded and his feelings were all one-sided, I don’t like him at all,” said Hong, claiming that Chia’s accusations came after he was rejected. “I’m very disappointed in him,” she added, stating that she’s considering applying for a personal protection order to avoid further harassment from Chia.

One of Chia’s colleagues told Shin Min Daily News that he had seen Chia handing Hong a sum of money, with the latter signing on a document. However, it is unclear if it is the original agreement which Hong was referring to.

Chia also revealed that he had once dated Hong’s late sister, with the latter giving him a Rolex watch as a gift. Hong’s sister perished in a car fire in 2002, said Chia.

Hong, however, told reporters that Chia’s relationship with her sister none of her concern, and that her differences with Chia had nothing to do with the Rolex watch.

Lost ‘over $1 million’ due to gambling habit

Chia shared that he used to earn $5,000 a month as a foreman in his younger days, with his salary crossing $10,000 whenever he was posted out to sea.

But his substantial savings was whittled away over the years due to his gambling habit.

“I had a large sum of savings but I lost all of it through gambling,” said Chia, estimating the losses to be “more than $1 million”.

Chia added that a recent job loss coupled with his depleted savings prompted his renewed efforts in trying to recover the $50,000 as quickly as possible.