JAKARTA (REUTERS) – Indonesia’s Semeru volcano on the east of Java island erupted on Saturday (Dec 4), spewing out clouds of smoke and ash and sending residents running in some nearby areas including the district of Lumajang.

No damage to buildings or casualties were reported, the country’s disaster mitigation agency (BNPB) said in a statement, adding that the local disaster agency was setting up evacuation tents.

Videos shared by the BNPB showed local residents running as towering smoke and ash blanketed some nearby villages in East Java province.

Volcanic ash and hot clouds were detected in the area at about 3pm, said Mr Abdul Muhari, a BNPB official.

Mr Thoriqul Haq, district head of Lumajang near Semeru, told Reuters that the road and bridge connecting Lumajang and the nearby city of Malang were severed.

“This has been a very pressing, rapid condition since it erupted,” he said. Mr Haq added that evacuations were underway, but did not give details. 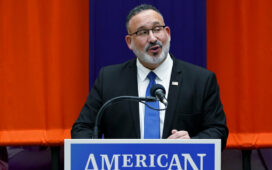