SINGAPORE – Throughout his teenage years, Mr Jaydon Larsson Dunning has involved some form of altruism on his birthday.

Last year, he ordered food from a social enterprise eatery that hires people with special needs. In 2019, his family spent a day at a shelter for street animals in Sri Lanka.

On Sunday evening (Aug 7), he celebrated his 18th birthday with a group of 12 migrant workers at Sakunthala’s Food Palace in Race Course Road.

The second-year veterinary technology student at Temasek Polytechnic was also joined by his mother and five friends and relatives, including his grandparents and his mother’s husband, who distributed Indian sweets to everyone.

Within minutes, the hosts and guests were taking wefies and introducing themselves.

All 12 migrant workers are from the southern Indian state of Tamil Nadu and they work at Keppel Shipyard.

The organisation supports the needs of migrant workers here.

Ms Karen, 45, an admissions officer at an international school, was waiting for an occasion to carry out the “Makan with Migrant Workers” initiative, and felt her son’s birthday would be a fitting event.

Mr Dunning was initially uncertain about the event because he was used to having small and intimate gatherings on his birthday.

“But after my mum elaborated on what we’d be doing and why are we doing it, I thought it would be a meaningful and cool experience for all,” he said.

Ms Karen added that it is not challenging to get to know the migrant community better.

One of the guests, Mr Divagar, 28, who has been working in Singapore for six years, said this was the first time he was having a feast at a restaurant here. He added that many of his colleagues have not had a meal with residents in Singapore before.

“Because of Covid-19, I only started going out on days off six months ago. Before that, I stayed in my dorm and went to work. Today is my second time in Little India,” added Mr Divagar, who goes by one name.

Mr Ram Kumar, 29, another guest, said: “Tonight is a happy moment… It helps me relieve work pressure and stress. Jaydon feels like a brother.”

Over the years, Mr Dunning and his mum have also been supporting migrant workers. Since he was 12, they have been donating old clothes to construction workers at their neighbourhood in Tampines.

When the Covid-19 pandemic hit the community hard in early 2020, the mother and son sent care packages containing food and toiletries to affected dormitories.

Mr Dunning said: “It was really fulfilling getting to know the migrant workers and see them enjoy themselves, laughing, taking photos and sharing the moment with their friends in India through video call too.” 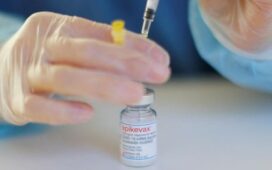