Ireland on Sunday dismissed a claim by Prime Minister Boris Johnson that the EU is plotting destabilising new barriers between Britain and Northern Ireland, as Brexit talks turn increasingly heated.

“That’s simply not the case,” Irish Justice Minister Helen McEntee told Sky News. “Any suggestion that this is going to create a new border is simply not true,” she said.

McEntee said that provisions for Northern Ireland in Britain’s EU withdrawal treaty were agreed by both sides to ensure fair competition after Brexit, and to comply with a 1998 peace pact that ended three decades of unrest in the province.

The treaty also “ensures the integrity of Northern Ireland as part of the UK”, she said, and it “ensures we do not see any kind of a border re-emerging”.

Writing in Saturday’s Daily Telegraph newspaper, Johnson had accused the EU of threatening to tear the UK apart by imposing a food “blockade” between Britain and Northern Ireland.

Johnson said the EU’s stance justified his government’s introduction of new legislation to rewrite its Brexit withdrawal treaty—a bill that is causing deep alarm in Brussels, as well among former British prime ministers and his own MPs.

Belarus could bring down 'another iron curtain' across Europe

Experience: my brother spied on me for the Stasi 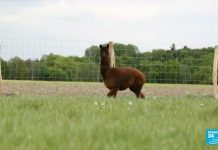