A Singaporean man wrote on social media that he would want his future children to be born in India to have better job prospects in Singapore.

In a Facebook post on Tuesday (Feb 16), one Chris Ang posted in the group ‘SG Opposition’. He wrote: “I’m Chinese but am considering to have my future children born in India!”

He continued: “They’ll have better scholarship & job prospects than locals here under the CECA agreement!”

The India-Singapore Comprehensive Economic Cooperation Agreement, CECA, is a free trade agreement between Singapore and India to strengthen bilateral trade. It eliminated tariff barriers, double taxation, duplicate processes and regulations and provided unhindered access and collaboration between the financial institutions of Singapore and India.

His sentiment is one that is shared by a number of Singaporeans who feel similarly. For example, it was a point touched on by Deputy Prime Minister Heng Swee Keat during his reading of the Budget 2021, where he acknowledged in his speech that some Singaporeans have been concerned about the country’s reliance on foreign labour.

At the same time, he said, businesses and trade associations have said that they have found it difficult to hire locals, and ask that foreign worker quotas not be further tightened.

“The way forward is neither to have few or no foreign workers, nor to have a big inflow. We have to accept what this little island can accommodate”, DPM Heng said.

Out of those who commented, many agreed with Mr Ang.

However, some found his post to be distasteful and accused him of racism and xenophobia. He had a reply to those comments as well. 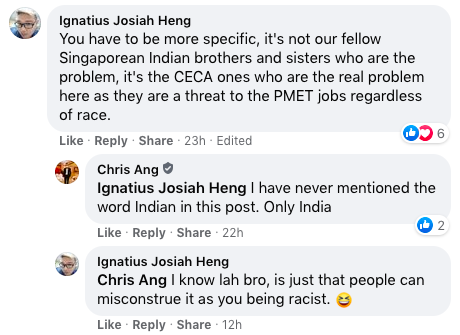 TISG has reached out to Mr Ang for comment and clarification. /TISG