Malaysia election 2022: 'Pakatan Harapan's to lose' or Umno's route back to power?

Umno is seeking a return to power in Malaysia this week, four years after being booted out in 2018’s historic general election – and the stakes could not be higher, amid high-profile corruption cases that threaten to decimate the party’s top ranks.

Umno, and the Barisan Nasional (BN) coalition that it leads, are leaning on their six decades of experience leading the nation to offer voters “stability and progress” that they say will strengthen the economy and put an end to the persistent political instability of recent years.

“We realise the mistakes we made before and not only do we hope to fix those mistakes, but we are determined to do better,” Umno President Ahmad Zahid Hamidi, who is also BN chairman, told a news conference on Tuesday.

Ahmad Zahid has called the result of 2018’s vote, which led to Malaysia’s first change of government since independence after voters angered by high living costs and allegations of rampant corruption at the highest levels rejected Umno and its BN coalition, an “experiment” that had gone awry – blaming inept leadership in the Pakatan Harapan (PH) administration that won power in the polls but held it for just 22 months.

In the political crisis that followed the collapse of the PH government following Mahathir Mohamad’s resignation as prime minister, Umno clawed its way back to prominence. First, as part of a newly formed Malay nationalist coalition administration under Muhyiddin Yassin and later his successor, the party’s own Vice-President Ismail Sabri Yaakob.

Malaysia’s king appointed Yaakob as prime minister in August last year after about a dozen Umno MPs withdrew their support from Muhyiddin, forcing him to step down.

For Umno’s critics, its pitch to restore stability and progress if it wins this week’s elections is a mere smokescreen for its top leaders’ alleged true intentions: Saving themselves from criminal prosecution.

At an event in October, Ahmad Zahid said BN has no choice but to “win dominantly” in this election or risk having more of its leaders facing “selective persecution” should PH be given the mandate to rule for a second term.

The current Umno president is facing dozens of charges related to corruption at a charitable foundation that he set up. His predecessor, Najib Razak, is currently serving a 12-year prison sentence for corruption and abuse of power linked to a former unit of the scandal-tainted 1MDB state fund that he founded.

James Chin, a professor of Asian studies at the University of Tasmania, said the Umno-led BN coalition’s promise of a return to stability would translate into the wiping out of any reformist gains made in the years since it last held power.

“If Barisan Nasional wins then the last four years did not exist,” Chin told This Week in Asia. “It will be like a dream, the country will revert back to [before] 2018.”

Umno’s top leadership was emboldened to push for an early election by the party’s resounding wins in two recent state polls and the fact that it had managed to reclaim the premiership through Ismail Sabri after months of political manoeuvring.

But the gamble may yet backfire. Nearly six million new voters are eligible to cast their ballots in this week’s election – a figure boosted by Malaysia lowering its voting age from 21 to 18 since the last polls. Also, three major coalitions are contesting this time, instead of just two, making the outcome even more difficult to forecast.

“There is a rising possibility that at least three or more parties/coalitions are needed to co-operate to form a government with a simple majority,” pollster Merdeka Centre said in a pre-election survey.

Another problem facing Umno is its unpopular president, who is rumoured to be putting plans in place to claim the country’s top office for himself if the party comes out on top.

Ahmad Zahid was elected as party president after Najib resigned following Umno’s defeat in the 2018 polls, and is the first to hold the office without simultaneously being the country’s prime minister.

The 69-year-old has called Ismail Sabri BN’s “poster boy” for the premiership, but the coalition faces a trust deficit after it went back on a similar pledge to retain Johor’s chief minister when it won state polls there in March.

Mahathir, Malaysia’s two-time prime minister who at 97 is contesting his 11th general election, said a BN win would equate to a victory for corruption.

“If they win big and [Ahmad Zahid] becomes prime minister, his cases will be dropped along with Najib’s 1MDB cases and other crooks that lead Umno and Barisan Nasional,” said the elder statesman, who himself led Umno for 22 years during his first premiership.

“This is Barisan Nasional’s struggle. A struggle for their own self.”

PH made its pitch even simpler, saying a vote for BN was a vote for Ahmad Zahid as prime minister.

Horse-trading expected if no clear winner 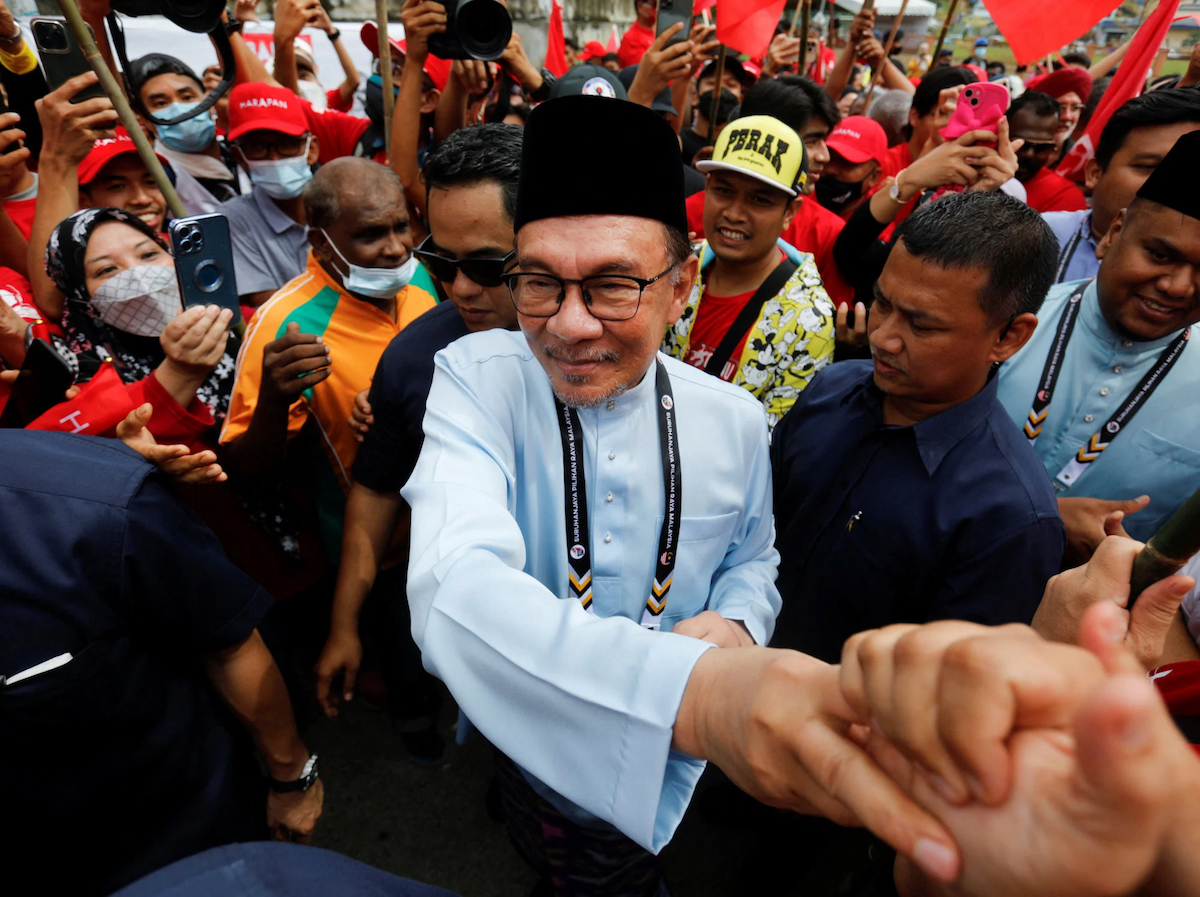 With votes likely to be split between BN, PH and the upstart Perikatan Nasional (PN) – formed by Muhyiddin during his premiership – there is a high likelihood that this election could result in a hung parliament, leading to talk of the various post-election tie-ups that would be needed to secure a simple majority in the 222-seat Dewan Rakyat.

At a campaign stop on Tuesday, Mahathir accused Ahmad Zahid of brokering such a deal with Anwar Ibrahim , allegedly offering to back the PH chairman as prime minister in return for the Umno president and Najib walking free.

“I’m certain that they will work together, and we know that Anwar and Zahid have met,” Mahathir said. Both Anwar and Ahmad Zahid have denied the claim.

James Chai, a visiting fellow at Singapore’s ISEAS-Yusof Ishak Institute, said there would be a massive backlash against Anwar if he were to strike such a deal with Umno.

“The public would not be able to accept as it would go against what was promised to them: A fight against corruption and to never drop corruption cases for political reasons,” he said.

Chai said Anwar appeared reluctant to attack his former protege Ahmad Zahid, but would not go so far as to risk such an arrangement just to secure the premiership as he would lose popularity and hand ammunition to those seeking his overthrow.

“Anwar couldn’t govern under that circumstance as well,” he said.

Anwar, who Mahathir sacked as his deputy in 1998 and had jailed on corruption and sodomy charges, said the latest allegation of co-operation with Ahmad Zahid was emblematic of Mahathir’s long-held aversion to him becoming prime minister.

“He will fall ill if Anwar on the 20th of November becomes prime minister … he will be the first to fall ill,” Anwar said of Mahathir at a campaign stop, referring to himself in the third person. “But I pray for his good health.”

Rafizi Ramli, deputy president of Anwar’s People’s Justice Party (PKR), sees no reason for secret deals as he expects PH to score more than 100 seats in the polls – based on a study by big data analytics firm Invoke, which he founded.

Public support for Umno plummeted nine percentage points to just 18 per cent when parliament was dissolved, said Rafizi, who believes PH will come out with the largest share of seats on the Malay Peninsula.

This puts the semi-autonomous states of Sabah and Sarawak on Malaysian Borneo in something of a kingmaker role, he said. Sarawak recently assumed such a role when its ruling coalition of local parties, dubbed Gabungan Parti Sarawak (Sarawak Parties Alliance – GPS), backed Muhyiddin as the country’s eighth prime minister following 2020’s political coup.

“I think when the time comes, common sense will prevail on the part of Sabah and Sarawak,” Rafizi said. “That is why I am not interested in talking about [Mahathir’s party], Perikatan Nasional or Barisan Nasional.”

Razlan Rafii, a member of Umno’s supreme council, responded to the claims by saying there was “no proof that there is waning support” for the party, telling local media that it was BN, not PH, which had won seven by-elections since 2018.

Undecided voters could still swing it

Surveys and polls may suggest otherwise, but political analyst Bridget Welsh said speaking to voters on the ground during her nationwide election tour had convinced her that there was still an “unprecedented amount” of people who were undecided.

“The key is who captures them. They are the last minute swing,” Welsh said.

PH hit the ground running in its bid for the top spot, pipping its competitors to the post by unveiling its slate of candidates and election manifesto first. Rafizi, PKR’s deputy president, said he’d been campaigning in different towns every night to leverage his popularity and win votes.

BN, meanwhile, took nearly a month after parliament was dissolved to launch its manifesto – becoming the last of the big three coalitions to do so.

Tunku Mohar, an analyst from the International Islamic University of Malaysia, said Umno’s initial fervour about its “best chances to win” had since died down when the new electoral realities hit home.

“There’s disquiet in Umno, especially since nomination day and the events since that showed Pakatan Harapan is gaining momentum,” he said.

Umno’s candidate nomination process was fraught with conflict after Ahmad Zahid dropped prominent and long-time party “warlords”, some of whom retaliated by contesting as PN candidates.

Some grass-roots supporters have shown their displeasure with the candidates’ list by shutting down campaign centres and taking down party flags and banners.

A combination of Ahmad Zahid’s unpopularity, the packed field of candidates contesting the polls and BN’s internal strife could give PH the edge, but Tunku Mohar said victory may yet elude Anwar’s coalition if it fails to get its voters to turn out in force.

“Even voter turnout in their party election was rather low. It’s difficult to read the voters’ minds this time around,” he said.

“In this respect, this election is Pakatan Harapan’s to lose.”