For Sugu Pavithra, her meteoric fame these past few months has been nothing short of amazing.

Not only has the Malaysian’s wholesome cooking videos captured an enthusiastic online following (she has attracted over 630,000 subscribers on her YouTube channel in four months), Sugu even earned the praise of Malaysia’s Prime Minister Tan Sri Muhyiddin Yassin and he had gifts specially delivered to her home.

Dropping out of school despite scoring 5As in UPSR

However, things didn’t always go so smoothly for the mother of two. In a recent interview with Gempak, the 28-year-old revealed the heartbreaking story that she had to give up her studies when she was 16 to support her family. Her father was a construction labourer in a factory.

“My father told me to work to help the family. At the time, I was the eldest in the family as my older sister was being taken care of by my grandmother.

“When I was in primary school, I had scored 5As in UPSR (Malaysia’s national examination for Primary 6). Bahasa Melayu has always been my favourite subject. Unfortunately, I didn’t get to complete my high school education and dropped out in Form 4.

”We struggled with money since I was young. Even getting the bus fare to go to school was a difficult thing. That is why I couldn’t focus on my studies,” Sugu shared.

After Sugu left school to work in a factory, she managed to further improve her Malay language skills by interacting with her Malay colleagues.

Who knew then that Sugu would be using her fluent Malay in her cooking videos to captivate a wider Malaysian audience.

Sugu is a shining example that hard work and a positive, never-give-up attitude does indeed pay off.

To top off the good news, Sugu and her husband also received their first earnings from YouTube on May 19, when she travelled from her home in Sungai Siput all the way to Ipoh to collect her deferred payment from the video-sharing company at the main post office here.

With the immense popularity of their channel, netizens have been speculating over how much exactly Sugu and her husband, M Sugu, had earned since becoming partners with YouTube. Word got out that they have made as much as RM144,000 (S$47,000)!

The answer was finally revealed during a recent interview with Harian Metro. Sugu said: “What we’ve earned now is more than enough. For the first time, I received US$2,000 (RM8,700) of payment from last month. I never thought of earning this much money.” 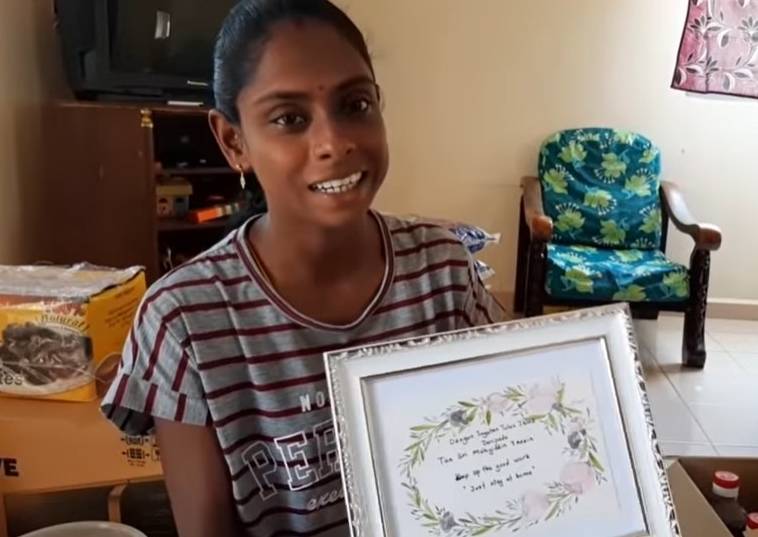 Prior to this, the housewife only relied on her husband who works in the estate with only RM1,000 worth of monthly income.

Sugu told Bernama that she would use the payment to buy clothes for herself and her family.

“We are not rich people. We are so happy to receive the salary although it is not as much as people claimed on social media, because my husband and I have been patiently waiting for this.

“I will use the money to buy clothes, go for hair rebonding and also buy prayer materials for my house,” Sugu added.