To ensure that staycations for her sister – who was diagnosed with autism when she was two – are comfortable, 27-year-old Andreana Tay makes it a point to recce and stay at those hotels alone first.

And it’s a good thing she did so for her recent stay at one hotel left her quite “traumatised”, she said.

In a TikTok video uploaded yesterday (Sept 15), Tay shared that she had booked a one-night stay at The Great Madras located at Little India on Sept 10, paying $191 for it.

Calling it “the worst staycation ever”, she described how some parts of the toilet walls and floor were mouldy and that the door was faulty.

In the comments, she also said there was “a smell coming out from the toilet” as well as the aircon.

Her bed wasn’t in the best of state either and Tay said she found multiple hair strands on it as well as a dark stain on the sheets.

“Felt as [though] they flipped the covers instead,” she theorised in the video.

To top it all off, she said the floor was not cleaned and had visible specks of dust, prompting Tay to wonder if the place had been swept at all.

A check by AsiaOne showed that The Great Madras had received an SG clean certification from the National Environment Agency dated January this year.

However, Tay emphasised that she did not blame the staff who had been “super nice and polite”.

“I can see that they tried their best,” she wrote in the comments, adding that perhaps the state of her room was due to an understaffed hotel.

⚠️ TW ⚠️ not for those who are clean freaks. The staff were super nice and polite, but I legit think that they are underpaid/ understaffed, or both! If not why would they have done such a bad job tho? Legit traumatised and I can’t get a refund apparently… #worststayca #staycationsg

Speaking to AsiaOne, Tay shared that the hotel did offer her another room but she did not accept it as she had  “zero confidence” in the hotel after the incident.

She added that she was unable to get a refund from the hotel as they had “already offered [her] the exchange of a better room” which she rejected.

“I have never encountered bad [hotels] before in Singapore, like, this is legit by far the worst for that price range,” Tay told us bluntly.

In response to AsiaOne’s queries, a spokesperson from Hotel Calmo, which The Great Madras is under, said they “sincerely apologise for the inconvenience and experience” Tay encountered.

They said that they offered Tay another room as the one she booked “did not meet her expectations” but she rejected the offer and left the hotel.

The spokesperson said that as part of their refund policy, in the event the hotel is unable to offer its guests alternate rooms, the guest’s room charges will be refunded.

As of the time of writing, the TikTok has garnered over 53,700 views and 65 comments.

A number of netizens have come forward to share their own y experiences with The Great Madras with some saying that they had encountered cockroaches and even mushrooms in their hotel room. 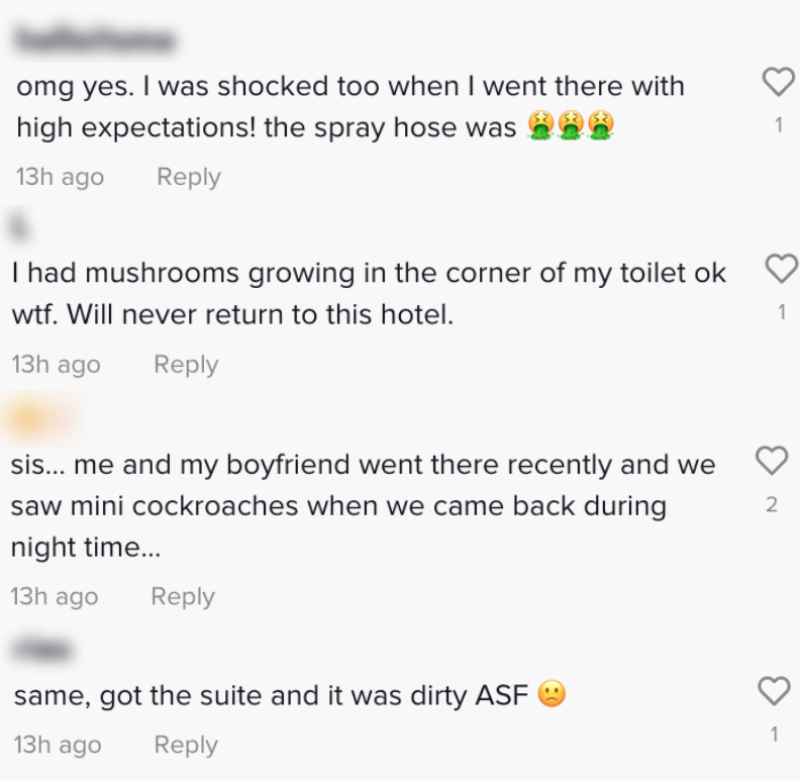 However, not everyone was unhappy with this hotel, with one netizen commenting on TikTok that her brother stayed there for 10 days and was “very happy” except for the noise at night from the area.

Others on Google reviews said they loved the room and enjoyed their stay, with some even making repeated bookings. 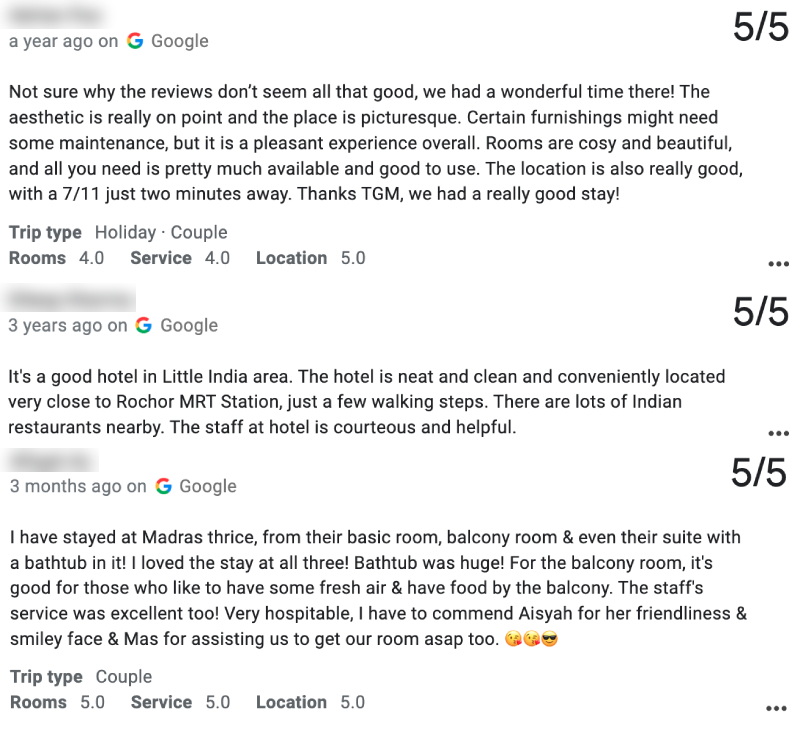 Just last month, Rachel Tristan documented her unpleasant stay at Hotel Chancellor@Orchard on TikTok, saying that one of the rooms smelt damp and sour and how her replacement room “reeked of smoke”.