Djokovic has now won all 17 matches in the semi-finals and beyond at Melbourne Park and will bid for a ninth title on Sunday.

His opponent Karatsev, the Russian qualifier who had never played in a Grand Slam main draw before this tournament, didn’t disgrace himself in a 6-3 6-4 6-2 defeat but there was a clear gulf in class between him and the world No. 1 as his fairy tale run came to a bitter end.

Djokovic’s hopes of an 18th Grand Slam title looked in serious threat earlier in the tournament when he suffered an abdominal injury in the third round but a quick win in under two hours will be an extra bonus for him.

The extra day’s rest over his final opponent – Greek fifth seed Stefanos Tsitsipas and Russian fourth seed Daniil Medvedev will fight it out on Friday to face the top seed – before Sunday’s final will also be viewed as a positive.

In truth, the injury doesn’t seem to be hindering Djokovic in the slightest and he will surely enter the final as the favourite.

He has already wrapped up one record during this tournament, with Rafael Nadal’s quarter-final exit confirming he will pass Roger Federer’s total of weeks spent at world No. 1 in March, and he will hope to cut gap on Nadal and Federer’s 20 Slams-record to just two majors by the end of the week.

While Djokovic will remain at the top of the ATP rankings, world No. 114 Karatsev will fly into the top-50 for the first time, climbing to No. 42 in the leaderboard.

The nerves were no doubt jangling for Karatsev but he settled them with a solid early hold.

A butterfly briefly troubled the world No. 1 in his second service game of the match, as did a rasping cross-court winner from his unfancied opponent, but he remained solid to stay in front.

In the fourth game, Djokovic gave the Russian a thumbs up after a fine volley on the stretch, which denied him a cute angled passing winner.

Two games later there was the first sign of trouble for Karatsev at 0-30 but he remained unmoved, holding with a brilliant drive backhand volley winner.

A sumptuous lob-smash combo from Karatsev drew rapturous applause from the Aussie crowd but he wasn’t laying much of a glove on Djokovic – whose serve is much improved in recent years – and the first signs of trouble shortly followed.

He fell 0-40 down in the eighth game of the set after a string of errors and Djokovic pounced, tormenting his opponent before an error flew off Karatsev’s racquet.

Two more breaks to love followed in the second set as Djokovic’s grip tightened on the match.

Djokovic surprisingly wobbled when he served for the set, with Karatsev converting his second break point of the match. Two games later he faced another two break points but squeezed through to take a two-set lead after 80 minutes.

Despite his struggles to get over the line in the second set, Djokovic struck in the first game of the third, breaking to assume total control of the match.

Karatsev, to his credit, kept plugging away and broke back to level at 2-2, but he wass broken again a game later before Djokovic stormed on to victory. 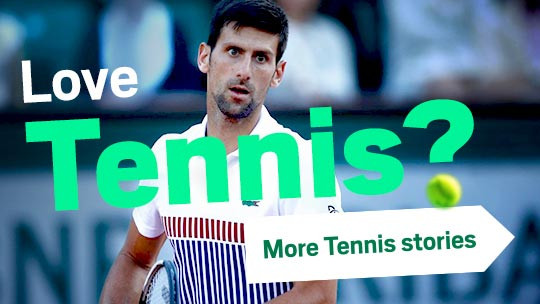