A graphic posted by the Housing and Development Board (HDB) on its Facebook page on May 14 depicting a husband and wife drying their laundry on bamboo poles was recently amended after some netizens raised concerns that the two resembled a same-sex couple.

The original graphic shows two individuals in one panel — both who looked like women — helping one another hang their newly-washed clothes on bamboo poles outside a kitchen window with the caption ‘My parents at age 29’.

The second panel depicts the same couple using HDB’s upgraded retractable clothes drying rack to hang their clothes with the caption above ‘My parents at age 65’.

This graphic was to highlight the upgrading works under HDB’s Home Improvement Programme.

However, it drew comments from some netizens confused about the captions and the cartoon, and how both parents look like women.

On Thursday (June 16), anti-vaccine campaigner Iris Koh uploaded a Facebook post on the original graphic questioning why HDB was featuring two mothers in the graphic.

“Now two women can legally get married and buy a flat ah?” she posted, questioning if we are “being infiltrated by liberal ideals covertly?”

She also wrote that she was “not against the LGBT stuff” and that she had “many friends who are gays etc”. 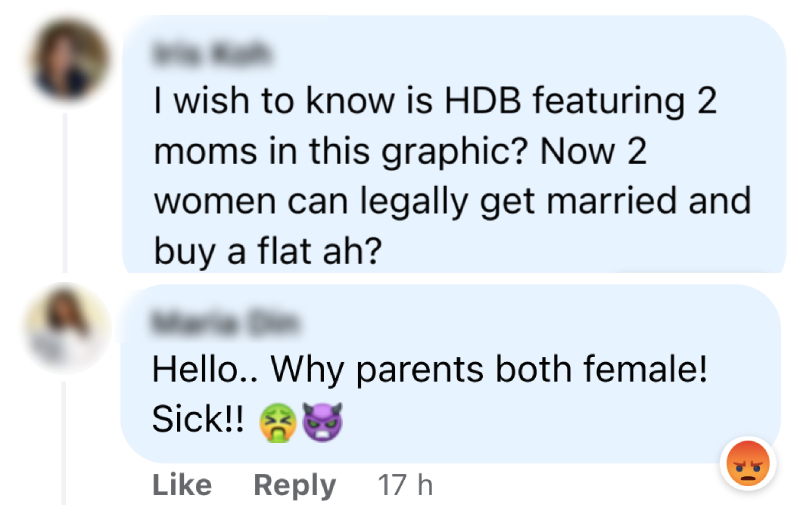 However, one Facebook user commented on Koh’s post that “I think you reading too much into a cartoon sia”.

That same day, the housing agency replaced one of the characters in the graphic with one that had shorter hair, presumably to look more like a man (graphic below).

HDB, responding to queries by AsiaOne, said the graphics depicting a husband and wife drying their laundry was intended to highlight the convenience of the retractable clothes drying rack, especially for senior residents.

“They were drawn in our house anime style, similar to some other graphics on our social media channels,” said HDB.

“Arising from feedback, we improved the graphics to avoid misunderstanding surrounding the characters featured in the graphic.”