'Please don't do this to F&B': Burger joint owner calls out family for getting half-eaten burgers replaced


It’s pretty common to have customers griping about F&B establishments, but it looks like one F&B outlet is biting back by calling out their unreasonable customers as well.

Owner of burger joint Nothing But Cheeseburger (NBCB) Tommy Wong took to TikTok to call out a family of three who visited his shop in Katong last Thursday (July 28).

The 36-year-old said in a video posted last Friday that all three members of the family asked to have their half-eaten burgers changed, claiming that their meat patties were not ‘well-done’.

Earlier, Wong had mentioned that his staff are trained to let customers know beforehand that his joint’s burger patties are usually done medium or medium-rare.

“They took the food and they ate it. The most ridiculous thing is that the son came up [to us] and said he wanted it well-done.”

As they were unable to take back the first burger, which was already half-eaten, Wong’s staff decided to give him a new burger.

A while later, the father came to the staff with the same request but he had already eaten more than three-quarters of the burger with just a mouthful left, Wong said.

Out of kindness, Wong agreed to replace his burger — since he had already replaced the son’s.

Just when he thought he was done, the mother approached them too, asking for a replacement as well.

“Please don’t do this to F&B shops, it’s very unfair to them,” Wong urged. “You basically wasted [everyone’s] time… the shop don’t even make money on your order, lose money some more.”

He added that it’s difficult for F&B owners to argue with customers as this tend to make the business look bad.

“So don’t take advantage of this, and especially if you’re not sure…let the [staff] know, or at least ask,” Wong said.

Originally a home-based business, NBCB opened its first outlet at Orchard Central in March, and has since expanded to its second outlet at Katong I12.

Speaking to AsiaOne, Wong said: “As a new business in the area and relatively unknown, we tend to accede to the customer’s request because we know it is disadvantageous to us should an argument arise.”

Despite the less-than-pleasant experience, Wong said that it won’t deter him from continuing to accede to customers’ requests.

“There are definitely genuine requests such as pregnant customers, or customers who just recovered from illnesses. As an F&B outlet we will always be customer-centric, but unfortunately, there are times where people just take advantage [of us].”

To prevent incidents like this from happening in the future, Wong added to AsiaOne that he has added signs in the shop to inform customers about the burger patties’ doneness.

Wong’s video has garnered more than 400 comments from netizens who agreed that the family was “taking advantage” of the situation. 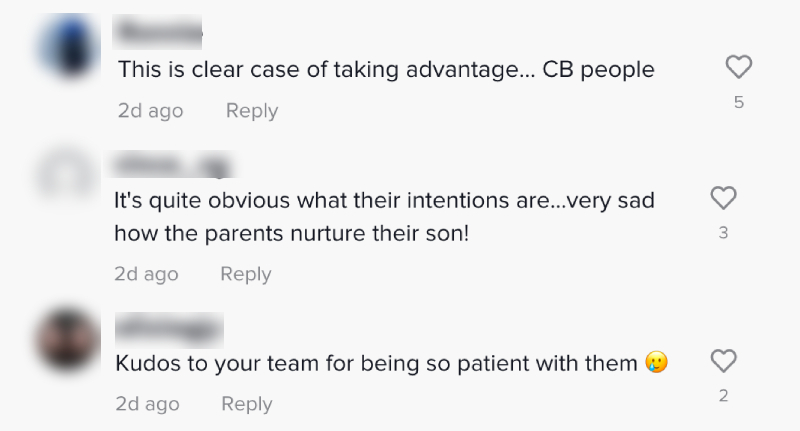 Last month, a stall owner at a coffee shop in Woodlands clapped back after a customer complained about paying $15 for a mixed platter consisting of three pieces of fried ngoh hiang and four pieces of fried beancurd.

If a customer wanted both in the form of a platter, it would cost $15.

Strong profits for most insurers’ Integrated Shield portfolios, but brace for premium hikes

These new courses will enhance your skills and advance your career