Hong Kong has had its third consecutive day of mass protests as demonstrators and riot police firing teargas and rubber bullets clashed in several locations throughout the city.

Tens of thousands of protesters, dressed in black and armed with umbrellas and hardhats, defied police orders to keep Sunday’s rally constrained to a park in central Hong Kong and fanned out across the city in the early evening. They streamed west and east, occupying main roads, setting up barricades, and chanting: “Reclaim Hong Kong!”

As the city endured a tense calm on Monday, all eyes were on Beijing where it was expected that the Hong Kong and Macao affairs office – China’s highest level body on the former British colony – would be holding a press conference at 3pm local time (0700 GMT).

It is believed to be the first time the unit has held a press briefing since Hong Kong was handed over to Beijing in 1997 and comes amid a flurry of condemnation of the protests from China’s state media.

In the latest round of editorials, China Daily claimed that “external forces” and “outside meddling” were to blame for the unrest.

It comes after the protesters again made Beijing’s representative office in Hong Kong a target for their anger on Sunday.

Riot police blocked a contingent of demonstrators on their way to the building and as the crowd grew, police fired tear gas and rubber bullets. The protesters responded by throwing umbrellas, rocks, eggs, and gas canisters back at the police. The protesters created a drum beat using street signs and traffic barriers as they tried to hold their ground.

“It lasted a whole minute. It was at least 10 rounds,” said Long, a 25-year-old medical volunteer who said he had helped pull demonstrators back from the frontline when they were stumbling and unable to see.

Over the past three days, demonstrators have rallied to condemn an attack last weekend on commuters by suspected triad gangs, an incident that has led to accusations of government collusion, denied by Hong Kong officials.

On Saturday, a peaceful march in the town of Yuen Long turned chaotic as police fired teargas, rubber bullets and sponge grenades, and charged protesters in a railway station. Thousands of demonstrators joined aviation workers at the airport for an 11-hour-sit-in on Friday.

The former British colony is facing its most serious political crisis since it was returned to Chinese control in 1997. Under the terms of that agreement, the semi-autonomous region was meant to maintain a “high degree of autonomy” through an independent judiciary, a free press and an open market economy, a framework known as: “One country, two systems.”

Sunday’s protests marked the eighth consecutive weekend that Hongkongers have taken to the streets in protests that began over an extradition bill that would have allowed wanted suspects to be sent to mainland China.

As the police fired continuous rounds of teargas into crowds on Sunday, some protesters fell to ground choking. One group sought refuge in a nearby apartment building when residents opened the gate, ushering them in. Demonstrators collapsed on the stairwell, some of them crying.

Police said they used teargas to disperse protesters who were hurling bricks at them but protesters insisted police fired first. “We are trying to protect our own freedom. We are doing this for this place, our place. I’ll be honest, I did throw things because I’m that angry,” said one protester, Angus, 24.

The protesters were then pushed back to smaller roads in Sheung Wan, a normally busy neighbourhood turned into a ghost town after shops closed and residents were warned to stay inside. Tourists and residents ran from the scene, covering their eyes and mouths.

Before midnight, the police had surrounded the protesters, shielding themselves with wooden boards and street signs. Teargas was lobbed at the protesters from all directions, shrouding the road and forcing the protesters to enter a mass transit station and leave.

Some protesters said the police appeared to escalating their tactics, with officers firing on protesters earlier and more frequently. “I can’t even count how many rounds of teargas they used,” said Roy Chan, 39.

In a statement, the government said protesters had pushed a cart of burning cardboard at police, “threatening the safety of police officers and members of public”. The government said it would “continue to give full support to police to strictly enforce the law to stop all violent behaviours”.

Police said 49 people had been arrested in relation to Sunday’s protest, for suspected unlawful assembly and possession of offensive weapons.

Organisers for Sunday’s event had originally planned to march from central Hong Kong to Sheung Wan to condemn the police for firing teargas and rubber bullets on protesters last weekend. The police did not grant a permit for the march – the second time authorities have rejected a protest request – following a ban on the Saturday rally in Yuen Long.

Protesters fear authorities will adopt this line more in the future. On Sunday, one of the organisers of the Yuen Long rally, Max Chung, was arrested by police on suspicion of inciting an illegal assembly.

Some say the situation risks spiralling out of control as the public doubts the Hong Kong government’s ability to govern and Beijing is likely to pressure Hong Kong authorities to take a harder line on protesters. As protesters continue to clash with police, people have only grown more frustrated, fuelling yet more demonstrations.

“There’s a lot of public anger and I don’t think that’s going to go away soon,” said James Yip, 27, part of the group of protesters leaving Sheung Wan. “I think everyone is exhausted on both side, pro-government and pro-democracy.”

Exhaustion among protests appears to have set in as well. Amy Yeung, 26, has been attending as many protests as she can. “I am mentally tired. Watching the news, you cry,” she said. “But at least standing here, we are giving the message that we are not alone.”

On Sunday, protesters said they were more angry than exhausted and would continue. Jonathan, 19, who was resting on a curb away from the frontline in between rounds of teargas, said: “They see us as a threat because we are having an impact.”

Residents have seen Beijing’s influence over Hong Kong grow in recent years, as activists have been jailed and pro-democracy lawmakers disqualified from running or holding office. Independent book sellers have disappeared from the city, to reappear in mainland China facing charges, a point critics of the extradition bill often make.

“It seems to us that this is our last chance. If we don’t do this now, we won’t be able to later,” said Eunice Chan, 55, who grew up in Hong Kong before it was returned to Chinese control in 1997. 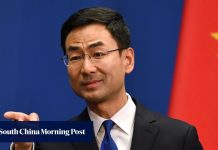 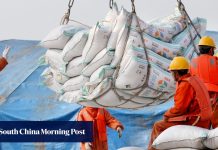 China putting US tensions over Hong Kong aside to subtly, quietly implement phase one trade deal 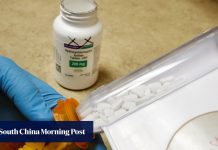 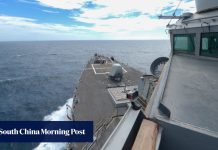 US warship sails through Taiwan Strait on Tiananmen Square anniversary 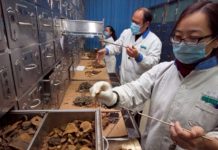