PETALING JAYA: Two Pakatan Harapan (PH) women leaders have expressed their disgust that the authorities have not taken immediate action against a secondary school teacher who is alleged to have made “rape jokes” to students during a discussion on sexual harassment.

In urging education minister Radzi Jidin to “wake up from his slumber” and act immediately, the duo said such actions by teachers will become the norm if left unchecked or the culprit is let off scot free.

DAP’s Kasthuri Patto and PKR’s Fadlina Siddiq said that making fun of rape offences is very unbecoming of teachers who are actually entrusted to impart knowledge on the dangers of such an action to the students.

Kasthuri, who said such actions by teachers could be just the tip of the iceberg, urged schools to stop protecting their teaching staff involved in making sexist comments.

“Such teachers should be removed from the education system as soon as possible before they cause more damage,” the Batu Kawan MP said in a statement.

Yesterday, a 17-year-old secondary school student claimed in a video clip, which went viral on social media, that her physical education teacher made jokes about rape during a class on sexual harassment.

She said the jokes had arisen after a discussion “about how there are a lot of laws protecting minors from sexual abuse or sexual harassment”.

“And then he said, ‘If you (students) want to rape, don’t rape someone under 18. Rape someone over 18’,” she alleged in the Tik Tok clip.

Kasthuri said the irresponsible and ignorant manner in which this particular school had handled this grave situation initially by taking a lackadaisical attitude spoke volumes about how schools tend to cover up such nefarious actions by teachers.

“This is part of the rot in the education system and something that has been happening for decades. But we should not allow this to happen any more,” she said in a statement.

The Batu Kawan DAP MP said despite the student having met the counselling teacher on this issue, there had been no mention of any action taken against the guilty teacher.

Meanwhile, Fadhlina said teachers should be advocating about the dangers of sexual harassment and rape and not making fun of these acts, adding that the government should speed up its plans to table the sexual harassment bill.

“The women, family and community development ministry should no longer delay the tabling of the sexual harassment bill in the Dewan Rakyat,” Fadhlina, who is head of PKR’s legal bureau head, said in a statement. 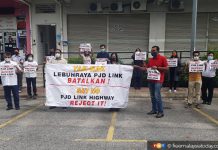