DHAHRAN: For thousands of years, mosques have served as sacred ground for Muslims around the world. But there is more than meets the eye, with Ithra’s Islamic Art Conference examining the deeper meaning and spiritual effects that mosques have on their communities.

The conference is a collaboration between the Abdullatif Al-Fozan Award for Mosque Architecture and Ithra, a leading destination for art and culture.

It was held from Nov. 24-25, and involved many perspectives, covered several themes and included studies by a group of elite speakers from around the world.

Items and pieces originally from the Two Holy Mosques of Makkah and Madinah on loan from the National Museum in Riyadh, 84 works from the Museum of Islamic Arts in Cairo under the Supreme Council of Egyptian Antiquities, and 34 objects from Ithra’s collection are showcased.

Ashraf Fagih, head of the programs division at Ithra, told Arab News: “We have philosophers, historians, the museum board of trustees and thinkers all discussing the different aspects of the mosque, not only as a building, but as a living entity which has been a vital part of human civilization since the dawn of Islam.

“When we talk about the objects, we talk about the tangible and intangible parts of the mosque, crafts, endowments, schools of thought and opinions that revolved around the mosque as a living entity. All of that is an essential and crucial part of our identity, not only as Muslims and Arabs, but as global citizens,” he added.

Using recent studies, Abdullah Al-Rashid, director of Ithra, discussed the mosque of the future, outlining its shape and function, and discussing how the 3.5 million mosques around the world will transform with time. 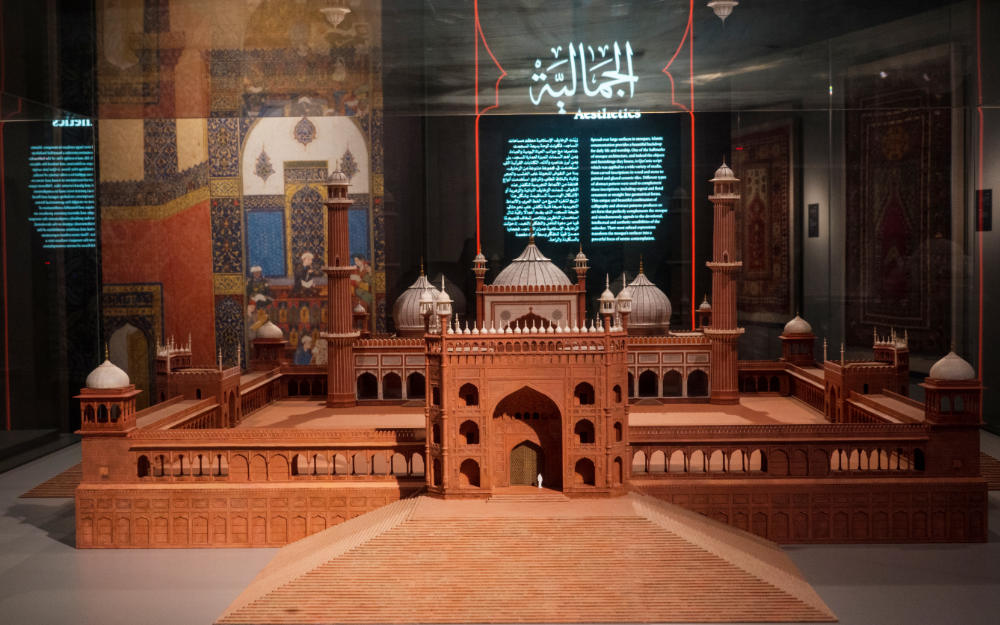 Al-Rashid announced that Ithra is launching a competition related to mosques that will focus on university students. As part of the event, organizers will gather an array of specialists from universities across the Kingdom and collect Saudi youth opinion, creative ideas and visions of future mosques.

The conference facilitates a more profound discussion and a crucial understanding of the historical development of mosques, with a particular focus on Islamic art and the preservation and revitalization of culture.

Its six themes were the evolution of the mosque, beauty, and function of mosque objects, mosque aesthetics, traditional architecture, and the preservation and revival of the mosque from mosque to museum.

One of the outstanding abstracts presented during the first day of the conference was the sonorous audible mosque, a new perspective on Islamic architecture by Michael Frishkopf, professor of ethnomusicology at the University of Alberta in Canada.

Frishkopf told Arab News: “Architecture is for life. It is to be used by people, and people live in social arrangements. In the case of the mosque, there is a spiritual relationship which involves sounds. It is critical for social life, and because of speech and expression, it conveys emotions. So I called the mosque a sonorous object, which is much closer to the spiritual function of the mosque than the visual. 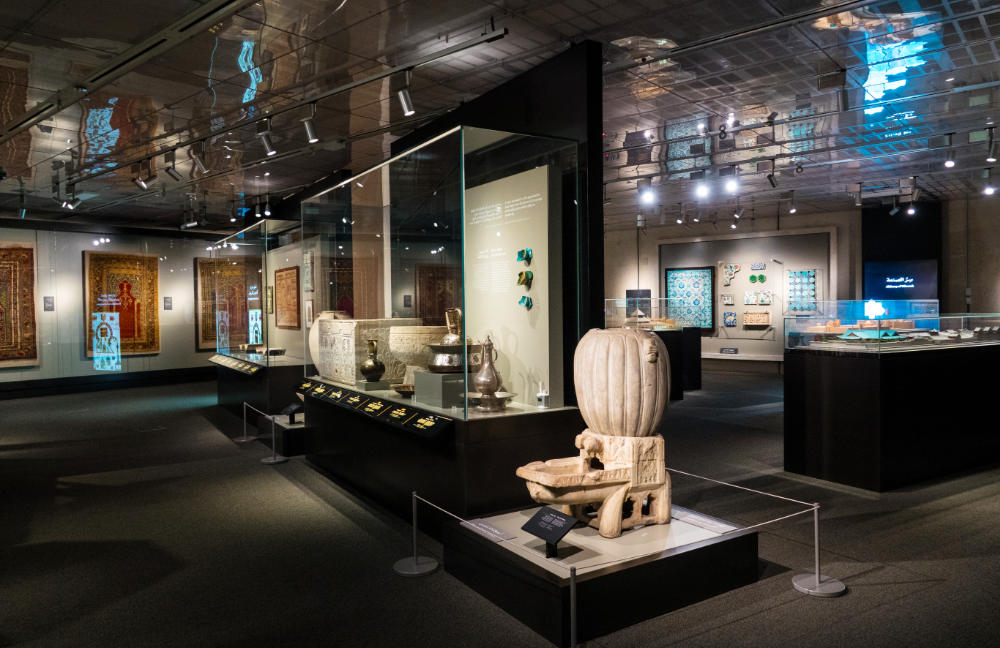 “The root of the word masjid (Arabic for mosque) is sojood, which is the act of prostration. It is a postural sonic act, so a mosque goes away behind the idea of a building, and if we look at the spiritual essence of the mosque, we should focus on prostration. As when the forehead touches the ground the visual field is blocked but the ears are open,” Frishkopf added.

The discussions featured in the conference show the value through time of mosques should be preserved and integrated into the future.

Under the theme of the revival of mosque arts, Minwar Al-Meheid, a Jordanian project manager with a particular emphasis on architectural engineering and design, discussed the Minbar of Saladin at Al-Aqsa Mosque, the most famous Islamic pulpit in design, industry and art, and how it was made with inlaid wood and carved ivory, and crafted with ornamentation and inscriptions by skilled craftsmen.

This shed light on great efforts made across the Arab world to create a substitute minbar, which would revive the remains of the original pulpit that was burned to ashes in a 1969 incident. The new version was reconstructed in Jordan by Turkish and Asian craftsmen and woodworkers, and was then relocated to Al-Aqsa Mosque. Al-Meheid said that the delicate nature of geometry in Islamic art also applies to the ancient mosque and its value.

Shatr Al-Masjid: The art of orientation

Farah Abushullaih, the head of museum at Ithra, told Arab News: “There is an increased interest in and recognition of Islamic art and culture globally, but Ithra’s research has identified established misconceptions and perceptions in this field. The complementing exhibition, “Shatr Al-Masjid: The art of orientation,” the first of its kind in the world, addresses this gap in knowledge and understanding of the significant impact, history and culture around this topic.”

Showcasing mosque aesthetics, evolution and function, the exhibit brings together the most extensive collection of Islamic art masterpieces ever displayed in the Kingdom in unprecedented partnerships on a global and national level. It features several pieces from the greatest Islamic dynasties, from the Ayyubids and Fatimids to the Mamluks and Ottomans, covering different styles and periods over 1,000 years of history.

Items and pieces originally from the Two Holy Mosques of Makkah and Madinah on loan from the National Museum in Riyadh, 84 works from the Museum of Islamic Arts in Cairo under the Supreme Council of Egyptian Antiquities, and 34 objects from Ithra’s collection are showcased.

The exhibit also showcases 10 3D models of ancient mosques from around the world displayed in a sequenced timeline, starting with Thee Prophet’s Mosque. It also shows how other mosques are inspired by their structure, function and architecture.

Dr. Sami Angawi, founder and director of the Hajj Research Center, which he established in 1975, is one of the leading researchers who helped to reach the final result of the 3D modeling of The Prophet’s Mosque in the era of Prophet Muhammad, which is displayed in the exhibition.

“I have been searching and working in Makkah and Madinah for the last 40 years. We have cooperated with Ithra in making this particular model of The Prophet’s Mosque,” Angawi told Arab News.

“Dealing with Makkah and Madinah’s mosques and reconstructing them to be showed in virtual reality through time and place is of huge significance, as we are trying to turn what is documented in books into visual reality. This is one of the results which was conducted with Ithra and we have many other things we are working on,” he added.

The exhibit uses four techniques to enhance and enrich the visitor experience: Audio guides, screens, interactive timelines and virtual reality headsets that showcase five mosques around the world. Once a visitor wears the headset, they will be taken on a tour through the mosques, which gives non-Muslims the chance to feel and walk through the Two Holy Mosques.

Abdullah Alkadi, a professor of urban and regional planning at the University of Dammam, told Arab News that tried to find links between astrolabe and GPS devices as part of his research for the exhibition. “I focused on time and space because everything, every transaction in the world falls between these two aspects,” he said.

“I was also trying to link that with GPS and with old instruments used in the past such as an astrolabe. I was trying to show how the astrolabe was introduced for the last several centuries. It was a navigating system where people can easily know time and directions and they also have used it to determine prayer time, so here lies the connection between the ancient tool and the new technology of GPS. Place and time can be utilized, analyzed and linked to many things from the past, present and future,” he added.

The Art of Masjid

On the sidelines of the Conference, an exhibit titled “The Art of Masjid” showcased contemporary works related to mosques from around the world through collaborations with Turquoise Mountain. The exhibition highlights calligraphy and architectural ornaments, including panels, furniture, prayer mats and more.

The King Abdulaziz Complex for Holy Kaaba Kiswah also took part in the three-day conference, exhibiting tools used for washing the Holy Kaaba, as well as some antiquities, a 3D model of Maqam Ibrahim and more.

Visitors were given the honor of participating in weaving part of Kiswah located over the black stone. The section will be placed later this year, using raw silk threads and silver wire coated with gold water.

Abushullaih said: “Ithra takes the conversation into communities with an outreach project, where the public can share their photos and stories for publication on Ithra’s platform. The combined information from the exhibitions and conference represents the importance of learning, disciplinary development, and the preservation of mosques and cultural heritage.” 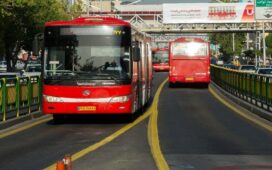 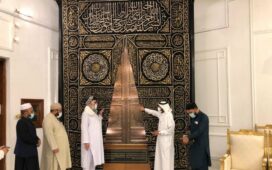 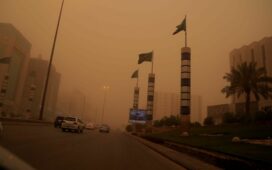 The ‘Spider-Man’ of Sudan: masked activist becomes symbol of resistance 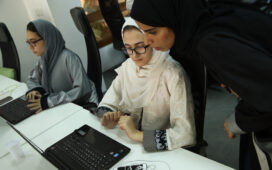