Three of the four suspects can be seen entering the salon brandishing guns in CCTV footage obtained by King 5 News.

The robbers are seen in the video walking into King Way Salon around 6pm on Sunday, 17 October demanding cash from frightened and confused staff.

“They’re asking me, ‘money, money, money.’ And I said ‘money is over there,’” salon owner Jenny told the station. “When I think about it I’m still, you know, scared right now…I have to work no matter what, right. I have my kids, my four daughters – I have to take care of them,” said Jenny, who didn’t want to give her surname to the station.

According to the local news station, in addition to emptying the till, the robbers also robbed customers and employees on their way out.

Seattle Police are investigating the incident and have said they are looking for four people in connection to the robbery.

Since the incident, the salon has been forced to upgrade its locks and security system.

The opened-mouthed ghost face mask gained notoriety following the release and success of the first Scream film in 1996. Since then, criminals have used the mask to terrorize victims while maintaining anonymity.

Last year a man in a Scream mask launched a machete attack on a group of people in Surrey leaving one victim with cuts to his abdomen.

In 2010, a group donning the mask shot and robbed a man in Brooklyn while he was working on his motorcycle. 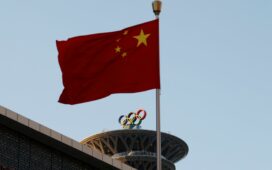