While the front row seats at getais are usually reserved for those from the spiritual realm, living spectators have to jostle for the remaining seats to catch their favourite getai stars up close in the flesh.

And unfortunately, a dispute over seat-hogging during a Hungry Ghost Festival event attributed to a bust-up at a MacPherson temple on Wednesday (Aug 10) evening.

In a Facebook video shared by Beh Chia Lor on the next day, it showed a woman in a red top throwing a chair at another woman, while the latter retaliated by hitting back at her.

A man was later seen in the minute-long clip rushing forward to throw several punches at the woman in red, which caused her to bleed profusely in the face.

While the three of them continued to push and shove each other, several shocked onlookers tried to break the fight up.

With the Facebook video garnering over 85,000 views, netizens ridiculed the elderly couple and woman for brawling at a temple.

“So old already, childish. Just walk away,” a netizen said, while another blamed the getai organiser for doing nothing to stop the fight. 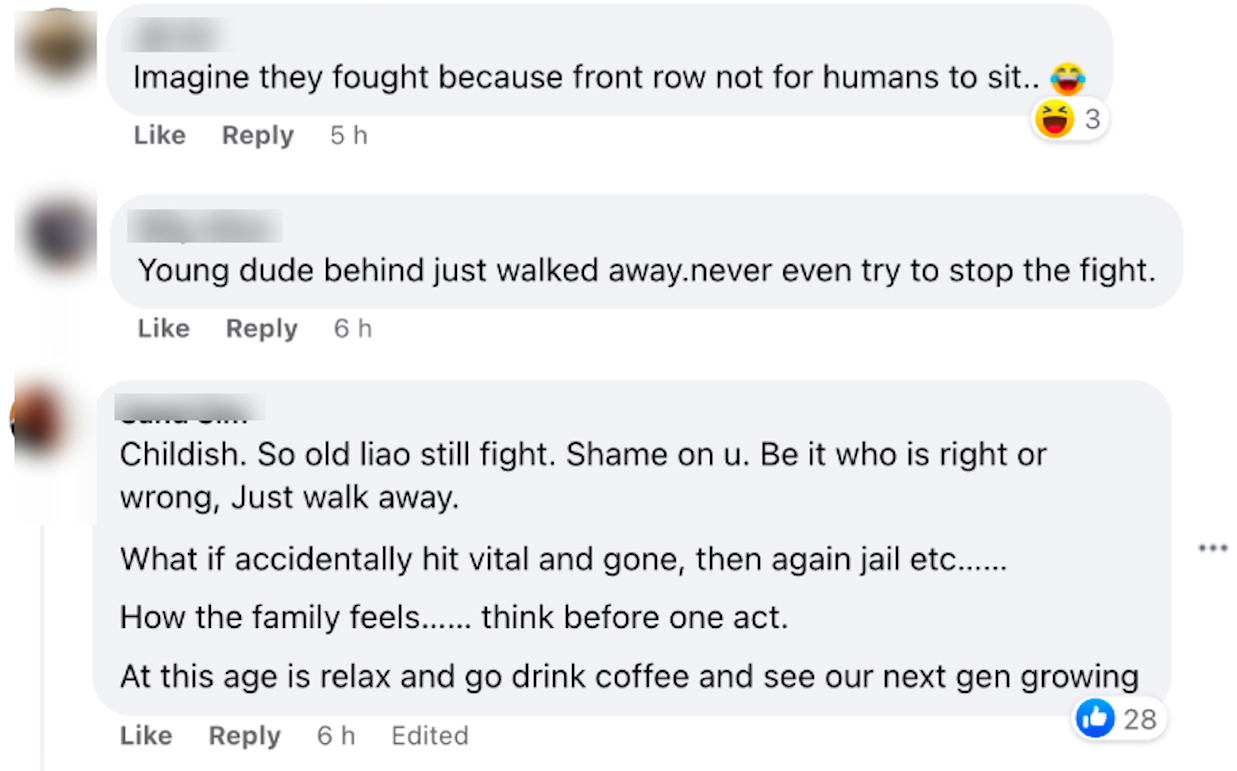 In an interview with Shin Min Daily News, 71-year-old Susan shared that she had arrived at Lorong Koo Chye Sheng Hong Temple in the morning to reserve 30 seats for the upcoming getai at 7pm.

But at around 5pm, an elderly couple sat on those seats without her permission, Susan said.

The allegedly fight broke out when the couple threw away a cup of coffee and a bun that was given by a friend, the woman claimed.

“I didn’t do anything wrong and they retaliated back,” she said, adding that she received two stitches on her face in hospital.

Responding to AsiaOne’s queries, the police said that they were alerted to the fight at 5.57pm along Arumugam Road.

A 69-year-old man, and two women aged 65 and 71, were arrested while the latter was taken to a hospital, the police added.

In another fight involving elderly folks, a brawl broke out between a 60-year-old and an 80-year-old at a Bedok coffee shop last September.

A video of the fight, which started out from a squabble over vacant seats, garnered over 41,000 views on Instagram.

ALSO READ: ‘Why no one stopped the fight?’ 5 bystanders sit idly by and watch as 2 elderly uncles fight

They’ve got a tour of their own: Westlife will return to Singapore in Feb 2023